Mymeara, known as "The Lost Behind the Veil," and "The Curs'd," is a comparatively minor Craftworld of the ancient Eldar race. With the onset of the Fall of the Eldar, and the birth of the Chaos God Slaanesh, it was thought to have been lost for all time.

After the Fall, Mymeara's citizens turned inwards, focusing upon the glories of the past -- for they believed that without them the memory of their race would fade away forever. During its long isolation, Mymeara was forced to fight for its survival against rampaging Ork hordes and the ever expanding boundaries of the Imperium. In these bloody wars a great number of Mymeara's people were slain, though they took many millions of their enemies to the grave with them. Alone and outnumbered, the Craftworld learned well the ways of stealth, and mastered the art of concealing their world-ship. In time, fate eventually reunited them with their kindred. In their ranks, the Aeldari found a host of exceptional warriors possessed of great cunning and resourcefulness.

For many millennia after the Fall, the reclusive Eldar of Craftworld Mymeara were lost in grief, for they believed themselves the only Eldar left in the galaxy. But in 894.M41, Rangers from Craftworld Alaitoc, while searching the Webway for one of their renowned Wraithseers, discovered a portal that led them to the lost Craftworld of Mymeara. Recently, the Farseers of Mymeara discovered the location of the ancient armour of the lost Phoenix Lord Irillyth, the founder of the Shadow Spectres Aspect Warriors, whose vessel had crash-landed on the Ice World of Bethalmae (known to the Imperium as Betalis III) millennia before. An alliance of Eldar forces from the Craftworlds of Mymeara and Alaitoc, as well as Eldar Corsairs from the Void Dragons, Sky Raiders, and Sunblitz Brotherhoods, descended on the frigid world to recover their beloved Phoenix Lord's armour before it was discovered and defiled by the human miners present on the planet.

In this way, the Mymearans hoped that Irillyth might be restored to fight once more for his people, since his spirit would have remained intact within his armour's Spirit Stone. After the Eldar forces fought the Imperium's forces to a bloody standstill, they vanished as quickly as they had arrived after they had recovered Irillyth. The recent war on Betalis III has seen Mymeara reunited with their kin and earned them a reputation for stealth, swiftness and intense displays of firepower. The world-rune of Mymeara, known as "The Cursing Eye," is a reference to the omniscient abilities of Asuryan, said to be able to perceive and to kill in the same instant. Asuryan's pitiless extermination of the brutal Yygghs epitomises the cull of a lesser race in its comparative infancy, eradicating it before it can grow to endanger the noble Eldar race in any way.

Mymeara's story began with the Fall of the Eldar -- the dying days of the Eldar Empire, when Slaanesh's monstrous birth shattered their civilisation, and the survivors fled in disarray across the stars. Before their race was torn apart, a small few amongst the Eldar had the foresight or, more importantly, the desire to question whether their ambitions would eventually lead them. For ultimately all experiences have a limit and those Eldar who acknowledged this could see that for their people their ways could only end in disaster. Amongst the wise few were the Eldar of the colony world of Mymeara. As their system was located on the extreme limits of the Eldar empire, the corrupting influences of the many pleasure cults that had so far infiltrated other Eldar societies had barely reached them, and so they looked upon the ever increasing extremes their brethren elsewhere in the Eldar Empire were going to with disgust and revulsion. None though could deny their growing curiosity to experience this life of moral abandonment, and the wisest of Mymeara Eldar realised that if they did not distance their population, it too would eventually be consumed by madness.

Through sheer force of will the Mymearans tempered their efforts towards building a massive Craftworld, one in which their entire system's population could flee in should they so choose. It took many decades to complete, and with each that passed the system's worlds became ever more tightly gripped by the taint that had already poisoned most of their race. Only half of their populations were on board when the vessel finally set sail, forced to flee as the acts of depravity on the worlds below them escalated into whole scale bloodshed and slaughter. The Craftworld travelled for many months until it was nearly out of range of Eldar space. This, though, was still not far enough for it to escape the event known as the Fall, and nearly a third of its population was destroyed in the psychic scream that heralded the birth of the Chaos God Slaanesh. Lost in their grief for the death of their race, the Craftworld continued to drift through the stars, believed themselves now alone in the galaxy. Their mourning though was to be brutally cut short as they fell prey to those who dwelt in the darkness beyond the once great Eldar Empire, and hundreds of thousands of Mymearans died as they fought to protect themselves from attacks by Orks and things far worse.

Irillyth, the Shade of Twilight

During these terrible times hope came to the Mymearans in the form of Irillyth, a disciple of Asurmen who strode forth one day from one of the many portals on the Craftworld that had remained inactive since their departure. Through his wisdom the warrior-citizens of Mymeara learned how to combine the aspects of stealth, speed and overwhelming firepower to utterly decimate their foe. Together the warriors of the Craftworld and the Phoenix Lord set about clearing a safe path through the galaxy for their world-vessel, hitting out mercilessly at any who dared to threaten them. Irillyth's presence upon the Craftworld was short lived though. Calling a meeting of the Council of Seers, he announced that the ultimate reason for his arrival upon the Craftworld was to prevent its utter destruction, which he had seen in a vision whilst undergoing his training with Asurmen, first of the Phoenix Lords. Centuries in the future, the Craftworld would sail through the empire of a hostile race so vast and powerful that they would neither avoid nor survive its wrath. The Phoenix Lord could prevent the doom of the Craftworld now if the Council would grant him a war host large enough to destroy the empire, which at that point in time was still in its infancy.

Bowing to the wisdom and foresight of the Phoenix Lord, half of the entire Craftworld's war host was given over to Irillyth. As the last citizen-warrior stepped across the threshold of the portal the Phoenix Lord had appeared from years before, the device was destroyed as per his instructions, for fear that the enemy would one day somehow discover how to use it to invade the Craftworld. If his war host was victorious, then the Phoenix Lord would find some other way to ensure their return. That was the last those who remained on the Craftworld saw of their brethren. As their vessel slowly drifted through systems where Irillyth had said the empire of their eventual destroyers would be, they could see that he had been true to his word and that paths of the alien race's evolution had been altered. Planets along their route had once been the site of cataclysmic battles. Whole cities had been destroyed by what could only have been Eldar weaponry, and the reptile-like aliens scavenging amongst the ruins were now little more than savages. Still though there was no sign of Irillyth and the Mymearans.

The Craftworld continued their search, and eventually encroached upon part of the dominion of Mankind. Realising that to continue through such a populated region of space would put them at terrible risk, the Seers of the Mymeara Craftworld chose instead to conceal their great world-vessel and continue their search through other means. They came to rest in a region of space that had not yet been infested by other races, and using their technology hid themselves away, drawing the stellar matter of a nearby star around the Craftworld like a shroud. There they remained for centuries, sending out Rangers in the hope of locating their lost kin. During their search the Rangers came into contact with other survivors of their race. Although the Mymearans would have preferred to remain concealed from all, even their own kind, they recognised that they would need the support and protection kinship provided and brokered an alliance of sorts with Alaitoc Craftworld and its Corsair allies; the price of their allegiance being the exchange of Eldar technology not seen by Alaitoc since the Fall.

When the Phoenix Lord was finally located in 894.M41, it was not the Mymearans who found Irillyth. Instead, whilst searching for new resources to rip from their world, Betalis III (known to the Eldar as Bethalmae), human colonists broke through into a massive cave system, the site, thousands of years before, of the final battle against those destined to destroy the Mymearan Craftworld. During the conflict Mymeara's enemies had been defeated but as the Phoenix Lord Irillyth saw in his vision, it was at the cost of his and the war host's lives. When a Phoenix Lord is slain though, he does not truly die, only the body of the warrior hosting his spirit is killed. The Phoenix Lord's essence remains within his war panoply, to be taken on by the next Eldar warrior to don it. When the colonist broke into the cave they triggered an ancient defence system within the Phoenix Lord's armour intended to protect it whilst his spirit is in a dormant state. This caused the cave-in which killed all the miners and also alerted those who still tended the Phoenix Lord's shrine on the Mymearan Craftworld to his location. Betalis III soon became the site of the Betalis III Campaign, a long running campaign fought between the forces of the Imperium defending the system and an alliance of Eldar from Craftworlds Mymeara and Alaitoc and their Corsair allies, who sought to recover Irillyth's war panoply and the spirit of the Phoenix Lord within. Betalis III was reinforced by Imperial Guard regiments drawn from the Cadian Shock Troops and the Elysian Drop Troops as well as Titans from the Legio Gryphonicus and Space Wolves Space Marines. Fighting the Imperial forces to a standstill, Mymeara was able to recover the armour of their lost Phoenix Lord and spirit it away. 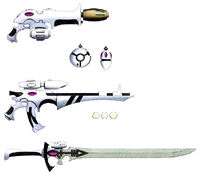 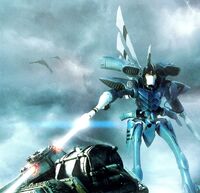 A Mymeara Revenant Titan taking out an Imperial armoured vehicle 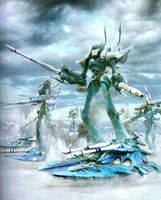 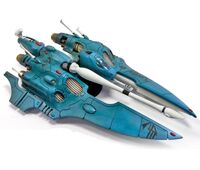 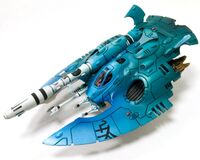 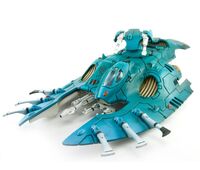 A Mymeara Wave Serpent on the surface of Betalis III 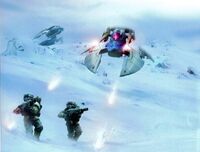 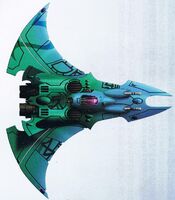 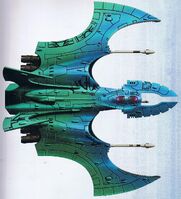 A Mymeara Vampire Hunter
Add a photo to this gallery
Retrieved from "https://warhammer40k.fandom.com/wiki/Mymeara?oldid=342714"
Community content is available under CC-BY-SA unless otherwise noted.