"Why wield a weapon when you can become one?"

A Mutilator is a vile Chaos Space Marine whose intense lust for battle and quest for the simple purity of the blade have warped his physical form until he has fused, body and soul, with his melee weaponry.

Mutilators seek not only to commune with powerful war-spirits but to absorb them, assimilating the Warp-spawned power of the various close combat weapons into their own souls and fleshmetal bodies so that they can manifest corrupted versions at will.

The exact origins of the servants of Chaos known as Mutilators is not exactly clear. It is generally believed that the first of their number were originally Terminators of the Traitor Legions who specialised in close-quarters fighting, but as with all who harbour an obsession within the Warp, they grew to become the incarnation of the murderous desires in their hearts.

Like their bretheren Heretic Astartes, they adopted an obsession with the Warp that mutated them into mindless killing machines, becoming one with the axes and swords that they hold dear. Those who dedicate themselves to the act of killing in melee cannot help but be affected by it.

The satisfying impact of a bludgeon smashing into an unprotected head, the yielding of flesh to the point of a blade or an axe's bloody bite -- even the most faithful Space Marine cannot deny that these acts bring a rush, or even a thrill, to the mind and body alike. A lifetime of unrelenting battle can breed a dangerous need for such acts of violence, and when that period spans several Terran centuries, the effects upon the psyche can be dramatic.

For those who seek refuge in the Immaterium, this psychosis is magnified beyond all reason. Such warriors might begin their descent into madness by constant maintenance of their weapons in between battle, by chaining themselves to their favoured wargear, or by outright refusing to let go of their favoured tools of war under any circumstances. These dangerously focused individuals are easy prey for the corruption of Chaos.

Before long, a warrior who yearns too much for the visceral charms of battle may find that he has fused with his weapons, the blade becoming part of him as a hand would be to a normal man. Over time, these assault specialists come to identify more with their weaponry than with their fellow Battle-Brothers. Disillusioned by the fickle nature of Mankind, they instead strive for the simple purity of the blade. As the years take their toll, such individuals leave their humanity behind altogether, becoming living weapons.

But a physical bond to their weapons is only the beginning of a Mutilator's warped transformation. As the warrior's physicality changes, his spirit fuses with the Empyrean war-spirits of destruction and butchery that flicker within his weaponry. Even the smallest scalpel has a psychic reflection in the Warp -- a splinter of potential that becomes stronger the more deaths the weapons causes.

The eldest of weapons, having claimed the hot blood of countless victims, have strong but simple war-spirits that thirst for battle. A truly ancient relic may even have a limited sentience or be possessed of a battle lust that surpasses that of its wielder.

Mutilators seek not only to commune with these war-spirits, but to absorb them, assimilating the Warp-spawned power of Chainfists, Power Axes and Lightning Claws into their own souls and fleshmetal bodies so that they can manifest corrupted versions at will, adding to their corrupted arsenal. However, Mutilators are not content to stop there -- Eviscerators and bladed siege mauls whirr and clank into being at the ends of their grotesquely muscled arms, bringing death to the enemy.

Each kill anoints and empowers the weapon-spirits that each Mutilator manifests, his dagger-sharp teeth bared in glee as he dismembers and crushes the bodies of his foes. A true Mutilator can summon whichever weapon he desires at will, transforming his distorted arms into the hell and fury of the Chaos Gods.

Mutilators are capable of manifesting many different forms of close-combat weapons on the ends of their "fleshmetal" arms. Fleshmetal is an iron-hard fusion of muscle, tendon and powered steel, forming a hideous exoskeleton over bodies that have melded with their ancient Power Armour. However, this additional protection comes at the cost of additional bulk, which can make the Mutilator move more slowly when advancing forwards towards the enemy.

Fleshmetal is the same twisted armour used by the Obliterator forces of the Chaos Space Marines, amongst other servants of the Dark Gods who have manifested the same mutation. At any one time, they can be using pairs of Chainfists, Lightning Claws, Power Axes, Power Mauls and Power Swords that erupt from their own limbs. 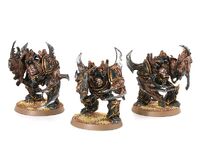 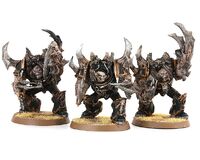 Another squad of Mutilators of the Black Legion
Español
Community content is available under CC-BY-SA unless otherwise noted.
Advertisement