The Multi-Melta is a heavier version of the standard Imperial Meltagun that is composed of multiple Meltagun barrels. The Multi-Melta is also known, like other Melta Weapons, as a "Cooker" or "Vape Gun" and is a formidable anti-personnel and anti-armour weapon.

Compared to other weapons in a similar size class, a Multi-Melta has a short range but is very potent, and produces more damage the closer it is used to a target.

A Multi-Melta works by inducing a minute, sub-molecular reaction within a highly-pressurised pyrum-petrol fuel mix located within an ammunition canister, and then projecting the resulting plasma through the canister and from the weapon's twin barrels as beams of incredible heat.

Depending on the source, this reaction is described as being emitted either as a blinding flash of pure radiant energy, a bright beam of light or simply an invisible beam of intense heat. Targets caught in the beam of a Multi-Melta are simply reduced to charred lumps of steaming, bloody flesh or, if they are armoured vehicles, to melted heaps of ceramite and metal.

No form of armour can offer protection from the sheer heat of a Melta Weapon and so a Multi-Melta is especially useful against heavily armoured units, as they melt the target from within the vehicle's hull.

Multi-Meltas appear to be composed of an assembly of two Meltagun projectors firing in synchronisation to generate a single beam. Because of its greater power, a Multi-Melta has a longer effective range than a normal Meltagun, though it is still a short-ranged weapon.

Multi-Meltas can be installed as weapons on armoured vehicles, which improves their range to some degree as they are able to draw upon the vehicle's larger power source.

The weapon system and power supply for the Multi-Melta is so heavy and bulky that they can only be carried as an infantry-portable weapons by troops with enormous physical strength or with the motive assistance provided by power armour.

As such, the weapon is only man-portable for Space Marines and the Adepta Sororitas' Sisters of Battle, who mount the weapon's heavy power pack on their backs, integrated with their power armour's power source. Multi-Meltas are a weapon only used by the forces of the Imperium of Man and those with access to Imperial weaponry, such as the Chaos Space Marines. 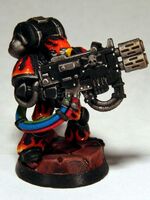 A Space Marine armed with a Multi-Melta 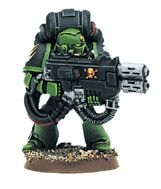 A Sister of Battle wielding a Multi-Melta