"Not of our world, but surely created for it."

The Mukaali are a species of non-sentient xenos animals utilised by the Tallarn Desert Raiders Astra Militarum regiments' specialised Rough Rider squadrons as mounts and beasts of burden. These animals originated in the vast equatorial deserts of the Imperial world of Goru-Prime, but have since been imported to other Imperial Desert Worlds such as Tallarn. These mounts are ideally suited to combat operations in arid environments.

The Mukaali is a creature perfectly adapted to a life of stifling heat and shifting sands. Tall and long-necked, a Mukaali have wide padded feet that help them move across soft sand drifts and other perilous desert terrain.

Mukaali tend to be passive creatures and extremely slow to anger. This makes them unsuited to combat, yet they are still used by numerous Rough Rider regiments, especially those that hail from the sands of Tallarn.

Mukaali are particularly useful as mounts because of their sheer stamina, which allows them to cross vast swaths of inhospitable environments without rest. These hardy beasts can go for long periods of time without food or water. This makes them an attractive proposition for long campaigns where re-supply is difficult.

In fact, Mukaali are usually much more resilient than their riders, and so their ability to endure is rarely put to anything resembling a true test. Those Tallarn Rough Rider regiments that employ Mukaali use the beasts to strategically outmanoeuvre their foes, using the tireless creatures to ride for days so that they can strike from angles unexpected.

Rough Riders are specialised mounted cavalry units found among numerous Imperial Guard regiments from Feral and Frontier Worlds where riding animal mounts remains a commonplace military skill. Many primitive cultures from such worlds retain the use of such mounted units in warfare. The Imperial Guard often employs these mounted cavalry units on the field of battle, where they are especially useful for operations undertaken on uneven terrain that is unsuitable for tracked vehicles.

These desert-dwelling herbivores are native to the vast equatorial deserts of the world of Goru-Prime. Realising their potential, these desert-dwelling herbivores soon began appearing on numerous other planets with similar climates as local tribesmen struck deals with Rogue Traders to export the beasts for many uses, including combat roles, most notably with the Imperial Guard mounted regiments hailing from Tallarn.

Many Tallarn Desert Raiders regiments' battle-honours include the right to export thousands of Mukaali from Goru-Prime every ten standard years. Some regiments no longer exercise these rights, but many still choose to do so to keep their herds of these valuable beasts from suffering from inbreeding and genetic stagnation.

Mukaali have existed on the Feral World of Naduesh in the Koronus Expanse for many generations, imported long ago by a clever Rogue Trader who realised they were a perfect fit for the wide areas of dry, desert climate on that world. Here they quickly became part of the native culture, acting as personal transport, beast of burden, and even food should conditions demand the desperate act.

Overall they have adapted very well, creating a slightly new strain unique to the world. Breeders on Naduesh discovered though that if their Mukaali were not allowed to breed in the wild, they are even more cowardly and timid than usual, barely suited for anything but the mildest of burden duties, and even then they may run away when startled.

For this reason, many herds are allowed to breed in the open plains, with herdsmen deployed to watch over them to protect from poachers or other dangers. As needed, stock is culled from these wild herds for training and resale to buyers across the Koronus Expanse and beyond.

The beasts are a common trading item and source of income for many Nadueshi tribes. Many experienced hunters travel from the Calixis Sector to pick steeds to carry them on their latest expeditions, and colonists purchase entire herds as they prepare to immigrate to the drier or hotter planets they intended to make home.

They have also been seen in use amongst several Planetary Defence Forces as military mounts, but less frequently in mercantile or mercenary bands.

One infamous Imperial Guard Brontian Longknives platoon even somehow arranged for a herd to stampede into enemy lines, shocking their foes long enough for the Guardsmen to overrun their flattened enemy.

The Mukaali (sometimes locally referred to as "Sand Pacers"), live in huge herds. Mukaali are supremely adapted to these desert environs. The species originates from far away on the world of Goru-Prime, where vast herds roamed the great scorched wastelands covering the equatorial regions. In these arid regions the beasts thrive like no other, able to live for long stretches without either food or water.

Their skin is exceptionally dense and acts both as an insulator from external heat and a barrier to prevent interior moisture from escaping. The hide protects powerful muscles, designed more for duration than sprinting but still capable of reaching good speeds over short distances. Unlike other creatures that metabolise stored fats to provide energy, the Mukaali's metabolism is acutely efficient, and can extract nourishment to an extraordinary degree.

They are grazers, living on a traditionally thin diet of tough shrubs and other sparse desert vegetation, which they chew and regurgitate through multiple stomachs and digestive organs, some beginning in their bulky necks. Each organ extracts more and more moisture and nutrients, allowing the creature to sustain itself far longer on far less than would be expected for its size. One of the major dangers in caring for the creature is overfeeding, for their digestion can be easily overwhelmed with unpleasant results.

A Mukaali can survive for long periods on very small amounts of food and water, easily outlasting a human or even the sturdiest pack animal. Conversely, they have very poor protection against cold climates and die quickly when exposed to sub-zero temperatures for any length of time. The hide protects powerful muscles, designed more for long-duration movement than sprinting but still capable of reaching a good speed over short distances.

A Mukaali's main advantage over a Terran horse is its exceptional endurance and load-bearing capability. In the driest of hot desert conditions they can keep going for solar days, even without food or water, and will long outlive a horse or even their human rider. A Mukaali-mounted Rough Rider squadron can range further afield and carry more equipment than a horse-mounted squadron.

A Mukaali's feet are adapted to move over sand at speed. Large, soft pads similar to those of a Terran camel help spread their weight to prevent their sinking into soft sand. Their thick hides generally have a mottled grey/blue colouring, running to a pink/brown underbelly.

Standing easily over two metres tall at the shoulders, Mukaali are hairless, quasi-reptilian beasts. Their tough, thick hide hangs in great folds, and is strong enough to not only provide protection from predators, but also offer a limited defence against weapons. Their sloped backs and long necks leave a perfect spot for a rider atop the Mukaali's shoulders, and while their gait is somewhat odd in appearance, their long legs allow them to travel at considerable speed.

More important to the sorts of operations for which the Tallarn Desert Raiders prefer the creatures, Mukaali can sustain their pace for long periods of time, even longer than horses. Mukaali have relatively small heads, barely broader than their thick necks, which are almost completely flat and featureless.

From a distance, it is difficult to even identify the small, deep-set eyes and nostril holes. Due to their size and gait, Mukaali require a completely different approach to handling than the horses more commonly used by Rough Riders. Those riders willing to learn are rewarded with a dependable and durable beast of burden, capable of handling much heavier loads than other comparable mounts -- a creature perfectly suited to long-term operations behind enemy lines.

Mukaali mounts can carry heavy loads and are sometimes used for transporting supplies or towing other equipment. Once broken and trained, Mukaali are well-tempered and placid creatures, if rather dim-witted, but lack any natural aggression.

They make superb riding beasts and beasts of burden in arid climates, as they quickly demonstrated during the Taros Campaign against the T'au on the former Imperial Mining World of Taros, but will not engage in combat. Even Mukaali bull males show little aggression and when faced with any danger an unmounted Mukaali always flees.

Lacking any sense of aggression, Mukaali have no actual offensive strengths other than accidentally trampling their enemies as they stride forward. Unless actively controlled, the animals quickly run from almost any perceived danger and must undergo intense training to be able to gallop forward towards enemy lines.

Despite this, the beasts take part in many operations where their tough skin, strong muscles, and survival characteristics keep them and their riders alive and fighting longer than many other mounts. 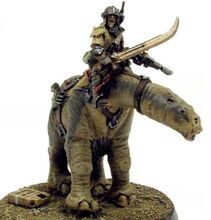 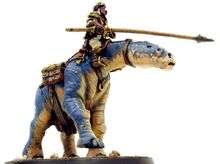 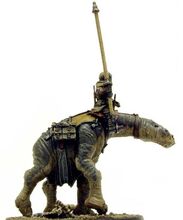 A Tallarn Rough Rider returns from a patrol
Add a photo to this gallery
Retrieved from "https://warhammer40k.fandom.com/wiki/Mukaali?oldid=348735"
Community content is available under CC-BY-SA unless otherwise noted.