The standard Castraferrum Dreadnought's loadout consists of a single long-range weapon arm, such as an Assault Cannon, and an arm ending in a Dreadnought Close Combat Weapon, yet the Mortis Pattern Dreadnought replaces the close combat weapon arm with a second ranged combat weapon. The Mortis Dreadnought is capable of unleashing a tremendous amount of firepower on a target, and since the Dreadnought's body is such a stable firing platform it can continue moving while firing accurately.

In the time of the Great Crusade, Dreadnought combat walkers primarily served as heavy assault units and highly mobile weapons support platforms for the Space Marine Legions. They were highly valued for their ability to endure under very heavy enemy fire and to operate in locations and theatres where traditional combat support vehicles would be impractical or downright impossible to use. Most in demand of all the types of Dreadnoughts in the arsenals of the Imperium were the Contemptor Pattern Dreadnought, towering war machines that utilised a combination of machine systems recovered during the Great Crusade, principal amongst them the potent and ill-understood Atomantic Arc-Reactor.

When the Legiones Astartes Contemptor Dreadnought Talons went to war they were sometimes accompanied by specialist machines to protect them from air attack. Where possible, the Contemptor-Mortis Dreadnought was fielded, for this anti-air sub-pattern of the standard Contemptor Dreadnought was equipped with an array of powerful weapons specifically designed to bring down enemy flyers, potent targeting Auguries that allowed it to lock onto and track multiple foes, as well as heavy defensive field projectors able to withstand the inevitable storm of return fire its target was sure to unleash.

Able to target and destroy the foe at close range the Contemptor-Mortis was outfitted with an advanced Helical Targeting Array that allowed it to provide a Space Marine spearhead force with close anti-air support when needed. During the last years of the Great Crusade, the Contemptor-Mortis and Mortis Dreadnought sub-patterns were widely used by both the Dark Angels and Iron Warriors Legions, although it was used to some extent by all of the Legiones Astartes during this era. Ten millennia later, there remain several Contemptor-Mortis Dreadnoughts that are still operational. They are revered both as potent relics of the Imperium's Golden Age and as powerful weapons by those few Space Marine Chapters lucky enough to still possess them.

A standard Mortis Dreadnought is armed and equipped with:

A Mortis Dreadnought may replace both their twin-linked Heavy Bolters with any of these options:

A Mortis Dreadnought armed with Missile Launchers may be equipped with the following munitions:

Mortis Dreadnoughts may also have a variety of vehicle equipment such as:

During the Great Crusade and Horus Heresy eras the Mortis Dreadnoughts of the Legiones Astartes featured many more weapon loadout options than those of the 41st Millennium.

A standard Legion Mortis Dreadnought is armed and equipped with:

Any Legion Mortis Dreadnought may replace both their twin-linked Heavy Bolters with any of these options:

A Legion Mortis Dreadnought armed with Missile Launchers may be equipped with the following munitions:

Legiones Astartes ' Mortis Dreadnoughts may also have a variety of vehicle equipment such as:

Known Users of the Mortis Dreadnought 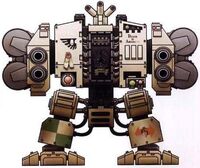 Brother Malach of the Angels of Absolution Chapter, armed with twin-linked Autocannons 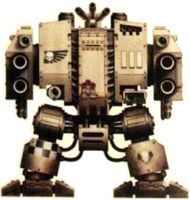 Brother Amiel of the Angels of Absolution Chapter, armed with twin-linked Lascannons 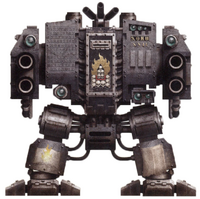 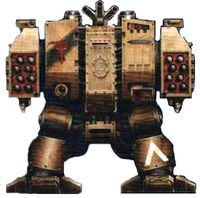 The Mark V Mortis Pattern Castraferrum Dreadnought Hellfire of the Minotaurs Chapter that fought during the Orphean War, armed with two Missile Launchers 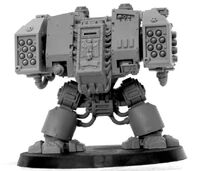 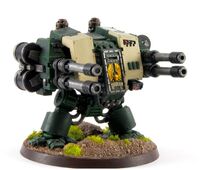 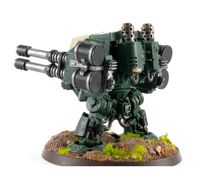