"We are the skyborne, the angels macabre, the death that strikes from above. We cut the life-cords of our foes even before they realise the mortal danger they are in. We are the storm incarnate, and we will not be denied."

Posul (Destroyed by the Tyranids)

The Mortifactors recruited from the austere Feral World of Posul, where the sun never rises on its frigid plains and its population of nomadic tribes are constantly in conflict with one another and practice cannibalism.

The Mortifactors' neophytes are chosen from the most vicious and skilled warriors on the planet -- who subsequently have a very morbid and dark outlook on life.

The Mortifactors are a dark and brooding Chapter who venerate their honoured dead to the point of obsession. Their open morbidness and celebration of death often makes their Imperial allies, especially the more superstitious ones, ill at ease.

Their grim aspect and the fear that it inspires are weapons of war as much as the guns and blades they wield, and they have been seen to use skeletal war paint, hooded robes and even bone-inlaid Power Scythes in battle.

A Successor Chapter of the Ultramarines Legion created during the Second Founding, nearly ten thousand Terran years ago, the Mortifactors are descended from the lineage that includes many of the greatest heroes of the Imperium.

An Ultramarines Captain named Sasebo Tezuka had been given command of the newly-created Mortifactors Chapter as its first Chapter Master and led it using the Emperor's Tarot for guidance to the dark, frigid world of Posul which had been granted to the Chapter by the Imperium.

There Tezuka established the Mortifactors' fortress-monastery in orbit of that dark planet and earned many honours in the name of the Emperor before his death.

On the day of the Feast of the Emperor's Ascension in 998.M41, the entire Chapter initiated a mass meditation ritual. When they returned to awareness, they collectively had prophesised in their meditative visions that the Third War for Armageddon against the Beast would be the "Last Battle" and all men who would be Mortifactors from the tribes of Posul were called up and recruited into the Chapter.

The Mortifactors entrusted their fortress-monastery to their Chapter serfs and other servants and the entire Chapter (all 10 companies) set off for Armageddon.

Upon the return of the Mortifactors from Armageddon, the Chapter set about replacing the losses incurred defending that Ork-infested Hive World.

The next campaign undertaken by the Mortifactors was assisting the Ultramarines in defending the world of Tarsis Ultra against a splinter of the Tyranids' Hive Fleet Leviathan and then sending a contingent to aid the resurrected Roboute Guilliman during the Terran Crusade of 999.M41.

The bleak Feral World of Posul is perpetually shrouded in darkness as a result of the distance it lies from its solar system's star and is thus also classified as a Night World. Its surface is craggy, frigid and mountainous.

The Mortifactors are feral warriors shaped by the harsh environment of their savage world. The barbaric warrior tribes of Posul who form the primary recruitment stock for the Mortifactors know neither sunlight nor joy. These things do not exist on Posul, whose people endure a brutal life of darkness and constant intertribal bloodshed marked by cannibalistic rituals.

Often times a Posulan youth will have taken hundreds of skulls before being chosen to become a Space Marine neophyte and earning the opportunity to slay the enemies of the Emperor, who is worshipped as the great spirit of the universe known as the "Ultimate Warrior" by the Posulan tribes.

Posul's surface and biosphere was destroyed during an assault by the Tyranids of Hive Fleet Leviathan in the Third Tyrannic War.

The ancestral home of the Mortifactors Chapter rotates slowly in the wan light of Posul and its distant sun. For nearly 10,000 Terran years, since the Mortifactors' first master, Sasebo Tezuka, led their Chapter to claim dark Posul as the Chapter's homeworld through the guidance of the Emperor's Tarot, the Mortifactors have stood sentinel over the night world of Posul.

These grim knights of the Imperium have trained members of their warrior order within the walls of their orbiting fortress-monastery since that time. In appearance, it resembles some vast mountain range cast adrift in the void of space.

The Adeptus Mechanicus' finest Tech-priests and adepts had come together to create this orbiting bastion of Imperial power: the Basilica Mortis was a marvel of arcane technical engineering that has long since been forgotten in the Imperium.

When it is fully occupied, the Basilica Mortis is home to the 1,000 battle-brothers of the Chapter and all their officers, with a supporting staff of Chapter servitors and Chapter serfs, including scribes, technomats and functionaries that number a further 7,500 souls.

Vast orbital spacedocks jut from the prow of this adamantium mountain, spearing into space with slender silver docking rings rising from the jib. At any given time, heavily-armed Mortifactors strike cruisers are berthed in the docks, with smaller, Gladius-class Frigates and Hunter-class Destroyers either returning or departing on patrol throughout the Mortifactors' domain.

The Chapter's battle barges, devastating warships of phenomenal power, are housed in armoured bays deep in the bowels of the fortress-monastery, terrible weapons of planetary destruction secured within their silent hulls.

Within the Mortifactors' fortress-monastery, the gently arched walls are smooth and sparsely ornamented. Here and there along their length, tiny niches are lit by delicate, diffuse lights, which hold stasis-sealed vessels containing some of the Chapter's holiest relics.

The halls of the Basilica Mortis are always gloomy and silent as a tomb. Every portal or chamber a visitor passes is adorned with more skulls and only upon closer inspection does one realise that none of them are carved or fashioned by human hand. All are real, bleached human skulls made dusty with age.

Though visitors will see no inhabitants of the fortress-monastery during their tour, the silence is broken by occasional snatches of hymnal dirges and somber chants of remembrance that come from the Astartes' monastic cells. From the main docking tunnel, seated statues run along its length though these forms are not actually statues carved from the living stone of the Basilica, but preserved human corpses.

But these are no ordinary corpses. Like the skulls, these seated figures are the preserved bodies of fallen battle-brothers who died in glorious combat, and now reside at the feast table of the Ultimate Warrior.

The monastery's main chapel is similarly filled, but with the skulls of the Chapter's many foes claimed in the aftermath of victory upon a thousand battlefields.

The recruitment of neophytes for the Mortifactors is done by the Chapter's Chaplains, many of whom were once the shamans or even chieftains of Posul's cannibalistic tribes.

Those who fail the trials are disposed of by the Mortifactors. Each neophyte must kill his first prey and claim its skull for himself in order to earn a name in the Chapter.

Those neophytes who have yet to kill their first enemy are called "Faceless."

Despite being the inheritors of Roboute Guilliman's gene-legacy, the Mortifactors are unusual for a Successor Chapter of the Ultramarines, because they feel that they have grown beyond the need to adhere rigidly to the dictates of the Codex Astartes, and they forge their own path in life and war using the wisdom of their Chaplains.

Despite the fact that it was their primarch that penned the words of this holiest of tomes, the Mortifactors feel that to be bound by words set down an age ago is to risk failure to adapt to changing circumstances that could prove fatal to the Chapter and the broader Imperium.

Yet the Mortifactors still venerate their primarch, just as the Ultramarines do. After all, he is their Chapter's gene-father and all the Mortifcators' oaths of allegiance are sworn to him and to the Emperor.

Yet, the Mortifactors certainly do not scorn the words of Guilliman. In fact, they look upon the Codex Astartes as the foundation for their way of life, but to follow its teachings literally without consideration for what they have learned and what they observe around them is not in their view wisdom, but blind orthodoxy.

The Mortifactors believe that a rigid adherence to any dogma is the sign of a weak mind and it is this very weakness that is causing so much of the stagnation and difficulties apparent in the wider Imperium.

Posul is populated by savage, cannibalistic feral Human tribes, who engage in ceaseless wars against one another. Their world is dark, the sun never penetrating its inky atmosphere, and the air choked with the stink of blood and smoke.

The wars of Posul have resulted in a population supremely suited to become Space Marines, yet even after the neophytes' induction and indoctrination into the ways of the Adeptus Astartes and traditions of the Ultramarines' primarch, a great amount of the feral tribes' culture remains.

While the Mortifactors are as devoted to the Emperor as any other Primogenitor Chapter, these traditions have mingled with those of the natives of Posul, resulting in something quite unique, and at times quite disturbing.

The morbid funerary rites in which the Chapter engages are led by its Chaplains, who are recruited from amongst the priest class of Posul, and many of the details of the Chapter's cult are drawn from their culture.

Amongst the many rites practised by the Mortifactors is the tradition of seeking, on the eve of battle, a trance-like state akin to death. The Mortifactors believe that in so doing they will commune with the primarch and their ancestors, who will lend them great strength when battle commences.

After the battle, the Mortifactors engage in a range of practices, often involving the drinking of the blood and the eating of the flesh of the enemy, and culminating in the severing of their head and the flensing of their skull.

To outsiders, the Mortifactors appear to be verging on the heretical, yet they stand proudly alongside their brother Primogenitors and are counted amongst the most stalwart of the Imperium's defenders.

The Chapter's Chaplains teach their fellow Astartes that death will unite them with the Emperor of Mankind in the form of a being known as the "Ultimate Warrior" and they regularly enter a state of near-death meditation prior to battles in order to determine what course the Ultimate Warrior desires for the Chapter to take in the coming conflict.

When Mortifactors do die, they believe they are taken to the Halls of the Victors and sit at the feast table of the Ultimate Warrior in the afterlife.

The existence of indigenous and often unique cult belief systems, martial philosophies and variations on the Imperial Cult within the Adeptus Astartes and on their Chapter homeworlds is not uncommon in the Imperium. However, the Mortifactors' obsessive veneration and fascination with death is of a more extreme variety and has at times brought some unwelcome Inquisitorial scrutiny.

Yet the Mortifactors deeply honour those who fall in the Emperor's service and revere the many martyrs of the Imperium and the dead of their Chapter for millennia after their fall, which generally goes far in patching up any suspicions of heresy among the Astartes of the Chapter by the Inquisition and the Ecclesiarchy.

The fleet is known to possess the following vessels:

The Mortifactors' power armour is bone white and black. The upper helm, upper legs (but not the groin), elbow plates, feet and gauntlets are black. The remainder of the armour, including the helm's faceplate and top of the backpack, is bone white.

The Aquila or Imperialis on the chest guard, as well as the main body of the backpack, are primarily silver.

A black High Gothic numeral is stenciled in its centre, indicating squad number.

The Mortifactors' Chapter badge is a bone white human skull centred upon a field of black. 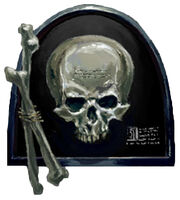 A Veteran Battle-Brother of the Mortifactors Chapter
Community content is available under CC-BY-SA unless otherwise noted.
Advertisement