A Monolith is a massive mobile fortress used by the Necrons as their primary planetary assault craft. A Monolith combines the properties of a transport craft, armoured destroyer and icon of undying Necron power. Its ponderous form can float across a battlefield upon its anti-gravitic engines, whilst its crystal core pulses with sickly energy that can be manipulated into powerful beams of Gauss lightning which whip out from its weapon mounts.

When its massive silhouette looms over a battlefield, it will lay waste to entire armies with strobing torrents of gauss fire and the deafening crack of its particle whip.Few armies can stand long before the immense firepower of a Monolith. Living troops are reduced to their component atoms by its punishing gauss flux arcs, while tanks rupture and explode in showers of molten steel as it focuses its energies upon them.

By contrast, enemy ordnance has little effect on the shell of a Monolith. When damaged, the war machine’s Necrodermis armour reflexively enacts self-repairs; sparking rents in its hull are sealed by living metal and impact craters smooth over as the reactive substance seeks to reassert its original form.

The true power of a Monolith, however, lies not in its in offensive capabilities or phenomenal endurance, but in the entrance to a captive wormhole that flickers at its core. This Eternity Gate links the Monolith to the vessels and Tomb Worlds of its Necron Dynasty -- allowing reinforcements to appear at the Monolith’s location almost instantaneously. Via these space-folding corridors, an Overlord can summon forth legion after legion of Necron Warriors from the very heart of his Tomb World, with which to drown an enemy planet in its own dead.

Nothing is more emblematic of Necron implacability than the Monolith. Like all Necron constructs, it is composed of the living metal Necrodermis: a complex semi-sentient alloy that ripples and flows and adapts its structure to repair damage in the blink of an eye. Targeting matrices, motive units, power conduits and command nodes -- all are capable of comprehensive and near-instantaneous self-repair.

When combined with the vehicle's slab-sided armour plates, this makes the Monolith one of the hardiest vehicles in the Necron's arsenal, and an incredibly daunting opponent for any enemy. Energy beams are absorbed and dispersed, whilst tank-busting missiles simply ricochet off the Monolith's armoured hide, leaving behind minor damage whose repair lies easily within the parameters of the living metal's arcane function.

Indeed, the only way to truly halt the advance of a Monolith is to target it with a sustained period of focussed fire. Only by punching through the armoured shell to the vital systems and crew within can there be any hope of ending its threat. Few enemies, however, have the discipline to be so precise under fire, and even they must be swift in their targeting lest they be disintegrated by the Monolith's formidable array of weaponry.

Even a single Monolith can muster enough firepower to be considered a small army in its own right. The most dramatic of its armaments is the Particle Whip, channelled through a glowing focus power crystal atop the vehicle. A single ear-splitting discharge from the Particle Whip is enough to reduce tanks to smouldering wrecks and infantry to molecular vapour.

Yet the Monolith's greatest and most fearsome weapon is its Eternity Gate. This shimmering energy field is nothing less than a captive wormhole, bound into the very heart of the Monolith. With a simple mental command, the Monolith's crew can transform the Eternity Gate into a portal of exile, and those that fail to resist its pull are sucked out of reality entirely; banished forever to a temporal prison from which there can be no escape.

Alternatively, the Monolith's crew can use the Eternity Gate as a form of dimensional corridor, pulling squads of Necrons from elsewhere on the battlefield, orbiting starships or even far-distant Tomb Worlds and deploying them to the Monolith’s location. So is the Monolith rightly known as a forerunner to disaster; for where a Monolith teleports onto a planet’s surface, an invading Necron army is rarely far behind…

Necron Monoliths are primarily deployed to act as a central anchor for Necron battlelines, mainly due to their abilities to quickly affect repairs upon those Necrons which teleport through its Eternity Gate, their immense firepower and near-impenetrable armour. Monoliths themselves are often deployed onto a battlefield through teleportation methods, either from within a Necron tomb or from orbiting Necron fleets.

However, Monoliths can also descend safely from great heights using their sophisticated anti-gravitic engines. Monoliths have also been observed to be carried by the even larger constructs known as Megaliths; vast mobile starfaring Necron fortresses which integrate detachable Monoliths to better deploy them as support during a planetary assault.

All Necron Monoliths are armed with a large power matrix crystal mounted atop its pyramidal form. This crystal can focus its alien energies to unleash devastating arcs of anti-matter lightning; in other words, the crystal serves as a massive Particle Whip. The explosions caused by this weapon will often affect large areas and can cause great damage to infantry and vehicles alike.

Finally, all Necron Monoliths feature a powerful wormhole portal known as an Eternity Gate which is built into their forward hull face. The Eternity Gate can act as both a dimensional portal to teleport Necrons through from other worlds or elsewhere on the battlefield, as well as significantly aiding their repair processes whilst they do so. It can also serve as another offensive weapon, a portal of exile which can suck in and banish enemies nearby into oblivion. 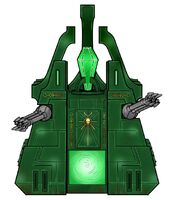 Front view of a Monolith
Add a photo to this gallery
Retrieved from "https://warhammer40k.fandom.com/wiki/Monolith?oldid=342689"
Community content is available under CC-BY-SA unless otherwise noted.