"God-Emperor, infuse this weapon with Your wrath, that I might deliver Your righteous anger unto Your enemies."

A Missile Launcher is a weapon that can fire several types of self-propelled, usually guided Missile, including both the common Frag and Krak Missiles.

Frag (Fragmentation) projectiles are designed to spray a designated area with shrapnel, making these munitions highly useful against groups of lightly armoured infantry.

Krak projectiles cover less area with their blast, but their warheads have improved armour-penetration capabilities, making them useful for taking down either heavily armoured infantry or moderately armoured vehicles.

A variant of a Missile Launcher is a Rocket Launcher, which fires unguided, self-propelled projectiles. Rockets contain the same types of warheads as a missile.

A missile is a self-propelled projectile, usually incorporating an electronic guidance system, and tipped with a high-explosive chemical, kinetic or plasma-based warhead. Missiles generally make use of a chemical rocket, jet engine or even anti-gravity drive to provide motive force, and often contain a guidance package embedded within them.

The term "rocket" usually refers to a similar self-propelled projectile which lacks an electronic guidance package and instead is fired using line-of-sight, whilst its warhead detonates on impact. Rockets are thus often termed "fire-and-forget" weapons.

Missile Launchers are used in one form or another by many of the different species and factions of the Milky Way Galaxy in the late 41st Millennium, including the Space Marines of the Imperium of Man, the Chaos Space Marines, the Orks, the Craftworld Aeldari, and the Fire Caste of the T'au Empire.

Among the forces of the Imperium, Missile Launchers are primarily used by Space Marines as one-man portable heavy weapons, as their power armour gives them the enhanced strength required to carry both the launcher and additional reloads into battle.

Imperial Guardsmen, meanwhile, use the Missile Launcher as a crew-served weapon, manned by a two-person Heavy Weapon Team, with one trooper serving as a gunner and another as the loader; when displacing positions, the first trooper carries the launcher and the other carries the tripod mount and additional ammunition reloads.

With their superhuman strength, Space Marines are capable of throwing projectiles further than some Imperial weapons can shoot. This relegates Grenade Launchers to a secondary weapon role for the Adeptus Astartes, usually affixed to a bolter or similar convenient location.

Missile Launchers are the more frequent special weapon choice when a mission calls for long-range firepower. Requisitioning a Missile Launcher includes the requisition of Frag and/or Krak Missiles as standard, enough to be sufficient and keep the weapon loaded with whatever configuration of the two missile types is desired.

Alternative missile types must be specifically requisitioned due their rarer manufacture.

Missile Launchers allow Astra Militarum troopers to fire explosives at targets outside of their throwing range, firing missiles much farther and with a vastly greater degree of accuracy than most Guardsmen could hurl similar explosives like grenades.

Missile Launchers are extremely versatile, and can be loaded with a number of different kinds of ammunition for different situations and targets. Of course, a Guardsman must first procure this appropriate ammunition, which can sometimes be as difficult as securing the launcher itself.

Missiles are extremely versatile and can potentially carry any conceivable type of warhead, including:

"Let the roar of the missile be as a war cry to reach the gods."

Frag Missiles are designed to wreak havoc in lightly armoured infantry formations, while Krak missiles can break open all but the most heavily armoured targets.

With an ample supply of both types of ammunition, a Missile Launcher is the most versatile weapon available to the Forces of Chaos. Missile launchers can be shoulder-mounted and fired by one Chaos Space Marine, but usually require teams of two if being utilised by Chaos Cultists -- the second acting as a loader and spotter.

Missile launchers are versatile weapons, and the Imperium is not the only force to make use of them. Various xenos races such as the Eldar, the Tau and the Orks also make use of such devastating weapons. 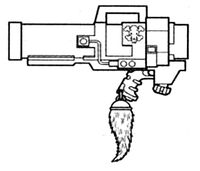 An ancient Mechanicum schematic of a Retobi Pattern Missile Launcher 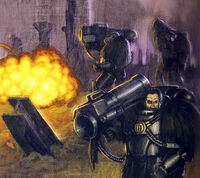 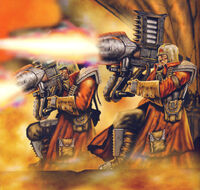 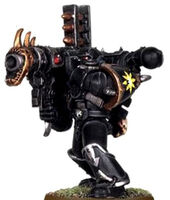 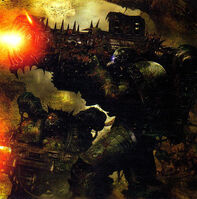 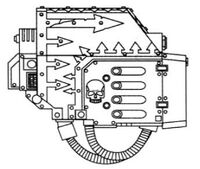 A Tau High-yield Missile Pod and its standard missile loadout 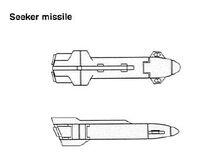 Top and side views of a Tau Seeker Missile 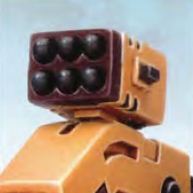