Miriael Sabathiel is a former Sister-Superior of the Adepta Sororitas' Order of Our Martyred Lady who is the only known Battle-Sister in the history of the Imperium of Man to have willingly turned to the service of Chaos, becoming a Chaos Champion of Slaanesh, the Dark Prince.

Miriael Sabathiel was a Sister-Superior of the Order of Our Martyred Lady who was declared missing in action on the world of Verdicon where a vicious battle between the forces of the Imperium and elements of the Emperor's Children Traitor Legion had taken place. She was apparently captured by the Chaos Lord Balzaropht, who corrupted her after many rounds of agonising torture, bringing her into the cult of Slaanesh. She was the first Sister of Battle to willingly fall to such disgrace.

Balzaropht had great plans for Sabathiel, but the news of her fateful return from the dead reached her Order, and the hunt led by Canoness Olga Karamanz to rescue her from the clutches of Chaos and hide her existence from the rest of the Imperium hindered her new ambitions. To put an end to the hunt, Sabathiel came to the world of Cauldrus Prime, conducted three mass-killings in such a way as to suggest this was the work of a Battle-Sister, and then hid in Namgorod, the old capital of Cauldrus Prime's freezing northern region.

Pavlov Curtz, the Regent of Kaerograd, the planetary capital of Cauldrus Prime, assumed these actions must have been performed by some Chaos imposter from the nearby embattled Pyrus Reach trying to stain the Order of Our Martyred Lady's name. He discreetly transmitted reports through ecumenic channels to alert the Adepta Sororitas' authorities to the defamation. At the same time, he sent the "Catcher-of-Men", a local bounty hunter, Lowen Tegget, to eliminate "the miscreant" in secret.

Shortly thereafter, Canoness Olga Karamanz and the veteran Battle-Sisters Elias and Bernadet secretly arrived on Cauldrus Prime and made inquiries of Regent Curtz. After appraising the situation, they immediately followed the tracker that Tegget carried at the Regent's orders, without waiting for the reinforcements Curtz wanted to gather from the Cauldrus Prime's Planetary Defence Forces, the Interior Guard, in order to prevent Miriael's existence from becoming known to the wider public, badly tarnishing the Adepta Sororitas' image.

This led Karamanz and her companions to fall into their former sister's trap -- Sabathiel used Tegget to kill the Sisters Elias and Bernadet, and then to distract the Canoness before killing her, despite Karamanz' repeated offers to find a way to redeem Sabathiel from the clutches of damnation. Thus freed from her pursuers, Miriael Sabathiel corrupted Lowen Tegget to the service of Chaos, took him as ally and servant, and stated her intention to hunt Aeldari, always the favoured prey of the servants of Slaanesh.

Miriael Sabathiel, Servant of Slaanesh, from the Dark Millennium CCG 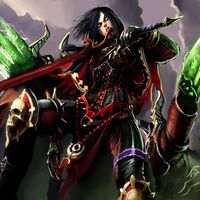 Miriael Sabathiel, Corruptor of Slaanesh, from the Dark Millennium CCG
Add a photo to this gallery
Retrieved from "https://warhammer40k.fandom.com/wiki/Miriael_Sabathiel?oldid=356257"
Community content is available under CC-BY-SA unless otherwise noted.