The Metamarines is a Loyalist Space Marine Successor Chapter of unknown origin and Founding. The most renowned action of the Metamarines is their participation in the 13th Black Crusade where they aided other Imperial forces in the defence against Abaddon the Despoiler and the Forces of Chaos unleashed upon the world of Cadia and its surrounding sectors.

The Metamarines primarily wear white Power Armour. Parts of their battle-plate is blue, including the power pack, shoulder plate trim, chest guard, torso and groin. The Aquila or Imperialis on the chest guard is golden yellow. The blue squad specialty symbol -- Tactical, Devastator, Assault or Veteran -- is located on the right shoulder plate.

The Metamarines' Chapter badge is a large white skull superimposed on a blue roundel, which is set within a red Iron Halo icon. 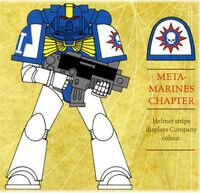 Metamarines Chapter Tactical Marine, sketch from the Insignium Astartes
Add a photo to this gallery
Retrieved from "https://warhammer40k.fandom.com/wiki/Metamarines?oldid=348919"
Community content is available under CC-BY-SA unless otherwise noted.