"Knowledge is half the battle."


— Saying of the Mentors Chapter

Unknown (Given Chapter number and colours of the Star Scorpions)

The Mentors, sometimes referred to in Imperial records as the Mentor Legion, is a Loyalist Codex Astartes-compliant Space Marine Chapter. The Mentors were raised during the 26th Founding in 738.M41, making it one of the most recently founded Chapters in the Imperium of Man.

The Mentors are known to be a reclusive and suspicious Chapter of Astartes who no longer trust other Space Marine Chapters or the Imperial government, preferring to work alone and unobserved by all save the foes of Mankind and the Emperor.

Some -- highly unreliable and apocryphal -- fragmentary records suggest that the Chapter has at times fielded warriors of unusual size, strength and fortitude.

Imperial records indicate that companies of the Mentors are currently engaged against the Aeldari of the Biel-Tan Craftworld as well as the Orks of the Charadon System.

Since the opening of the Great Rift, the Mentors have received an infusion of Primaris Space Marines. They have gained the necessary knowledge and technology to create new Primaris Astartes and to help their less advanced Firstborn brethren ascend to the new status by undertaking the dangerous surgery required by the Rubicon Primaris.

Often referred to as the "Mentor Legion" in older Imperial records, the Mentors is a 26th Founding Chapter created in 738.M41 and is the second Chapter of Astartes to be designated number 888 (the first being the now-lost Star Scorpions).

This came about because the Star Scorpions, a Chapter created during the 25th Founding, suffered from both the misfortune of producing redundant gene-seed and of becoming lost in the Warp and being utterly devastated by very powerful Warp entities. Some of its company eventually returned to Imperial space after the opening of the Great Rift as the warband of Heretic Astartes known as The Pure.

Though the Star Scorpions' ultimate fate remains unknown to the Imperium, the High Lords of Terra, acting in the name of the Emperor, declared the Chapter lost.

While stocks of the Star Scorpions' gene-seed had survived the loss of the Chapter, the high rate of mutation found within it made it useless when the Adeptus Mechanicus moved to try to reconstitute the Chapter, and eventually the Magi Biologis and their chem-architects were forced to concede defeat.

For a time it seemed that Chapter Number 888 would never be raised again, but some years later, with a new Founding in the offing, the Mechanicus was persuaded to revisit the Chapter regalia. Thus, during the 26th Founding, the Mentors Chapter was born.

It received the Chapter colours and number of the extinct Chapter but instead of the Star Scorpions' redundant gene-seed, it was granted an entirely new generation of Astartes genetic material collected from the storage banks of Terra's gene-laboratories.

The Mentors Chapter is roughly organised in much the same fashion as the Ultramarines. However, the bulk of the Chapter is never seen by outsiders as the location of its homeworld and fortress-monastery is an absolute secret.

Only the very highest Tech-priests within the hierarchy of the Adeptus Mechanicus are aware of its exact location. It is within that hidden location that the Mentors perform their rigorous training and disciplining.

While a large proportion of the Chapter's Astartes are permanently based at their secret headquarters, the balance of the Chapter is sent out on missions intended to shore up weak points in the Imperium of Man's defences.

The Mentors also deploy their battle-brothers primarily as one of two special formations, as described below.

The typical Mentors squad is organised around the archetypical Codex Astartes-approved ten-man-squad. In addition, the Mentors uphold the tradition of splitting into two groups of five battle-brothers each when in battle.

Each of the ten men in the squad is a Veteran battle-brother known as a "Tutor." There is no acting sergeant in charge of the squad, as each Space Marine holds the same rank and any of the ten may be nominated to lead, or two leaders may be selected if the squad is split into the two, five-man squad formation.

Another facet of the Mentors is the development and training of the Chapter's Elite Cadre. It was originally envisaged that these specialists would perform a number of important semi-military roles, from counter-terrorist operations to undertaking complex undercover special forces missions.

The Elite Cadres of the Mentors Chapter are the most advanced warriors of their kind within the Adeptus Astartes. They are usually deployed to achieve highly specialised military objectives that would normally be considered the role of special operations troops or commandos in other forces, such as counterterrorism, demolitions, infiltration and reconnaissance deep in enemy territory.

Elite Cadre members expect to be deployed to deal with threats that lie outside the scope of a Space Marine Chapter's standard tactical doctrines, much like a Deathwatch Kill-team. When squads of the Elite Cadre are deployed to aid Imperial Commanders across the galaxy, they are either used as traditional special operations troops to carry out crucial missions that other warriors cannot or they are broken up, with each Astartes used as a force multiplier by becoming the commander of an individual unit of frontline combat troops.

They serve as the Imperium's ultimate special operations warriors, intended to be capable of dealing with any threat outside a normal Chapter's expertise, though this aim has not been fully realised as yet. Each member of the Elite Cadre is a formidable senior Veteran Battle-Brother of the vaunted 1st Company.

These members represent the pinnacle of their Chapter's success to date. There are distinctly fewer Elite Cadre Astartes within the Chapter than normal Mentors battle-brothers, but what they lack in numbers they compensate for in sheer power, skill and application of advanced hardware.

Those chosen to become a part of the Elite Cadre are selected due to their advanced training, adaptability in battle and lateral thinking in strategic and tactical acumen. Elite Cadre Astartes seconded to other Imperial forces are often employed as squad leaders as they make especially effective commanders of Astra Militarum or Planetary Defence Forces units.

The Elite Cadres are also frequently called upon by the Inquisition which recognises their superior skill at arms. The Mentors are known to second their Elite Cadre members to other Space Marines Chapters allied with them, where their expert guidance and mastery of the military sciences enable other Astartes to achieve a unique level of knowledge and skills that will help them spread the light of the Emperor to the darkest corners of the galaxy.

The Elite Cadres are also used by the Adeptus Terra for a variety of small-scale special operations that call for the deployment of a small group of elite troops rather than the conspicuous might of an entire Space Marine force.

The Mentors Chapter is highly unusual amongst its fellow Space Marines and its modus operandi is quite different from that of the bulk of the Adeptus Astartes. The Mentors do not fight as a single force or even usually as full companies but instead second squads drawn from the Chapter's companies to supplement other Imperial military forces.

This is because one of the unusual traits of Mentors Astartes, which may derive from an unforeseen mutation within their gene-seed, is that every Mentor possesses a near-genius ability to observe, memorise and adapt to any situation.

This extraordinary capacity for learning is especially true in all matters military. The Chapter's main pursuit is therefore one of perfecting the fusion between the fruits of military science and the art of war. This extraordinary boon means that every Mentors Astartes is the equivalent of a professor of military science and military history with many standard years of combat experience.

As a result, squads of Mentors Space Marines can serve as force multipliers when they are embedded in other Imperial military forces, such as with the regiments of the Astra Militarum or the starship squadrons of the Imperial Navy. Mentors Space Marines are thus deployed at the request of the various Imperial Segmentum Commands all across the galaxy wherever their particular talents would prove to be most useful.

The basic rationale behind seconding Mentors Squads to other Imperial Adepta is that the Mentors are able to extract the maximum amount of information regarding the fighting prowess and techniques of just about any Imperial military force and thus how to improve their operational efficiency. When these squads return to their Chapter headquarters they bring with them an invaluable record which is without parallel in the galaxy.

Other Space Marine Chapters and Astra Militarum regiments to whom these squads are sent benefit from having these superior warriors join them for a campaign or battle. An extra benefit to the Mentors of this operational structure is that they are able to claim and maintain an honourable record of real combat experience despite their focus on training and research and development. As a result of this uniquely varied combat record, the Mentors have added enough citations to their Roll of Honour to make far more venerable Chapters envious.

The most experienced and skilled Mentors Astartes are Veterans who belong to a special unit somewhat similar to standard Chapters' elite 1st Companies that is known as the Elite Cadre. The Astartes of the Mentors' Elite Cadre are some of the most skilled warriors to have ever operated in the galaxy. Elite Cadre members expect to be deployed to deal with threats that lie outside the scope of a Space Marine Chapter's standard tactical doctrines.

The Mentors are based in a highly-secret fortress-monastery complex that is located on a classified world. Most of the Chapter remains within this complex at any one time, constantly training and distilling down to its essence all of the military knowledge they have gained. Select squads are chosen to leave and carry out missions for the Emperor and the competition is intense within the Chapter to be chosen for these excursions.

The Mentors Chapter enjoys close links with the Adeptus Mechanicus, and is known to be unusually technologically innovative in its own right. The Chapter also acts as a test bed for new Imperial technology recently developed by the Mechanicus. Consequently, the Mentors' equipment is of a superior standard in terms of reliability and technical complexity to that of the average Space Marine Chapter, if such a thing can be said to exist.

The Mentors prefer to work alone, even when seconded to the Deathwatch. For this reason its battle-brothers often volunteer for one-man combat duties that aid their Kill Team's mission from a distance.

The Mentors' Chapter badge was originally the stylised face of an owl, but was later changed to that of a profile of a stylised red raptor's head, centred on a field of white.

In the novel Spear of the Emperor by Aaron Dembski-Bowden it is revealed that the Mentors are a Successor Chapter of the Ultramarines.

However, in the more recent revised 8th Edition Codex: Space Marines, the Mentors are once more listed as a Chapter derived from an unknown Founding. 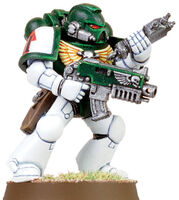 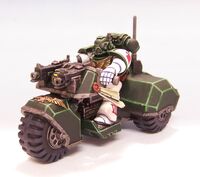