The Meltagun, also called a "Fusion Gun," "Melter," or "Cooker," is a powerful, short-ranged anti-armour weapon that produces an intense, energetic beam of heat in the tens of thousands of degrees Centigrade.

The Meltagun is used by the Space Marines, the troops of the Astra Militarum and other military forces of the Imperium of Man such as the Orders Militant of the Adepta Sororitas. Melta Weapons emit devastatingly intense but short-ranged blasts of heat which can melt through almost any material.

A Meltagun works by inducing a minute, sub-molecular reaction within a highly-pressurised pyrum-petrol fuel mix located within an ammunition canister, and then projecting the resulting plasma through the canister and from the weapon's barrel as a blast of incredible heat.

Melta Weapon usage is always accompanied by a distinctive hissing sound as the Melta beam boils away the water in the air, then a roaring blast as the beam reduces the target to charred scraps or molten slag. Meltaguns are the premier Imperial anti-armour weapons, and few if any vehicles can withstand their power.

Functionally, the Meltagun has more in common with a Plasma Gun than a Flamer. While the Flamer is used to incinerate large numbers of foes at short range, the Meltagun is used to attack point targets, destroying heavily armoured vehicles at short range by literally heating the vehicle's armour into slag and melting through to vulnerable internal components.

Meltaguns work by firing a blast of pure fusion-based heat energy that can vaporise most organic troops, and even melt Adamantium. Melta Weapons are often carried by tank-hunting squads and are used as a special weapon by other squads.

There is a larger version of the Meltagun, called the Multi-Melta, which has both an increased maximum range and is more effective as an anti-armour weapon compared to the standard Meltagun, at the cost of portability and ease-of-use. There also exists a pistol version of the Meltagun, the dreaded Inferno Pistol; however, the secrets of miniaturisation necessary to manufacture Inferno Pistols are all but lost to the Imperium.

As such, only the highest-ranking members of the Inquisition, Adepta Sororitas and Astartes are allowed to wield such a treasured weapon. Lord Dante, Chapter Master of the Blood Angels, is the most famous user of such a potent pistol.

A Cadian Shock Trooper armed with a Meltagun 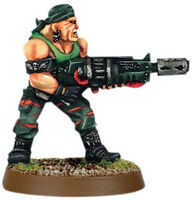 A Guardsman of the Catachan Jungle Fighters wielding a Meltagun 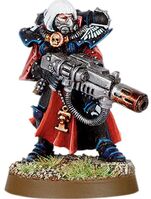 A Battle-Sister of the Adepta Sororitas employing a Meltagun