A Mekboy, (pl. Mekboyz) also known as a Mekaniak or more often simply as a Mek (also referred to as a Boilerboy in Feral Ork tribes), is a type of Ork Oddboy who build all the weapons, vehicles, and other advanced technology used by the Greenskins. Mekboyz are especially important to Ork Speed Freeks, as they maintain the prodigious amount of bikes and vehicles used by Ork warbands. Ork Meks go to war festooned in clanking, smoke-belching contraptions of their own design. These eccentric inventions confound friend and foe alike, as their purpose often remains a mystery until the big red button gets pushed. When triggered, a Mek's latest invention might fire blasts of energy that immolate swathes of the enemy, or project wobbling bubbles of gravitic force to protect nearby Boyz from harm. On the other hand, it might belch showers of sparks before engulfing its operator and everyone nearby in a roiling ball of flame. Yet occasional malfunctions are forgiven by the Orks, for even when a Mekboy's temperamental new wotsit does decide to explode, at least it gives the Boyz a good laugh.

Without Mekboyz, Orks would lack for light, power, transport, and even guns (they lack for sanitation regardless, but that's another story). Whenever an Ork needs something built, be it a shiny new Shoota or the Warboss' new ride, they go straight to the Meks. Furthermore, an Ork with teef to spare will take existing kit to the nearest Mek in the hope of having damage repaired, and maybe some kustomising done. It is a rare day that the customer gets what he asked for, but whatever the Mek turns out will normally be fairly flashy all the same.

The most important and skilled Mekboyz are known as "Big Meks," who lead groups of lesser Mekboyz armed with a wide variety of Greenskin kustom equipment and Kombi-weapons, sometimes including even full warbands or whole WAAAGHs! armed with a large amount of less-than-conventional Ork weaponry. A Big Mek's mastery of technology is unsurpassed amongst the Orkoid races and a Big Mek is often seen generating a "Kustom Force Field" around himself that protects his person and his creations. A Big Mek who becomes the leader of a Greenskin WAAAGH! will be known as a "Mek-Boss."

Orks grasp the rudiments of their technology on an instinctual level. How exactly this works remains largely a mystery, although some studies performed by the Imperial Magi Biologis suggest that this may be a result of the latent psychic potential possessed by all Greenskins. Whatever the case might be, whether Orks understand technology due to psychic powers, from hard-coded genetic memory, or simply by rote or inclination, every Ork in the galaxy can design, build, and maintain the basic weapons and vehicles used by their species. This general basic mechanical aptitude possessed by the Greenskins means each Boy in a mob can easily build and repair their own weapons, armour, and assorted wargear without having to rely on any kind of maintenance or supply infrastructure. In turn, this mobility and adaptability makes them an incredibly adaptable and frightfully efficient species. While all Orks can turn a spanner or swing a hammer to some degree, there is a group of mechanically inclined Greenskins called Mekboyz. These Orks show more than the usual basic understanding of building, jury-rigging, and bodging. Also colloquially called Mekaniaks, or simply Meks, Mekboyz are blessed with a greater ability to modify machinery than other Orks and a willingness to put these skills to use regardless of personal risks.

Strange amalgams of engineers and mad scientists, Mekboyz are the jovially imprecise craftsmen responsible for producing the bulk of Orkish wargear. They enjoy a privileged place in Orkish society thanks to their unique talent, and, along with other Oddboyz like Painboyz and Weirdboyz, make up an important part of any Warboss' retinue. Along with their mechanical and engineering prowess, Mekboyz also have a knack for assessing the nature, use, and value of a given piece of scrap or hardware at a glance. Thanks to their keen eye for, and discerning tastes in the industrial and mechanical detritus of the galaxy, they excel at using these salvaged and recycled materials to create the improbable devices clamoured for by Boyz, Nobz, and Warbosses alike.

As it is among Ork society at large, within the disparate ranks of Mekboyz, the bigger a Mek is, the more powerful he is. While it is difficult to categorize any parts of chaotic Orkish society, there are a few general divisions among Mekboyz, determined by size, cunning, and the amount of "kustom" bits and mechanical ephemera they possess. The most common (and therefore least potent) among these are the Mekboyz. These are the Meks who work by themselves or in small groups assisted by Gretchin, who operate in support of smaller Ork formations like mobs and warbands. As Mekboyz grow in size and experience, many become Big Meks. Big Meks command squads of lower-ranked Mekboyz and countless Gretchin in battle, and devise the more potent kinds of wargear fielded by Orks, such as Mega Armour  and Kustom-blastas. Some of these Big Meks, occasionally called "Mek Bosses," become so powerful that they command entire warbands or Ork tribes and have thousands of Boyz at their command. Klanz run by Big Meks are more technology-oriented, and tend to have a higher than normal concentration of "kustom" gear and Kombi-weapons among the ranks. They also have more Cyborks and advanced war machines like Deff Dreads, Mega-Dreads, Stompas, and even the highly volatile and destructive Gargants, as well.

The tools of the Mek's trade -- his massive spanners, rivet guns, welders, cutting torches, hammers, and the like -- are crude and hand-made. Each one fits the calloused hand of their creator, and withstands his constant use and abuse. In their motor pools, workshops, and foundries, Meks gleefully toil away in a cloud of cigar smoke, oily mist, exhaust fumes, and fine metal dust, attended by a small army of Gretchin attendants tasked with fetching tools, holding parts, and applying lubricants and adhesives. In these clamourous and noisome environments, Mekboyz and their assistants churn out the countless Shootas, Sluggas, Stikkbombz, bits of armour, and other wargear required to feed the ravenous Ork war machine. Mekboyz are also constantly tinkering with and "kustomizin' " their wargear, and that of other Orks, to improve its performance. Mekboyz also create kustom weapons and vehicles for Warbosses, Nobz, and any Boy with enough teef to pay for their services. Some Mekboyz even exhibit a strong inclination toward invention, and from these demented minds have sprung some of the most terrifying and dangerous war machines (both to their enemies and their users) that the galaxy has ever seen.

Ork technology captured in battle and examined by the Adeptus Mechanicus defies all description and classification. Guided by each individual Mekboy's particular, for lack of a better term, "design vision," no two pieces of Ork equipment are alike. They show no signs of standardisation or mass production, and vary so widely in their construction, design, and make-up as to make each piece of equipment essentially unique. The only commonality among Ork technology is that, as far as any learned Magos of the Priesthood of Mars can determine, every Shoota, Trukk, Lobba, and suit of Mega Armour seems to be nothing more than a random collection of scrap parts, gubbins, and metal plates bashed together in random fashion that simply should not function as advanced technology. Somehow, the Orks' ramshackle vehicles run, their terrifyingly crude flyers stay in the air despite lacking any kind of aerodynamic qualities, and their weapons to fire chattering bursts of slugs or to disgorge gouts of flame, plasma, or other types of energy, despite being seemingly nothing more than collections of flammable junk. For this to work, however, a Mekboy must have an idea of what it is that he wants to build. He cannot simply build a basic item that resembles a firearm, and then dictate what kind of ammunition it fires or what effects it inflicts on its enemies at a whim. If, for example, a Mekboy needs to build a Plasma Pistol, he begins to construct what he imagines a Plasma Pistol to be. Sometime during this process (assuming that it is not cut short in an explosive fashion), it occasionally begins to function as such, even if Imperial scholars and Tech-adepts cannot determine how this occurred.

Orks also hold numerous related and seemingly bizarre beliefs regarding the importance of colour and how it affects their wargear. Perhaps the most well-known is the widespread belief, especially among Evil Sunz and members of the Kult of Speed, that "red onez go fasta." The fact that this actually seems to have any bearing on reality continues to confound the Adeptus Mechanicus. The beliefs and superstitions of the Orks, and the gestalt psychic phenomena that accompanies them, added to each Ork's ability to carry out basic construction and maintenance of his wargear, is one of the factors that makes the Greenskins so potent and successful as a species, despite their predisposition toward shortsighted violence.

Mekboyz are clever and fiendishly inventive, driven ever onward by their instincts to ceaselessly tinker with any and all machines in their general vicinity. Given how dangerous some of these strange items can be, Mekboyz and their insane inventions can cause considerable harm to anyone unfortunate enough to be nearby even if they are not directly engaged in battle. Mekboyz tend to be extremely focused on modifying the machines around them, even once combat breaks out around them. This distraction can make it easier for careful and enterprising Imperial troops to gain the initiative during battle with them. Mekboyz often lead from the middle of the pack, surrounded by warriors, strange machines, and various Grot assistants. Mekboyz often continue to tinker with their devices during battle, enhancing the weapons used by the Boyz who follow them even as shots fly from their barrels. As such, any Boyz in a formation led by a Mekboy are likely to have customised weapons. If directly threatened, Mekboyz often defend themselves with powerful melee attacks. Occasionally, Mekboyz equip bizarre and potent ranged weapons such as the fabled Shokk Attack Gun and wreak havoc upon anyone unfortunate enough to be in their line of sight when they decide to experiment with these terrifying devices.

A Big Mek has to be both kunnin' and fixy to pilot a Morkanaut, and that goes double for Big Mek Mogrok's ladz. During the Red WAAAGH!, Mogrok gathered together some of his best Big Meks and unleashed them on the defenders of Alaric Prime by the most direct invasion vector he could devise.

An Ork Big Mek surrounded by a Kustom Force Field 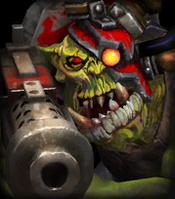 A Mekboy prepares to fire his weapon

An Ork Big Mek outfitted with a Tellyporta 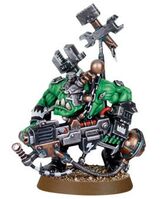 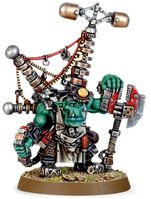 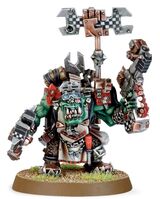 An Ork Big Mek with a Boss Pole 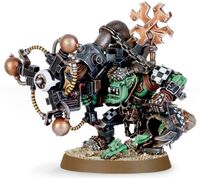 An Ork Big Mek armed with a with Shokk Attack Gun 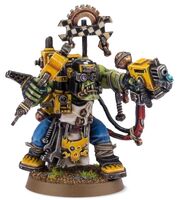 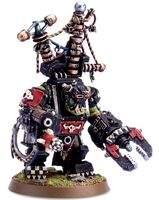 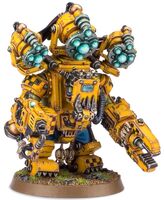