The Mawcannon is a terrible Warp-based energy weapon that is used by Soul Grinders, Plague Hulks, and Blight Drone Daemon Engines. Mawcannon is the name given to the Plague Hulk and Soul Grinder's natural ability to unleash different types of lethal Warp energies through their mouths.

The weapon-mouth of a Soul Grinder can vomit forth a torrent of burning Warpfire known as a "Baleful Torrent" which is capable of engulfing entire structures in blazing ethereal energy. The Soul Grinder's Mawcannon can also spit out huge roiling masses of mutating phlegm at incredible distances, destroying entire enemy squads in one great blast.

It can continue this form of attack throughout its time on the battlefield, which is known as a "Phlegm Bombardment." There are some Soul Grinders that are capable of using their Mawcannon to fire their whip-like tongues like searing energy rays.

All Chaos Soul Grinders are capable of using the Mawcannon in conjunction with their other weapons, such as the Iron Claw and Harvester Cannon.

The Plague Hulk is capable of vomiting forth a tide of unspeakable foulness so potent that it can rot flesh and corrode even the strongest of metal.

The Mawcannon used by Blight Drone Daemon Engines is smaller and takes the form of an actual weapon rather than a natural ability of the construct. The Blight Drone's Mawcannon is located on the front of the creature, just above its Reaper Autocannon.

The Blight Drone's phlegm attack is similar to that of the Soul Grinder, yet is smaller in area of effect and deals less damage to its targets. 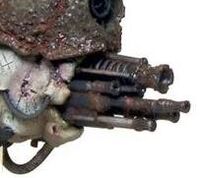 The Mawcannon (upper) and Reaper Autocannon (lower) of a Blight Drone

A Plague Hulk's Mawcannon ready to spill forth a torrent of disgusting vomit
Community content is available under CC-BY-SA unless otherwise noted.
Advertisement