"Daemonic fury, bound into the shells of metal beasts and set loose upon the galaxy. Tell me, mortal: have you ever seen such a glorious sight?"

A Maulerfiend is a Daemon Engine used by the Chaos Space Marine Traitor Legions and the forces of the Dark Mechanicum. Unlike its counterpart the Chaos Forgefiend, the Maulerfiend was designed by the Warpsmiths of the Dark Mechanicum for close-range combat. Maulerfiends thunder towards their foes like giant attack beasts loosed from the leash. The eyes of the beasts glow with the balefire of the Warp as ectoplasmic drool drizzles down through their great fanged maws.

The Maulerfiend's primary limbs end in prehensile, clawed Power Fists powerful enough to tear an Astartes Dreadnought limb from limb. Should a Maulerfiend catch a squad of less protected warriors, they will scissor them apart or simply squeeze them into paste with a flex of their claws and a growl of satisfaction.

The Maulerfiend is also known as a "Stalker-tank" or a "Scaler" to Imperial troops, as these multi-limbed monsters have the strength and agility to climb even the most sheer of walls, and no place is truly safe from a Maulerfiend that has taken the scent of its prey.

Unlike the Forgefiend, which is powered by an internal Warpfire Furnace, the Maulerfiend is powered and fulled by the rage of the daemon that inhabits it, and this amplifies the power of its weapons.

Chaos Lords often deploy Maulerfiends to disable or destroy heavily armoured targets, as the beasts will grasp hold of vehicles or emplacements and use its front, clawed Power Fists to hold its target while the Magma Cutters that protrude from its torso can focus the raw daemonic anger that burns inside it into a white-hot flame that can melt through rockcrete as thick as bastion walls. Many an Imperial Titan has been felled by Maulerfiends clambering up its legs and shearing through its joints with its claws and pinpoint magma blasts and raking adamantium claws.

Some Maulerfiends serve their masters as daemonic battering rams that barrel headlong though the enemy lines. They defend themselves from counterattacks with segmented tendrils that whip out from their thorax to crush and confound those around them who would attempt to stall their advance. These "Lashers" gorge themselves on the hot flesh of their victims until their blunt muzzles drip with blood in a twisted parody of feeding, even though they can take no sustenance from the flesh of mortals.

Once a Maulerfiend has latched on to an enemy war machine or fortification, its target's destruction is all but assured. If even a single Maulerfiend makes it to the walls of an enemy emplacement, it will clamber across the sheer faces, tapping with its claw-pincers until it finds a weak point before peeling open a large section and forcing its way inside.

Due to their utility in siege warfare, Maulerfiends are used extensively by the Warpsmiths of the Iron Warriors Traitor Legion. Even the most redoubtable Imperial defences will fall into deathly silence once a Maulerfiend has breached the walls and set upon the fleshy morsels that lie within.

Some Warpsmiths and Chaos Lords see their Maulerfiends as a feudal king might see his fiercest war hounds, and set them loose on heavily armoured targets with much the same sense of prideful satisfaction. When a Maulerfiend has latched onto its quarry, its destruction is all but assured.

The technical specifications of the Maulerfiend have not yet been determined by the Ordos of the Inquisition.

A Chaos Maulerfiend armed with two Power Fists and Lasher Tendrils as seen from behind. 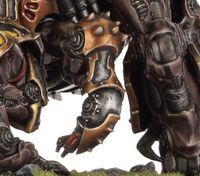