The Maugetar, or the Harvester as it is known in Low Gothic, is the weapon of Maugan-Ra, Phoenix Lord of the Aeldari and first of the Dark Reapers Aspect Warriors; sinister warriors who use ranged weapons of mass destructive power to rain death upon their foes.

The Maugetar is the pinnacle of such deadly force. As a mighty Shuriken Cannon, it is unequalled in its destructive power, and it is wedded to a blade of peerless design. The Maugetar is a triumph of brutality, though in the hands of Maugan-Ra, it can be either the scalpel or the hammer that either brings silent death to a single soul, or bloody ruin to many.

The Maugetar is Shuriken Cannon of the kind known as a "shrieker," as the discs it fires are formed in such a way that they scream as they speed towards the foe, bringing terror before they kill. The Maugetar fires shurikens of unusual size, each large and potent enough to kill a swathe of enemies before they disappear; vanishing like blood in fire.

This has led many to believe that the Maugetar is of supernatural origin, though Aeldari Bonesingers scoff at this idea and are adamant that the Reaper Lord's cannon is simply of superlative construction through arts long lost.

There are many tales of the construction of the Maugetar. All agree on but a single point -- Maugan-Ra himself crafted the weapon in a long gone age. It is only the mysterious Harlequins who dare to recount the legends of the Harvester. On rare occasions, their dances will tell one of these many conflicting accounts. The most common tells that Maugan-Ra, dissatisfied with conventional firearms, wanted to create a weapon that could harvest the souls of those it killed, a weapon fit for a reaper in the war god's own image.

Before he could build his mighty weapon, Maugan-Ra first needed to gather the necessary materials: Wraithbone touched by death, to craft the body of the cannon; metal tempered by the blood of a god, to form the scythe-blade; and the Spirit Stone of a powerful seer, to saturate the weapon with psychic energy.

Maugan-Ra's quest took him and a group of his acolytes to a Crone World, one of the planets of the Aeldari Empire of old that was consumed by the Warp after the Fall. Once home to billions of Aeldari but now nothing more than shattered ruins, this unnamed world had become home to hordes of gibbering daemons, cavorting under the baleful gaze of an impossible black sun.

The death-infused wraithbone he took from the planet's World Shrine, an ancient repository of souls, was guarded by a mighty Keeper of Secrets who was drawing the countless spirits from within it, soul by tortured soul, for the delectation of She Who Thirsts. While his Dark Reapers fired volley after volley of starstrike missiles into the Daemon, weakening it, Maugan-Ra approached and slew the beast with a single mighty blow, before harvesting the black deathbone from the Infinity Circuit.

The Phoenix Lord, accompanied by a lone Exarch, then proceeded to the very heart of the stricken world, to a hidden chamber that housed a shard of the Bloody-Handed God himself, an Avatar of Khaine. There, Maugan-Ra turned on the Exarch, sacrificing him and conducting dark rituals to awaken the Avatar.

As the war god's mortal proxy awoke, Maugan-Ra took up a piece of starmetal in the shape of a great scythe and thrust it deep into the Avatar's heart. The creature’s molten blood tempered and hardened the blade, and imbued it with the strength of Khaine himself. He unleashed the Avatar upon the Daemons, and went in search of his final target.

What followed is known in the legends as the "Night of Endless Slaughter." Maugan-Ra battled his way across the Crone World's surface and through subterranean vaults, slaying the servants of Slaanesh. Countless daemons fell to his weapons before he located what he sought –- the sanctum of the Seers who had guided the people of this world to their deaths.

There he found that those unfortunate souls were still alive, if their condition could be called life. Withered husks, unable to move but still possessed of ferocious psychic might, they attacked the Phoenix Lord with conjured beasts and magical fire, but he killed every creature, fighting through the flame and strangling each of the witches, an act of fratricide said to have torn Maugan-Ra's soul in two. Then, taking the Spirit Stones from their desiccated corpses, Maugan-Ra turned his back on that benighted world and returned to the light of gentler suns.

No Bonesinger would dare to create a weapon designed to reap souls for the Bloody-Handed God, so Maugan Ra resolved to learn the arts of weapon-smithing himself. He stole onto the Craftworld of Kinshara and abducted the Bonesinger Kaeleth, renowned as the greatest in all the galaxy. For long years, the Reaper forced Kaeleth-Tul to teach him all the secrets of his craft, which the Bonesinger did with a heavy heart, for he knew that no beauty or goodness would come from this, only death.

Then he began his great work. He grew the dark wraithbone into the shape of a great shuriken catapult that whispered the words of the dead. He implanted the Spirit Stones of the murdered seers into its heart, so that it cried with the pain of eternity. Finally, he affixed to it his mighty blade, so that the weapon might deal death to those who strayed too close as well as from afar, and so that the blade that drank the blood of a god would never go thirsty.

None can say whether these tales are true, save for Maugan-Ra himself, and none dare ask him. Sometimes, the Harlequins who tell these stories will look up from their performance and see the dark figure of the Phoenix Lord watching, his gaze always upon the Harlequin playing his role. As the players cease their dance, a hush will fall and the Reaper will nod once before disappearing to bring death once more to the enemies of the Aeldari. 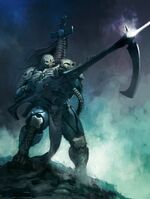