The Mastodon Heavy Assault Transport, or simply the Mastodon, is a super-heavy assault transport that was utilised by the Legiones Astartes during the Great Crusade and Horus Heresy eras. The Mastodon was one of the heaviest assault transports ever used by the Space Marine Legions, and was reserved for use against only the most heavily fortified of enemy positions.

At several times the size of a Land Raider, the Mastodon was a truly formidable war machine, capable of ferrying up to forty Space Marines, or twenty Astartes and two Dreadnoughts through the most perilous of battlefields and protecting them from the most powerful of enemy weapons, including Titans.

Although Mastodons were used by nearly every Legion, they were used sparingly during the later Great Crusade. This was because deploying them was a major operation in itself, as they were used during long, protracted siege operations where one or more entire Legion had amassed to destroy a foe that no other was capable of engaging.

As the Horus Heresy ground ever onward, the Mastodon saw an increase in its deployment rate, as both sides of the conflict committed every last weapon and vehicle to utterly destroy their hated foe.

The primary combat role of the Mastodon was the safe delivery of its Astartes passengers directly into the enemy defences, and usually used to breach fortified walls or structures using its forwards firing Siege Melta Array and heavy armoured prow. The Mastodon's forwards Siege Melta Array could create a breach through even the thickest of enemy walls, few fortifications could withstand this fearsome weapon.

Once the Mastodon creates a breach powerful interior servos fire the assault doors open, smashing aside debris and unfortunate enemies and allowing the Space Marines within to press directly into the heart of the enemy's position. Once the Space Marines begin to cross through the breach the rear ramp lowers, allowing more squads to funnel through the Mastodon and into the enemy stronghold all the while being protected by the Mastodon's heavy armour and weaponry as the Mastodon itself acts as an armoured breach tunnel.

The Mastodon is designed as the ultimate siege transport, carrying a large group of infantry straight up to the enemy's walls, breaching said walls, and protecting the infantry as they pour through the vehicle and into the interior of the enemy fortress or stronghold. The interior and exterior of the Mastodon is heavily armoured, with an armoured shell acting the interior tunnel portion of the vehicle and armoured ceramite plating protecting the exterior from enemy fire.

The interior is subdivided into different sections with armoured bulkheads that protect the different areas from fire and damage, opening to allow infantry to progress through. The vehicle's upper deck is where the driver and crew are stationed, with hatches and portholes allowing officers to direct the battle around them. The entire vehicle can be sealed closed in case the enemy makes use of chemical or viral weaponry.

The reinforced interior shell and thick exterior armour can protect the vehicle so well that even when suffering from catastrophic damage the vehicle may simply be reduced to a nearly indestructible wreck of twisted metal, acting as a small bunker that can protect those who need shelter from the storm of battle outside.

The Mastodon was as heavily armed as it was armoured, with a wide variety of weapons and technology it was fully capable of defending itself and its cargo from attack. The most important weapon of the Mastodon was its fixed forwards-firing Siege Melta Array, an array of nine melta-weapons that was used to burn through enemy walls and fortifications. The secondary weapons of the Mastodon include a turret-mounted Skyreaper Battery for protection from enemy flyers, two sponson-mounted Heavy Flamers , and two sponson-mounted Lascannons .

The Mastodon commonly comes outfitted with Smoke Launchers , a Searchlight , and Armoured Ceramite Plating and can also be equipped with up to four Hunter-Killer Missile Launchers . The Mastadon can be used a command tank, and its Skyreaper Battery can be completely replaced with a command vox relay system. The Mastodon is also equipped with two Void Shield Generators, providing even more protection from enemy fire.

A Relic Mastodon Super-Heavy Siege Transport is armed and equipped with:

During the Great Crusade and Horus Heresy eras the Mastodon Super-Heavy Assault Transports of the Legiones Astartes featured different weapon loadout options than those still found during the 41st Millennium.

A standard Legion Mastodon Super-Heavy Assault Transport is armed and equipped with:

A Legion Mastodon Super-Heavy Assault Transport may replace its turret-mounted Skyreaper Battery with one of the following:

Legion Mastodon Super-Heavy Assault Transports may also have a variety of vehicle equipment such as:

Legion Mastodon Super-Heavy Assault Transports may also be upgraded to a:

The following is a list of known campaigns that Mastodons were used in:

The frontal armoured prow and siege doors of the Mastodon 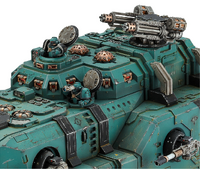