Yellow and Black
The Marauders is a Loyalist Space Marine Chapter and a Second Founding Successor Chapter of the White Scars according to the Apocrypha of Davio, written in the 33rd Millennium.

The Mantis Warriors Chapter, which grew infamous during the Badab War, was created from the gene-seed of the Marauders.

The Marauders Chapter are isolationist in their tendencies. They will fight readily enough alongside other Imperial forces, but remain aloof and exchange only what information they must to prosecute their campaigns.

Recognised for their particular aptitude as marksmen, the Marauders often set ambushes for their enemies and then hammer them with massed firepower before sweeping down to finish off the ragged and terrified survivors.

The Marauders' primarily wear yellow power armour. The Aquila or Imperialis on the chest plate is black.

A white High Gothic numeral is stenciled in the centre of it, indicating squad number.

The Marauders' Chapter badge is a black sword with its blade surrounded by a nimbus of red flames, centred on a field of yellow. 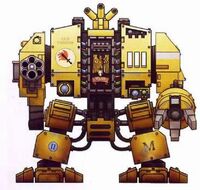 Mars Pattern Mark V Dreadnought "Vaas" of the Marauders' 9th Company; Vaas was a former Veteran sergeant of the Chapter before his interment within a Dreadnought sarcophagus and is nicknamed "Old Painless" by his battle-brothers.

The Marauders Predator Destructor Avenger, which served as part of the Thracian Response Force.