The aircraft is usually based on an orbiting starship, and can operate in the vacuum of space as well as in a planet's atmosphere. During a prolonged Imperial campaign, Imperial Navy airbases can be established on the ground, yet due to the Marauder's extreme range they are normally based safely behind the front, sometimes even on another continent from the frontlines. During ground assault missions, the Marauder Vigilant will send coordinates and pic-captures of enemy bases and other targets to the campaign's commanders, allowing the Imperial Navy's bomber wings to strike with greater accuracy or Imperial Guard regiments to develop new strategies to counter enemy movements or to plan attacks on enemy bases and other strategic installations. Sometimes experienced Imperial Navy pilots will accompany the ground forces to better coordinate these follow-on air strikes for their fellow flyers.

The Marauder Vigilant is lightly armed compared to most Imperial Navy atmospheric craft, as it features only two sets of twin-linked Heavy Bolters, one set mounted on its nose-turret and another mounted on its rear-turret. The craft does not feature a dorsal-mounted turret, or any other weaponry. The Marauder Vigilant is instead equipped with highly-sophisticated surveillance equipment that is used to safely spy on the enemy and carry out needed aerial reconnaissance. The Marauder Vigilant's advanced surveillance equipment requires a large amount of space within the airframe, and as such the aircraft's bomb-bay is modified from the standard Marauder design so that all of this surveillance gear is able to fit. This space requirement necessitates the removal of both the bomb-bay doors and the aircraft's ability to mount a dorsal-turret.

The Marauder Vigilant can be outfitted with ejection seats or a more heavily armoured cockpit, if these are not already installed, and either flare or chaff launchers which are used to confuse incoming fire, making it more difficult for enemy aircraft to damage the Imperial flyer. The aircraft can also be equipped with infra-red targeting equipment for better accuracy in certain unfavourable environmental conditions such as nighttime where the visual sighting of a target may prove difficult or impossible. A Marauder Vigilant equipped with the ability to drop illumination flares allows for increased ground and air co-ordination as aircraft fly through the lighted area, which is useful for both locating the foe on the ground and keeping track of other friendly Imperial aircraft in the sky. These aircraft can also feature distinctive environmental camouflage schemes and decals such as flames, teeth, or lightning flashes that can give nearby friendly troops a morale boost as they recognise an allied aircraft flying overhead. 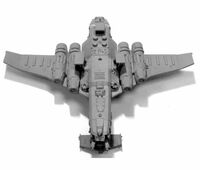 A Marauder Vigilant, ventral view
Add a photo to this gallery
Retrieved from "https://warhammer40k.fandom.com/wiki/Marauder_Vigilant?oldid=322215"
Community content is available under CC-BY-SA unless otherwise noted.