The Marauder Colossus is a variant of the standard Marauder Bomber that is used by the Imperial Navy's Aeronautica Imperialis division as its primary atmospheric bomber aircraft.

The Marauder Colossus is an uncommon variant of the Marauder Bomber and is specialised to perform high altitude strategic bombings of heavily fortified enemy positions and fortified structures such as bunkers and more extensive subterranean facilities. The Marauder Colossus forgoes the use of a multi-bomb payload in favour of a single, massive guided Melta-based Colossus Bomb of overwhelming destructive capacity.

The Colossus variant of the Marauder was first developed during the Second War for Armageddon, where it was outfitted for night operations and armed to carry out precision strikes on key fortified targets. The Marauder Colossus was accepted by the Adeptus Mechanicus after that conflict as an officially recognised variant pattern of the Marauder Bomber and it is commonly used within the Imperial Navy's bomber wings for destroying heavily fortified targets.

The aircraft is usually based on an orbiting starship, and can operate in the vacuum of space as well as in a planet's atmosphere. During a prolonged Imperial campaign, Imperial Navy airbases can be established on the ground, yet due to the Marauder's extreme range these aircraft are normally based safely behind the front, sometimes even on another continent from the frontlines.

The Marauder Colossus is lightly armed compared to most Imperial Navy atmospheric craft, as it features only two sets of twin-linked Heavy Bolters, one pair mounted on its nose-turret and another mounted on its rear-turret. The craft does not feature a dorsal-mounted turret, or any other weaponry save for the single massive bomb from which the craft gets its name, the Colossus Bomb.

The Colossus Bomb features a diamantine armour-penetrating tip, a mass reactive fuse, and an internal Melta warhead, all of which is backed up with 10,000 kilograms of high explosives. The bomb features a guidance system that is controlled from the craft that guides it to its target accurately, adjusting its tail fins until the moment of contact.

The bomb's diamantine armour-penetrating tip allows it to penetrate through thick armour plating, rockcrete, and ferrocrete before its mass-reactive fuse detonates once it's inside of its target. The Colossus Bomb's Melta Warhead is capable of destroying heavily armoured targets while the extra 10,000 kilograms of high explosives reduces anything left in an explosion whose yield is equal to that of a small, tactical nuclear blast.

The weapon has been used by the Imperial Navy as an effective Titan killer, since a direct hit from the bomb will result in catastrophic damage to any target, including God-Machines and super-heavy tanks such as the Baneblade and Shadowsword. The Marauder Colossus' bomb-bay is modified from the standard design so that the bomb is able to fit, which requires the removal of both the bomb-bay doors and the ability to mount a dorsal-turret.

The Marauder Colossus can be outfitted with ejection seats or a more heavily armoured cockpit, if these are not already installed, and either flare or chaff launchers which are used to confuse incoming fire, making it more difficult for enemy aircraft to damage the Imperial flyer.

The aircraft can also be equipped with infra-red targeting equipment for better accuracy in certain unfavourable environmental conditions such as nighttime where the visual sighting of a target may prove difficult or impossible. A Marauder Colossus equipped with the ability to drop illumination flares allows for increased ground and air co-ordination as aircraft fly through the lighted area, which is useful for both locating the foe on the ground and keeping track of other friendly Imperial aircraft in the sky.

These aircraft can also feature distinctive environmental camouflage schemes and decals such as flames, teeth, or lightning flashes that can give nearby friendly troops a morale boost as they recognise an allied aircraft flying overhead. 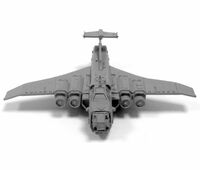 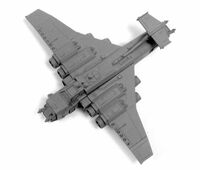 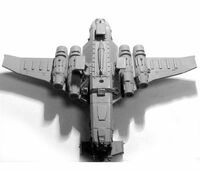