"Sure, we're slow. Sure, we make big targets. Somehow though, 6,000lbs of high-ex payload encourages the enemy not to laugh too hard about it."

The Marauder Bomber is the primary atmospheric bomber aircraft used by the Imperial Navy. The Marauder was previously used by the Imperial Navy as their primary bomber for operations in vacuum, but has since been replaced by the more powerful Starhawk Bomber. The aircraft is usually based on an orbiting starship, and can operate in the vacuum of space as well as in a planet's atmosphere.

During a prolonged Imperial campaign, Imperial Navy Aeronautica Imperialis airbases can be established on the ground, but due to the Marauder's extreme range they are located safely behind the front, sometimes even on another continent from the frontlines. During ground assault missions, the Imperial Guard forces on the ground will mark the enemy's positions with coloured flares. Sometimes experienced Imperial Navy pilots will accompany the ground forces to better coordinate air strikes.

The Marauder Bomber is the workhorse of the Imperial Navy, mostly due to its extreme range, high speed and large payload for an aircraft of its modest size. The Marauder is used in several common tactical roles such as:

Known Users of the Marauder Bomber

A Marauder Bomber of the 133rd Imperial Navy Bomber Wing, painted in arctic tundra camouflage for the Betalis IV Campaign

Marauder Bomber of the Imperial Navy 501st Bomber Wing, this particular craft fought during the Taros Campaign against the Tau 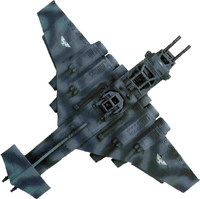 The Colossus variant of the Marauder Bomber; its 10,000 kilogram Colossus Bomb is visible near the bottom of the aircraft

A Marauder Destroyer, front right view
Add a photo to this gallery
Retrieved from "https://warhammer40k.fandom.com/wiki/Marauder_Bomber?oldid=322227"
Community content is available under CC-BY-SA unless otherwise noted.