Note: This article discusses some material that was once considered canon but now is not.

Hierarch of Anarchy and Terror, The Outcast God, the Lost God, the Renegade God

All other Chaos Gods

Malice is a renegade Chaos God and the Hierarch of Anarchy and Terror who appeared in early editions of the fictional universes of Warhammer Fantasy and Warhammer 40,000 under the name Malal.

Also known as "The Outcast God," "The Lost God" and "The Renegade God," Malice is the embodiment of Chaos' indiscriminate and anarchic tendency toward destruction, even of itself and its own agents.

The nature of Malice's powers is parasitic, as the Renegade God grows in power only when the other Ruinous Powers do. Malice's sacred number is 11 and his favoured colours are black and white.

There is a name whispered quietly and with fear even by the most depraved, the most evil, and the least sane of the worshippers of Chaos. That name is Malice, the Renegade God of Chaos. In eons past Malice was cast out from the bosom of Chaos by the other Gods, or else abandoned them of his own volition, no one is sure which.

In any case, Malice's relationship to the other gods of Chaos is a strange one. All Chaos Gods pursue purposes that are wholly their own, yet only Malice occupies a position so antithetical to the success of his own unfathomable creed. To be a follower of Malice is to be a Chaos warrior bent upon shedding the blood of other Chaos creatures.

As such, Malice is both feared and hated by the other Chaos Gods. Malice's worshippers, too, are loathed by other servants of Chaos; they are outcasts beloved by neither the friends nor enemies of Chaos, dependent upon the least whim of their patron deity. Few men worship such a god; fewer still live long in his service. The bonds that tie master and servant ever drain upon the soul of the warrior, and it is a rare man or woman that can loosen the bonds of Malice once forged.

"...and he that went before now came last, and that which was white and black and all direction was thrown against itself. Grown mightily indignant at the words of the Gods, Malal did turn his heart against them and flee into the chambers of space...And no man looked to Malal then, save those that serve that which they hate, who smile upon their misfortune, and who bear no love save for the damned. At such times as a warrior's heart turns to Malal, all Gods of Chaos grow fearful, and the laughter of the Outcast God fills the tomb of space..."


— From The Great Book of Despair

The concept of the Chaos God "Malal" was created by comics writers John Wagner and Alan Grant along with Malal's Champion, Kaleb Daark, for the Warhammer Fantasy world in the Citadel Miniatures Compendium and Journals.

In the comic strip adventure Kaleb Daark's mission allied him temporarily with the forces of Law. He fights at the siege of Praag and confronts the followers of the Chaos God Khorne, and also finds himself at odds with the Skaven.

Less mutated than other followers of Chaos, he is equipped with his soul-drinking daemon axe Dreadaxe with its pterodactyl-like head on a shaft of bone. His shield was shaped in the form of Malal's skull symbol, his armor was all-black with white details and his steed was a black mutant horse.

Kaleb himself appeared pale, as the contact with Malal supposedly drained him of energy. His battle cry was "Dreadaxe thirsts for you!"

There were three installments completed of The Quest of Kaleb Daark comic:

In the spring 1986 Journal there was also one additional page of Warhammer Fantasy Battle rules (and a small bit of Malal background) for including Kaleb Daark and his steed in games. This issue also saw the first advertisements for the miniature figure set including a mounted and standing Kaleb Daark.

The Spring 1987 Journal featured the miniature figure sets of the two Chaos Brothers, Jaek and Helwud, Kaleb's main adversaries in Part 3. Part 4 "God Amok!" was also advertised in this issue, but it never saw print. It is uncertain how much of this 4th installment was actually completed. Allegedly the comic was canceled because of "creative differences" between the creators and Games Workshop.

With the introduction of Malal in the comics, it was inevitable that the deity would find its way into the Games Workshop Chaos mythos and thereby into other products:

Use of Malal in further Games Workshop productions ceased around 1988, the same year the first of the two Realm of Chaos background books was published. Malal is not referred to or mentioned at all in these products. There was also an uncertainty as to who actually owned the rights to the concept of Malal -- the comic's authors or Games Workshop.

The one notable exception to this absence of Malal was in the Warhammer Fantasy Roleplay supplement The Dying of the Light published by Hogshead Publishing in 1995. This book featured a Chaos Sorcerer of Malal named Heinrich Bors who has struck a deal with Malal to escape from the Chaos God Tzeentch.

As the further use of Malal was restricted by Games Workshop due to copyright concerns, the authors of the Something Rotten in Kislev adventure for the Warhammer Fantasy Roleplay The Enemy Within campaign introduced "Zuvassin - the Great Undoer" and later "Necoho - the Doubter", as two renegade Chaos deities, replacing the role originally intended for Malal in this campaign.

However, the memory of Malal did not die with the ability of Games Workshop to use the Renegade God. The idea of Malal was continued on in the 1990's by veterans of the Warhammer roleplaying scene primarily through the Internet via BBS (bulletin board system) and stories (such as Divine Judgment) so Malal continued to survive, occasionally becoming the choice deity of veteran players playing Chaos. Also in Warhammer Fantasy Battle and Warhammer 40,000, the occasional Malal-themed army still surfaced.

The Shadowlord of Mordheim, Be'lakor, in Warhammer Fantasy has been seen by some fans as a revival of the idea of the renegade/outcast Chaos God originally represented by Malal. Note, however, that Be'lakor is only a Daemon Prince, whereas Malal was a true Chaos God.

One of the strongest direct references to the Renegade God from Games Workshop was made in the Warhammer 40,000 supplement Codex: Chaos Space Marines (3rd Edition - 2002). The first is the appearance of a daemonic weapon called a "Dreadaxe", which is described as preferring to kill other daemonic entities. The other reference was in a picture displaying the other possible painting schemes for the models.

One of the examples was a Chaos Space Marine of a Renegade Chapter entitled the "Sons of Malice". The colours used for this Chapter were the bisecting black/white design of Malal's original mark, and the word "Malice" is not too dissimilar from "Malal"; in essence, Malal has been returned to the Warhammer 40,000 universe as the Renegade Chaos God Malice, the Hierarch of Anarchy and Terror.

The article mentioned that the Sons of Malice were exiled from the Imperium for a set of disgusting rituals that were reported to include cannibalism and that they fought in complete silence.

The ultimate patron deity of the ritual was never revealed, though it can be surmised that it was Malice. At the end of the article it was specifically mentioned that the Sons of Malice were noted to fight with ferocity against other followers of Chaos.

The word malice comes from the Latin word Malitia, which means "bad, ill-will and spite." 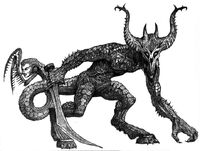