The Malcador Infernus is a variant of the venerable Malcador Assault Tank design. It is not widely used by Imperial armed forces at the present time and is in fact little known even within the Imperial military. In many regions of the Imperium, the Malcador passed out of common service many millennia ago. The few Malcadors that remain in the Emperor of Mankind's service have been relegated to the Departmento Munitorum's strategic reserve, to the arsenals of second-line Planetary Defence Forces or are maintained in active service only by a few units of the Imperial Guard due to ancient tradition. The Malcador Infernus variant has been mostly replaced by the faster and more reliable Hellhound in front-line Imperial Guard regiments. The Infernus is armed with a massive, vehicle-sized Flamer known as an Inferno Gun.

The Malcador Assault Tank is a truly ancient design dating back to the wars of the Age of Strife on Terra. During the Great Crusade, thousands of these war machines rolled off the production lines of both Mars and Voss. Though not as heavily armed or armoured as the Baneblade or Land Raider, the Malcador nevertheless possessed a number of advantages to its design, the principal of which was its battle speed and versatility. Soon, the Malcador had several variant patterns being utilised by the military forces of the nascent Imperium. One of these patterns was the Malcador Infernus. The Infernus is a flame thrower tank, in effect a huge Flamer on tracks, with a fuel trailer towed behind it. Within the trailer the Promethium fuel is stored as separate chemicals. These are mixed together in a chamber just behind the barrel to create a "jelly" that is projected out, ignited as it does so and which sticks to any surface. The massive gout of flames launched from the Inferno Gun is also effective at clearing mines, the sudden heat detonating mine fuses and making large areas safe much quicker than alternative methods.

By the time of the Horus Heresy many Malcador tanks had been relegated to strategic reserves and second line Imperial Army units, replaced by newer and more powerful designs, although the demands of the galaxy-wide civil war soon brought them back into the fray, while their availability saw them used as test-beds for a variety of new variants designed to plug gaps in supply and resource. During the Great Crusade and Horus Heresy eras, the elite Solar Auxilia employed the Malcador Infernus in specialist reserves held at the Cohort level. They were generally deployed to lead advances against enemy forces occupying especially dense terrain, such as trench lines, city ruins or heavily forested areas.

The Malcador Infernus differs the most from the standard pattern of the Malcador Assault Tank. The Infernus is quite simply a massive Flamer on tracks, with most of the tank's chassis given over to the placement of its main weapon, an Inferno Gun. An Inferno Gun is a Titan-grade Flamer weapon usually found on Warhound-class Scout Titans. The weapon is so large that there is no room on the vehicle itself for the Promethium fuel required to fire the weapon, as such the fuel is towed behind the vehicle inside of a large fuel drum attached to a large, wheeled trailer connected to the tank by an armoured fuel line. The Promethium is stored as separate chemicals before being mixed together in a chamber located behind the gun's barrel. The resulting petrochemical jelly jets out and sticks to any surface, burning with intense heat. While this weapon is powerfully effective against enemy infantry and light vehicles, this huge Flamer is also effective at clearing mine fields, using the sudden blast of heat to detonate the explosives' fuses. Unfortunately for the Infernus' crew, carrying a large amount of flammable fuel though the trailer makes the vehicle a tempting target for the enemy and the destruction of the fuel trailer can result in a large, fiery explosion. Some Infernus tank crews will use corrosive chemicals as their ammunition instead of Promethium, turning the Malcador Infernus into a deadly chemical weapon delivery vehicle. The vehicle is also armed with two sponson-mounted weapons, one on each side. These weapons can be either Heavy Stubbers, Heavy Flamers, Heavy Bolters, Lascannons, or Autocannons. The Malcador Infernus tank can be outfitted with a variety of upgrades and attachments, such as Camouflage Netting, Extra Armour Plating, an improved communications system, a Hunter-Killer Missile Launcher, a pintle-mounted Heavy Stubber, rough terrain modifications, track guards, a Searchlight, and Smoke Launchers.

A Malcador Infernus of the 6th Cadian Armoured Regiment

A Malcador Infernus of the 6th Cadian Armoured Regiment 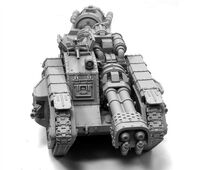 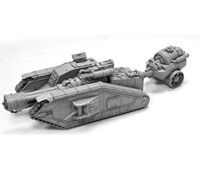 A Malcador Infernus, full-side view
Add a photo to this gallery
Retrieved from "https://warhammer40k.fandom.com/wiki/Malcador_Infernus?oldid=297728"
Community content is available under CC-BY-SA unless otherwise noted.