"Battles are won by the application of brute firepower and careful maneuvering. The greatest generals know that to master the latter allows for more repeated use of the former. "

The Malcador Annihilator is a variant of the venerable Malcador Assault Tank design. It is not widely used by Imperial armed forces at the present time and is in fact little known even within the Imperial military. In many regions of the Imperium, the Malcador passed out of common service many millennia ago. The few Malcadors that remain in the Emperor of Mankind's service have been relegated to the Departmento Munitorum's strategic reserve, to the arsenals of second-line Planetary Defence Forces or are maintained in active service only by a few units of the Imperial Guard due to ancient tradition.

The Malcador Annihilator was originally conceived as a field modification carried out on battle-damaged or unfinished production hulls intended to "up-gun" the tank's weaponry and extend its battlefield utility. The pattern's detractors hold that the variant is a hybrid intended to carry out two roles, neither of which it can fulfill with any real ability. The tank is simply too slow and too large to serve as a true "tank hunter" but is not large enough or heavily armed enough (due to the limited supply of shells for its Demolisher Cannon) to be matched against a true super-heavy tank like an Imperial Baneblade in open combat. Against other, more conventional armoured vehicles when it is part of a larger offensive force, the Malcador Annihilator can still prove its worth in the hands of a skilled crew.

The Malcador Annihilator variant of the Malcador Assault Tank replaces the standard tank's limited-traverse turret embrasure-mounted Battle Cannon with a set of twin-linked Lascannons. The tank retains the original's sponson-mounted weapons but replaces the hull-mounted Heavy Bolter with a Demolisher Cannon. The sponson weapons can carry either two Heavy Stubbers, Heavy Bolters, Heavy Flamers, Lascannons or Autocannons. The overall shape of the tank reduces the traversing range of its sponson and hull weapons, producing a limited arc of fire due to its heavy armour plating and reinforced weapons mounts. Its immobile main turret can also prove to be a problem in a chaotic engagement where the lines of battle interpenetrate and the foe's infantry or armour units can take advantage of the Malcador's limited firing arc. Experienced commanders minimize these problems by combining other armour variants and infantry support with their squadrons of Malcadors. The Malcador tank could be outfitted with a variety of upgrades and attachments, such as Camouflage Netting, Extra Armour Plating, an improved communications system, a Hunter-Killer Missile Launcher, a mine sweeper, a pintle-mounted Heavy Stubber, rough terrain modifications, track guards, a Searchlight, and Smoke Launchers.

However, the tank has another major problem, the vulnerability of its engine. The Malcador's main engine plant, a thermic combustor design that is a variant for military use of a common pattern used in industrial and agricultural machinery across the human-settled galaxy, is underpowered in relation to the Malcador's sheer size and mass. This reduces its performance and provides very poor fuel efficiency. This problem has often plagued the Malcador and its variants and has been the primary reason why this pattern of heavy tank has been relegated to second-line status amongst the Imperial military forces.

A standard Legion Malcador Annihilator Tank is armed and equipped with:

A Legion Malcador Annihilator Tank may replace its hull-mounted Heavy Bolter with any of the following:

A Legion Malcador Annihilator Tank may replace its set of sponson-mounted Heavy Bolters with any of the following:

A Legion Malcador Annihilator Tank may take one of the following pintle-mounted weapons:

Legion Malcador Annihilator Tanks may also have a variety of vehicle equipment such as:

When in a squadron of three, one Legion Malcador Annihilator Tank could be upgraded to the following:

A Malcador Annihilator of the Vraksian Traitor Militia, dorsal view

A Malcador Annihilator of the Vraksian Traitor Militia, right-side view 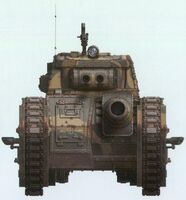 A Malcador Annihilator of the Vraksian Traitor Militia, front view
Add a photo to this gallery
Retrieved from "https://warhammer40k.fandom.com/wiki/Malcador_Annihilator?oldid=336307"
Community content is available under CC-BY-SA unless otherwise noted.