The Malanthrope (Tyranicus cadavi terriblis) is a Tyranid support bioform tasked with collecting new genetic material for a Hive Fleet to create new bioforms from or to use in genetically adapting the capabilities of existing bioforms. A rarely seen Tyranid bioform, the Malanthrope's existence has only recently been discovered by the Imperium of Man.

For a long time the Malanthrope was a complete mystery to Imperial forces because the creature's purpose meant that it only followed in the wake of a successful Tyranid swarm attack. Few Imperial troops survived long enough in these situations to witness a Malanthrope at work or, if the Tyranid swarm had been successfully repulsed, no Malanthropes would appear. As more battles were fought between the Tyranids and the Imperium, however, reports describing the Malanthrope were often mistaken for sightings of Zoanthropes.

It was not until Inquisitor Back encountered a Malanthrope on the world of Moloch II that the Ordo Xenos realised that this was a distinct new bioform and a Xenos-Hunter team was dispatched to investigate. Their subsequent report provides the main source of data about this unusual Tyranid species.

It is well known that once a battle is over and the main Tyranid combat swarm has moved on to its next target, the Ripper swarms move in, devouring anything organic in their path. These follow-up swarms are sometimes accompanied by the hideous Malanthropes. The Malanthrope's role in the Tyranid swarm seems to be to collect and process genetic material from any fallen enemies, before itself being reabsorbed along with the Ripper swarms into the Tyranid biomass. The biomass collected by the Malanthrope is then used by the Hive Fleet's Norn-Queens to create more complex bioforms.

The Malanthrope's full role is not yet understood, but some Adeptus Mechanicus Magos Biologis believe that it is seeking out unique genetic material for use in creating substantially more advanced Tyranid species. If so, they are very dangerous ceatures themselves as they may be responsible for a Hive Fleet's ability to rapidly evolve. The destruction of Malanthropes has thus recently been given top priority by the Ordo Xenos. Those few who have witnessed a Malanthrope at work report that the creature graps dead, injured and still living foes with its long, grasping tendrils, stuns them with its sting and then consumes them by feeding them into its maw with its short but highly dextrous arms. The Malanthrope's tendrils carry a venoumous poison that is cardiotoxic, neurotoxic and dermonecrotic. This toxin is injected through the skin and causes excruciating pain. This poison disables the target and the Malanthrope then absorbs its body into the bloated sacks present on its torso, where the victim's genetic material is slowly extracted and processed -- a terrible death for any individual unlucky enough to be caught still alive by the Malanthrope.

A Malanthrope is also a highly intelligent psyker with a powerful link to the Tyranid Hive Mind. Like the closely related Zoeanthrope, from which the Malanthrope bioform may have been evolved, a Malanthrope can only move by psychically levitiating itself to skim slowly over the ground like a malevolent balloon.

Notes: Often accompanied by Rippers in the wake of a Tyranid planetary assault. 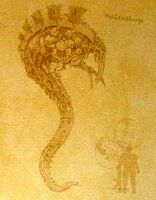 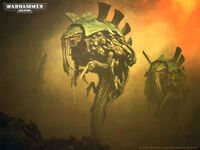 A pair of Malanthropes stalk the surface of a doomed planet
Add a photo to this gallery
Retrieved from "https://warhammer40k.fandom.com/wiki/Malanthrope?oldid=333862"
Community content is available under CC-BY-SA unless otherwise noted.