"Abide not the alien, burn his from his fastness with purifying flame and cast his ashes into the void"

This weapon is a variant of the common Ryza Pattern Plasma Blastgun commonly deployed on the Stormblade super-heavy tank. The Omega Pattern is smaller and lighter than the Ryza Pattern, as it uses a compact generator and smaller force crucible allowing it to be mounted on smaller armoured hulls, such as the Macharius. The downside of this version of the Plasma Blastgun is that it is less stable and generates considerably more heat than the Ryza Pattern, but fortunately it is also much easier to manufacture.

The Standard Template Construct (STC) design for this weapon was originally discovered by an Explorator Magos known as Hum’nal in the late 39th Millennium, but a schism within the Adeptus Mechanicus over the purity and completeness of the weapon's template delayed the testing and eventual deployment of the Omega Pattern Plasma Blastgun for centuries.

After the weapon was approved for mass manufacture, large quantities of the Macharius Omega were fabricated at the Forge Worlds of Lucius, Hellgrace, and Dynax Primus. When the Macharius Omega was finally deployed to the battlefield it proved its worth during the battles on the planets of Orask and Nicanodes where it led the Imperial counter-assaults that drove the Tyranids out of the Sable Nebula.

The Macharius Omega is also equipped with two sponson-mounted Heavy Bolters on each side. All Macharius tanks can be upgraded with the following improvements: a Hunter-Killer Missile Launcher, an improved communications system, a minesweeper, a Pintle Mounted Heavy Stubber, a Searchlight, and a Smoke Launcher. The tank's sponson weapons can be replaced with either Heavy Flamers or Autocannons.

The technical specifications of this vehicle have yet to be released for public consumption by the Adeptus Mechanicus. 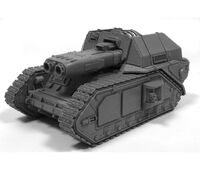 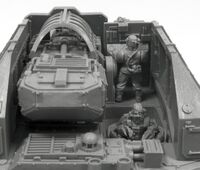 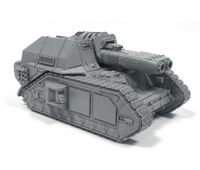 A Macharius Omega as seen from the right front side
Add a photo to this gallery
Retrieved from "https://warhammer40k.fandom.com/wiki/Macharius_Omega?oldid=337146"
Community content is available under CC-BY-SA unless otherwise noted.