Macha is a Farseer of the Eldar Craftworld of Biel-Tan. Macha was the Eldar psyker who had originally sealed the Greater Daemon in the Chaos artefact called the Maledictum on the world of Tartarus and sought to prevent its unwitting release by the agents of Mankind. Later events indicate that her destiny had become intertwined with that of Captain Gabriel Angelos of the Blood Ravens Space Marines Chapter.

When an Imperial excavation team on the Imperial Civilised World of Tartarus uncovered a Chaos marker that leads to an ancient artefact called the Maledictum, Macha mobilised a small Eldar force to ensure that the ancient artefact she had left buried on that world was left undisturbed. The Maledictum was a prison built by the Eldar millennia before to contain a powerful Greater Daemon who had been rampaging through that sector of space. Unfortunately, the Alpha Legion Chaos Sorcerer Sindri Myr was also keen to acquire the power of the Maledictum to ensure his own ascension to Daemon Prince, and so set in motion a scheme that would uncover the artefact and unlock its power for himself.

The Forces of Chaos were now aware of the existence of the Chaos marker and of the artefact itself. A warband of Chaos Space Marines drawn from the Alpha Legion, led by the Chaos Lord Bale, made planetfall upon Tartarus before the Imperial forces ever responded. The world's defenders had sent an astropathic distress call to the Imperium after Tartarus had been assaulted by an Ork WAAAGH! led by the Warboss Orkamungus which had been enticed to invade the world by Sindri Myr to serve as a cover for the Alpha Legion's pursuit of the Maledictum. The forces of the Imperial Guard soon responded to the Greenskin assault, but the conflict with the Orks kept the Imperial forces engaged while Bale and his Chaos Space Marines worked unseen to recover their prize. Farseer Macha knew that the Orks' WAAAGH! was tied in some manner to the presence of the ancient artefact, and was adamant that the Forces of Chaos could not be allowed to obtain the Maledictum.

Inquisitor Mordecai Toth of the Ordo Malleus had also long been searching for some time for the dark artefact. Farseer Macha, always contemptuous like most Eldar of the willpower of humans in the face of the temptations of Chaos, believed that the Imperium, even its Inquisition, could not be trusted with the handling of the Maledictum. As such, she deployed with a force of warriors from Biel-tan to Tartarus to reclaim the Maledictum and keep it out of the easily corrupted hands of Mankind.

Four armies then came together on the planet Tartarus: the invading Orks, the defending Imperial Guard and their Space Marine allies amongst the Blood Ravens Chapter, the insidious Chaos Space Marines of the Alpha Legion, and the enigmatic Eldar of Biel-tan. Using her potent psychic divination abilities, Farseer Macha tried to formulate a battle plan that would keep the Maledictum safe.

The Maledictum required the recovery of a special key to unlock it. Captain Gabriel Angelos and his 3rd Company of the Blood Ravens, who had been assigned to assist the Imperial Guard in throwing back the Ork invasion of Tartarus, had also learned of the existence of the Maledictum in the course of the campaign. The Blood Ravens wanted to find and destroy it in order to keep it out of the hands of the Forces of Chaos which they had learned were also operating on the planet. In a desperate attempt to guard the key, Farseer Macha called upon the Eldar War God Kaela Mensha Khaine and one her Eldar Exarchs made the ultimate sacrifice to become the Avatar of Khaine. Unfortunately, it had been Sindri Myr's plan all along for the Eldar and the Blood Ravens to meet in combat. Whilst the Eldar and the Space Marines were distracted fighting each other, Sindri stole the key. To make matters worse, the Avatar of Khaine was eventually slain by the Space Marines, leaving the remaining Eldar forces on Tartarus after the battle greatly weakened.

Like a skilled puppeteer, Sindri masterfully controlled the tides of battle. The Chaos Sorcerer even orchestrated the demise of Lord Bale so that he could command the Chaos Lord's warband as his own and he ultimately acquired the Maledictum by corrupting the Blood Ravens' Librarian, Isador Akios.

Farseer Macha soon realized that her destiny and Gabriel Angelos's destiny were intertwined, and it was folly to try and deny it. Farseer Macha was forced to use her remaining Biel-tan forces to support Angelos and his Blood Ravens as he assaulted Sindri and the forces of the Alpha Legion in a final attempt to take the Maledictum back from the servants of the Ruinous Powers before they could unleash its power.

The Maledictum granted Sindri the rank, powers, and form of a Daemon Prince. With the support of Macha's Eldar, his fellow Blood Ravens, and the Daemonhammer God-Splitter gifted to him by the Inquisitor Toth, Gabriel was ultimately able to destroy the ascended Sindri in single combat.

But Macha's hopes and renewed faith in Mankind were dashed when, urged on by Toth, Angelos ignored her warnings and destroyed the Maledictum with God-Splitter, accidentally setting the Greater Daemon of Khorne kept imprisoned within the stone for millennia free. Farseer Macha told Angelos that his actions had damned them all, before departing from Tartarus with her small Eldar force as a Warp Storm moved to engulf the ravaged world.

Macha swore a vow to kill Angelos after he ignorantly destroyed the Maledictum, releasing the Greater Daemon it contained back into realspace. Macha thought twice about this murderous pledge after being put in a desperate situation when the Necrons were awakened on the Tomb World called Rahe's Paradise. The Eldar originally began targetting human psykers on the planet, the presence of which were weakening a device called Lsanthranil's Shield meant to keep the Necrons on the world in their slumber. Although the machine was restored to full power by the Farseer, preventing the Necron Lord from awakening, disaster came when the Blood Ravens Space Marine Strike Cruisers Ravenous Spirit and Rage of Erudition destroyed the Eldar vessel Reaper's Blade, releasing the contents of the Dark Reapers spirit pool aboard the ship into the atmosphere of Rahe's Paradise. The psychic feedback caused by this shattered Lsanthranil's Shield and roused the Necron buried beneath the world's surface.

After fighting a retreating battle back into orbit, both the Eldar and Space Marine forces engaged the Necron space craft ascending from the surface of the planet. Soon, however, a Necron Shroud Cruiser rose from the surface and fled for the system's star, intending to use the energy of the star to recharge itself. While the two remaining Eldar craft, the Eternal Star and the Avenging Blade, along with the Ravenous Spirit, gave chase, the Strike Cruiser Rage of Erudition performed an Exterminatus upon Rahe's Paradise. This destroyed the planet and any remaining Necrons on its surface. As the Necron starship drained the energy from the star, recharging itself enough to enter combat, it fired a plasma arc at the Eternal Star, causing tremendous damage and effectively knocking the Eldar vessel out of the battle. The battle was won, however, when the Ravenous Spirit fired its Exterminatus array directly upon the Necron Shroud-class Light Cruiser, causing an internal explosion which led to an overwhelming power surge, destroying the Necron threat.

At the same time, the Necrons were also rising in the Lorn System, roused by the Necron awakening at Rahe's Paradise. It is here that Macha and Gabriel Angelos next encountered each other on the Ravenous Spirit above the Lorn System's star. It is here that the humans and the Eldar joined forces once again to combat the Necron threat. In the ensuing battle, Macha's starship, the Eternal Star, was destroyed. Macha received the blade known as the Wrath of Vaul from Angelos, who himself had recieved it from a Harlequin Troupe after facing off against the Sorcerer Ahriman of the Thousand Sons, who wanted the blade for himself. It then appeared that Macha transmutated her body into a pulse of green, psychic Warp fire using the blade, that lanced out from the front of the Strike Cruiser. A similar devastating attack was launched by the Litany of Fury in the form of its Exterminatus Array, and both struck the Necron Scythe-class Cruiser leading the Necron forces. The Necron Cruiser detonated, opening a void in the Warp through which all the remaining Necron forces were pulled. It is unknown if Farseer Macha survived her final transformation, for she was neither seen nor heard of afterwards by the remaining Blood Ravens.

Macha again appeared alongside the forces of the Blood Ravens during their campaign on the world of Acheron, leading Eldar forces in an attempt to claim the mysterious artefact called the Spear of Khaine. During the battle against the Blood Ravens, Macha was able to negotiate a temporary alliance with Gorgutz's Orks, and was able to eventually find the vault of the Spear. However, when it became clear that the Chaos forces risked erupting from the planet, Macha urged Gabriel Angelos to use one of his Chapter's Battle Barges and Gorgutz to use an explosive-filled Battlewagon to destroy Acheron itself. Macha was able to teleport Gorgutz and Angelos off the world before it was destroyed. 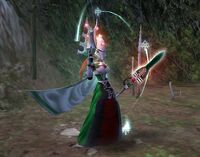 Farseer Macha of Biel-Tan during the conflict on Tartarus 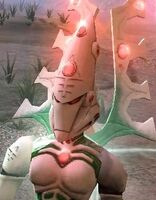 Farseer Macha of Craftworld Biel-Tan
Add a photo to this gallery
Retrieved from "https://warhammer40k.fandom.com/wiki/Macha?oldid=333949"
Community content is available under CC-BY-SA unless otherwise noted.