An MV5 Stealth Drone is a type of Tau Drone (small, disc-shaped, semi-sentient machine) employed in pairs alongside XV95 Ghostkeel Battlesuits. Stealth Drones consist of an advanced processor unit, which individually has only a basic intelligence (approximately equal to that of a small animal such as a pterasquirrel), and moves about by way of a compact anti-gravitic generator and much modified variant of Tau Jetpack. This allows the Drone to hover over the ground and skim over most obstacles.

The dome of an MV5 Stealth Drone is studded with stealth field generators which match those found on an XV95 Ghostkeel Battlesuit's armour, and it carries an underslung stealth emitter. This projects a stealth field over itself and its attending XV95 Ghostkeel. A pair of these overlapping fields can make both the Drones and the Battlesuit virtually invisible in open terrain. While some Drones are seen as expendable assets by the Tau, MV52 Stealth Drone pairs are invaluable to Ghostkeel Shas'vre, who often form an unnaturally strong bond with them while on extended missions behind enemy lines. 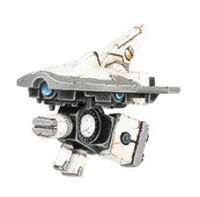 Dorsal and side views of an MV5 Stealth Drone; the markings on an MV5 Stealth Drone are the same as those on the XV95 Ghostkeel Battlesuit it accompanies
Add a photo to this gallery
Retrieved from "https://warhammer40k.fandom.com/wiki/MV5_Stealth_Drone?oldid=288754"
Community content is available under CC-BY-SA unless otherwise noted.