The Lord of Skulls is a super-heavy Daemon Engine of Chaos that is dedicated to the service of the Chaos God Khorne. These massive Daemon Engines are created by the most ambitious and skilled of Warpsmiths deep within their black forges located within the Eye of Terror.

Each Lord of Skulls is a grotesque battle construct armed with a multitude of powerful daemonic weapons. The Lord of Skulls takes the form of the upper body of a great warrior of Khorne, mounted upon a set of large tracks. These monstrous machines are powered by steam from the boiling blood of murderers, which swills forth from immense pressure tanks located on the daemon construct's back.

When the Lord of Skull's ire is raised to apoplectic levels, it vents great gouts of this fluid into the ranks of the enemy to boil them alive. The machine is festooned with the remains of its victims, their skulls forever trapped within the daemon machine's armour and weapons.

The Lord of Skulls appears similar in construction to the Chaos Lord of Battles, another massive Daemon Engine of Khorne, and it is also powered by a Greater Daemon of the Blood God.

Grinding across the battlefield on rumbling tracks, the Lord of Skulls towers over its terrified foes. The very ground cracks apart in its wake, yawning chasms gaping wide to vomit skulls and fire onto the battlefield. Given life by the raging spirit of a Bloodthirster bound within its hull, and powered by the boiling blood of murderers, this unholy engine of war is death to all who stand before it.

Its devastating guns reduce swathes of victims to ruin, drowning them in jets of red-hot gore or burying them under rains of gnashing skulls. As it ploughs through the enemy ranks, the Daemon Engine wields its roaring cleaver with a speed and skill that is horrifying in something so huge. Entire ranks of enemy warriors are swept away with a single swing, tanks and monstrous beasts swatted through the air like toys.

Even towering war engines such as Ork Stompas or Titans are made to look clumsy and sluggish as the Lord of Skulls hacks off their limbs and tears open their armoured torsos amid blossoms of dirty flame. Few warriors can face the Lord of Skulls and live, for it is a machine of absolute destruction.

Being the brazen vessels of Bloodthirsters, many Lords of Skulls are worshipped by the Khorne Daemonkin, and followed into battle as living altars of Khornate worship. Their track guards will be heaped with skulls and runic fetishes, offerings made by the warriors who charge to war in their shadow. Their every deed is met by howls of adulation from the blood-mad throng, the Daemonkin inspired to new heights of fanatical devotion by the Lord of Skulls' unstoppable rampage.

The Renegades of The Wrath pay especial heed to rumours of a Lord of Skulls rampaging across the material dimension, seeking it out and fighting in its wake, the better to see one of Khorne's masterpieces in action.

Most Warp entities rage against their incarceration in a Daemon Engine, but there are those few that see their cage as the perfect weapon. This is most common amongst Bloodthirsters of the eighth rank, some of whom see the Lord of Skulls as a suit of armour within which they may wage war on the denizens of realspace.

The Lord of Skulls is armed with three main weapons, two on its arms and a single, potent ranged weapon mounted within its torso. The war machine always carries a Great Cleaver of Khorne in its right hand and a long-range weapon mounted upon its left arm.

The arm-mounted weapon can be either an infantry-shredding Hades Gatling Gun or a Skull Hurler, an aptly named weapon that hurls burning skulls at the Lord of Skulls' foes.

The daemon machine's hull-mounted weapons can include either a Gorestorm Cannon, a Daemongore Cannon, or an Ichor Cannon.

The Ordo Malleus has not yet determined the technical specifications for this Daemon Engine. 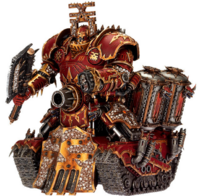 A Lord of Skulls armed with a Great Cleaver of Khorne, a Skull Hurler, and a Gorestorm Cannon 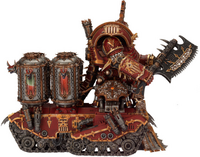 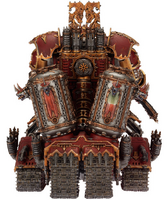 A Lord of Skulls, rear-view

A close up view of the Lord of Skulls' pressurised tanks of boiling blood, located on the daemon machine's back 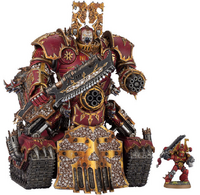 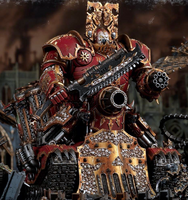 A Lord of Skulls moves across the battlefield