Lord General, also commonly known as Lord Castellan, Lord Marshal, and Captain-General, is the highest rank possible to achieve on the General Staff of the Astra Militarum. This rank of general officer actually has many different titles depending on the cultural context of the holder.

A Lord General usually commands an entire army group under the overall campaign or Imperial Crusade command of a Lord General Militant, but in fact the responsibilities of this rank can vary dramatically, depending upon the needs of the overall theatre commander.

On the lost Fortress World of Cadia, the rank of Lord Castellan was a special one granted in times of planetary emergency or military necessity. Cadia had always had two Planetary Governors, a Primus and a Secundus, so that if one was slain in an assault by the Archenemy, the other could continue to rule with no loss of continuity.

But if an emergency beckoned, a Lord Castellan was appointed whose powers included those of the Governor Primus as well as supreme command of all the Planetary Defence Forces and Astra Militarum troops present on the planet for life or until the crisis had passed. 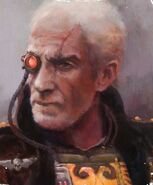