A Lord Discordant is a Chaos Space Marine who maintains sinister, arcane control over machines and the Warp-possessed constructs known as Daemon Engines.

A Lord Discordant's sinister, arcane mastery over machinery is similar to that of Warpsmiths in both their training and fell purpose. However, while Warpsmiths are generally found behind their mechanical charges, enacting repairs, Lords Discordant prefer to lead from the front, fighting from the backs of scuttling Daemon Engines known as Helstalkers.

Bellowing profane litanies that cause nearby machines to glitch and seize, they specialise at dismantling tanks, skimmers and the like with prying mechadendrites and brutal swings of their Impaler Chainglaives.

Lords Discordant feed off the suffering of the machines they destroy, using their captured motive force to repair their allied Daemon Engines and annihilate the enemy with coruscating beams of repurposed energy.

To Lords Discordant, showers of sparks and the flapping of loosed wiring are as pleasing as the jets of blood that gush from an open wound. These machine-obsessed Heretic Astartes scuttle across the battlefield atop Helstalker mounts, a palpable aura of anarchy exuding from their very being.

Upon sighting the enemy, they take stock of the war machines that have been brought to bear against them and plot their paths of destruction. A Lord Discordant is able to cut his way swiftly through the infantry on the front line, roasting them alive or riddling them with hails of shot, while his metallic steed crushes them to bloody paste beneath its blade-like limbs. But this rent flesh is merely an appetiser for the feast of suffering to come.

A Lord Discordant continues to spur his Helstalker onwards until he has reached the foe's tanks and towering combat walkers. As he charges, he bellows profane litanies in the Dark Tongue, a language that is vile and incomprehensible to mortal ears, and causes communications systems, Vox-grilles and Laud Jailers to crackle as though screaming in agony.

His mere presence short-circuits machinery not riddled with daemonic entities -- actuators and servos whir erratically, and targeting augurs cease to function. Once in range, the Lord's Helstalker pounces upon the nearest enemy vehicle, its massive forelimbs stabbing into the hull of its machine prey, piercing through ablative plating and tearing at gun turrets.

Some Helstalkers use Magma Cutters to slice open the vehicle they have pinned, while others have enormous hypo-armour syringes that -- after piercing the outer shell of their prey -- inject viral scrapcode and daemonic dataphages directly into the machine's circuitry.

The Lord Discordant himself lunges forwards with his Impaler Chainglaive, its whirring blade gouging into metal and exposing the vehicle's internal workings, while his mechatendrils rip at its panelling. He hears the machine's pain, he feels it struggle to reroute vital functions to maintain system integrity, and his Helstalker feeds on this suffering.

The Daemon Engine parasitically devours the motive force that powers its prey, be it a Machine Spirit (artificial intelligence) or some other esoteric datasentience employed in xenos technology.

As it does so, its own metallic frame swells with ingested code and subroutines, while rents in its casing crackle with Warp energy and seal closed. The Lord Discordant siphons off the pained spirit of the dying vehicle, his mechatendrils lapping up the spasmodic electrical discharges and corrupting their information signatures.

This harvested energy is then used to reinvigorate other Daemon Engines, or is released as a screaming beam to infect the systems of other enemy vehicles.

After their foe has been annihilated, Lords Discordant continue to prowl the battlefield, searching through the wreckage and piles of scrap for machinery in which some glimmer of motive force remains. When such vehicle remnants are found, their energy is swiftly cannibalised and corrupted.

Tzeentchian Lords Discordant cause vehicles to twist themselves through unseen folded dimensions, crumpling them into impossibly small heaps of slag.

The techno-imperatives crafted by Nurglesque Lords Discordant cause vehicles to vent internal gasses, while their outer plating sloughs off like a diseased scab.

Perhaps most disturbing are the Slaaneshi Lords Discordant, who are able to rewire machines to feel constant and excruciating pain. 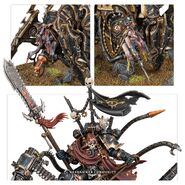 A detailed look at a Black Legion Lord Discordant, including his Helstalker and Impaler Chainglaive; at top, on the left, is a Magma Cutter-equipped Helstalker, while to the right is a Helstaker outfitted with a Techno-virus Injector 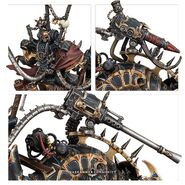 A detailed look at a Black Legion Lord Discordant's Helstalker-mounted weapons, including a Baleflamer (top) and an Autocannon (bottom)
Español
Community content is available under CC-BY-SA unless otherwise noted.
Advertisement