A Looted Leman Russ is an Imperial Guard Leman Russ Tank that has either been stolen or scavenged by Ork Lootas. The Orks have seen the usefulness of the Leman Russ and almost always loot one or more from a battlefield where they have faced the Imperial Guard should the chance arise. Orks will usually "enhance" their looted vehicles with more weapons, armour, and garish paint jobs which match their "unique" aesthetic style. However the Orks' incompetence with ranged weaponry has drastically decreased the effectiveness of the tank's main weapons. Looted Imperial vehicles are very popular with the Death Skulls Ork tribe who are very good at "liberating" such vehicles. The Death Skulls like to loot a vehicle, repair it, and then use it on the enemy during the same battle. Orks of the Blood Axes Ork tribe also enjoy looted vehicles and use them to infiltrate Imperial Guard positions. There is a Greenskin legend about a Loota called "Grabber" Gutzbag who could even loot Imperial Titans.

When an Imperial vehicle is scavenged off of the battlefield it is usually heavily damaged, but this is no challenge for Ork Mekboys. As seen with the Looted Rhino, the Mekboys will replace or "enhance" all of the weapons with better Orky ones. The Looted Leman Russ is usually equipped with a Boomgun as its main weapon and several Big Shootas as secondary weapons if its original weapons were unusable. The Looted Leman Russ can also be equipped with Skorchas, Boomguns, and Killkannons. These Looted vehicles can be upgraded with many Ork "enhancements" such as an 'ard case, a red paint job, Grot riggers, a Stikkbomb Chukka, extra armour plating, boarding planks, a wreckin' ball, a reinforced ram, or a Grabbin' Claw. Looted Leman Russ tanks can also be equipped with any still functioning weapons and features from when the tank was still in Imperial service, such as Battle Cannons, Demolisher Cannons, Heavy Bolters, Lascannons, Searchlights, Smoke Launchers, and track guards. 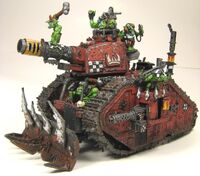 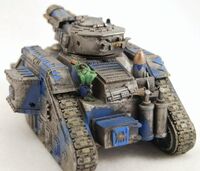 A looted Leman Russ Demolisher as seen from the rear; a Gretchin is used to load the cannon

A Looted Leman Russ Demolisher now in service to the Death Skulls Ork tribe
Add a photo to this gallery
Retrieved from "https://warhammer40k.fandom.com/wiki/Looted_Leman_Russ?oldid=302944"
Community content is available under CC-BY-SA unless otherwise noted.