The Lightning, also known as the Lightning Strike Fighter, is an air superiority fighter aircraft and ground attack craft used by the Imperial Navy for the purpose of quickly assaulting and defeating the enemy in aerial dogfights in order to establish air superiority over the battlefield. The Lightning is smaller and much more maneuverable than the heavier Imperial Thunderbolt fighter, and can be quickly scrambled during an enemy attack. The craft is capable of short take-off and landing (STOL) and vertical take-off and landing (VTOL), and when stationed on the ground, either at a permanent airbase or a forward operating base during a mission, the Lightning can use hydraulic ramps to get into the sky and into combat almost instantaneously. The Lightning is also capable of limited spaceflight in a vacuum and atmospheric reentry so that it can be launched from Imperial starships in orbit and unleashed anywhere air support is needed by Imperial forces during a planetary assault.

The Primaris-Lightning Strike Fighter was a relatively recent addition to the armouries of the Imperium's military forces during the latter years of the Great Crusade. The Primaris-Lightning Strike Fighter was a high-speed sub-orbital fighter craft designed for rapid interception, interdiction and surgical-strike roles. The Standard Template Construct (STC) design for the Lightning were found by Adeptus Mechanicus Explorator teams on the world of Karnak II after the Saint-Saen Crusade, which liberated twelve worlds in the Segmentum Obscurus. The database's design was transferred to the Forge World of Cypra Mundi, where the Lords of the Mechanicus consulted with the Emperor's Tarot and followed the advice of their oldest and wisest Tech-priests. The design was cross-referenced with the Mechanicus' vast archive on Mars before its rediscovery was determined to meet with the favour of the Machine God, and the manufacture of the Lightning began in earnest.

Created by the Archmagos-Arbiter Sykosk Thule, master of the sovereign Forge World of Voss, the Primaris-Lightning represented a new paradigm in aero-warcraft, being built around a powerful forced-plasma ramjet drive and optimised for the most sophisticated munitions and avionics systems available. While exceeding all similar patterns in service of its size for speed and payload capacity, it was extremely costly to produce, proved difficult to maintain and difficult to handle by all but the most experienced pilots -- flaws Sykosk attributed purely to the failure of weak flesh. These factors, however, saw the pattern's issue limited to elite close support units, such as the pilots of the Solar Auxilia, while a "degraded" -- if more easy to operate and maintain -- version of the Lightning was rumoured to be under consideration just prior to the outbreak of the Horus Heresy, although this reduced pattern played no part in the conflict.

After nearly half a millennium of trial and error, the Lightning saw its first official service with the Imperial Navy's Battlefleet Obscurus, and after all the engineering difficulties with reproducing the Lightning's advanced forward swept wing design were worked out the aircraft went into full production and was soon being supplied to all of the Imperial Navy's Carriers and Cruisers. The Lightning's STC data was eventually shared with the major Imperial naval centers of Bakka and Hydraphur, and now the Lightning is in service with the battlefleets of the Segmentum Tempestus and Segmentum Pacificus as well as the Segmentum Obscurus. Lightning production has recently begun within the Segmentum Solar, resulting in a new pattern of the aircraft known as the Voss Pattern Lightning Strike Fighter, which originated on the Forge World of Voss.

The basic armament of the Lightning is that of an air superiority fighter craft. It is armed with a single ventral-mounted, long-barrelled Autocannon, two wing-mounted Lascannons, and four wing-mounted Hellstrike Missiles. This weapons loadout, combined with the Lightning's superior speed and maneuverability, make it a fearsome fighter perfectly suited for aerial dogfights with other aircraft. The Lightning can replace its Hellstrike Missiles with Hellfury Missiles or the air-to-air Skystrike Missiles and it can also be adapted to carry bombs. The Lightning can be outfitted with an ejector seat, flare or chaff launchers, a more heavily armoured cockpit (at the cost of weapons and ammunition space), infrared targeting systems, and illumination flares.

A Lightning fighter as seen from the front 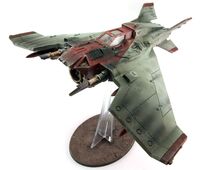 A Voss Pattern Lightning Strike Fighter of an unknown squadron, rear-right side view

A Voss Pattern Lightning Strike Fighter of an unknown squadron, rear view
Add a photo to this gallery
Retrieved from "https://warhammer40k.fandom.com/wiki/Lightning?oldid=295128"
Community content is available under CC-BY-SA unless otherwise noted.