"It was like the shadows just came alive and took him, right from under our noses. One moment he was there, the next he was gone... and none of us saw an Emperor-damned thing."

The Tyranid bioform known as the Lictor (Tyranicus chameleo) is a specialised evolutionary development of the Tyranid Warrior, highly adapted to a role as a scout in the vanguard of any Tyranid swarm's advance.

Lictors move ahead of the swarm, seeking out pockets of resistance to be eradicated and native life forms to be absorbed.

Able to move swiftly and without sound through even the densest terrain, and concealed by a chameleonic carapace that renders it all but invisible to the naked eye, a Lictor can remain hidden until it chooses to strike. It can wait motionless for days, unnoticed by its victims, an unseen herald of approaching disaster.

Lictors are the lone hunters of the Tyranid swarm, roving ahead of the hive fleet, seeking out prey and leading the Hive Mind to concentrations of enemies.

As tall as a Tyranid Warrior, Lictors are distinct in appearance from other Tyranid creatures in a number of ways, such as a pair of long mantis-like claws extending over the creature's shoulders which it can use for climbing and impaling its prey; long, drooping feeder tendrils that hang from its maw and greatly increase its senses, and shimmering chameleonic scales which allow it to hide with ease.

A natural predator, the Lictor is patient and stealthy and can move past even the most alert foes, or spend days hiding immobile, waiting for a chance to strike once its prey's guard is down. This behaviour has given the Lictor an almost mythical reputation amongst its foes, as a ghost-like horror which can strike at any time and place, before vanishing into thin air just as easily.

A Lictor's primary purpose is to lead the Tyranid swarm to fresh prey and seek out large groups of foes that might be hiding or fleeing before the swarm. In this role, they move silently and almost completely invisibly across all kinds of terrain, using their enhanced senses to find their foes.

These opportunistic hunters tend to avoid confrontations where they would be outmatched, silently stalking their prey from the shadows. Stalking Lictors also serve another deadly purpose than simple slaughter; exuding a potent pheromone trail which draws other Tyranid bioforms to the slaughter.

The larger the concentration of prey, the stronger the response and the more irresistible the lure. As scouts, Lictors are able to operate outside the Hive Mind's synaptic web, so they do not need to always remain close to a controlling Tyranid synapse creature.

When the time comes to strike, Lictors are brutally efficient, with a whole arsenal of bio-weaponry that includes mantis-like claws, talons that can pierce steel, barbed flesh hooks and feeder tentacles.

The feeder tentacles are tipped with sharpened bony plates that can pierce a victim's skull as easily as they can poke through eyeballs and sockets. They are used to lobotomise a victim so that the Lictor can swiftly devour its brain and absorb its memories in biochemical fashion.

Thus, in death, the enemy reveals more to a Lictor than it ever did in life, betraying the whereabouts of comrades and revealing any weaknesses that might be exploited.

The Lictor also gathers information for the Hive Mind. Part of the creature's unique genus means that it is capable of literally devouring a victim's memories by eating their brain, learning more from them in a single bloody meal than solar hours of brutal interrogation might yield.

Fighting Lictors is very difficult, as first a soldier needs to find one. Even then, bringing one to battle can be difficult as they strike and kill a handful of troops before vanishing, sometimes right before the eyes of their enemies, and leave no trail to follow.

Lictors are usually only brought down by quick-thinking heavy weapons teams or powerful Imperial heroes, such as well-armed Space Marines, who have the strength and nerve to slay the beast before it can melt away into the terrain.

Another less reliable method of destroying Lictors, and one favoured by many Astra Militarum commanders, is the reconnaissance by fire method. Once even the slightest evidence of a Lictor is detected, they will isolate the area they believe it to be lurking in (sometimes kilometres across) and carpet bomb it into ash and dust.

While this only rarely works (Lictors being cunning enough to either slip away or hide where least expected) it does raise morale among the local defenders, at least until the Lictor strikes again. 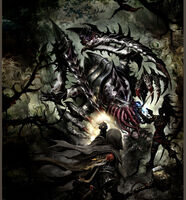 A Lictor leaps at an Explorator team.

A Lictor attacks a group of the Imperial Guard's Catachan Jungle Fighters. 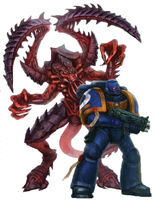 A Lictor prepares to attack an Ultramarines Space Marine. 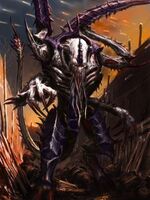