Created in limited numbers in the latter days of the Great Crusade of the late 30th Millennium, the Leviathan Pattern Siege Dreadnought or more simply, the Leviathan Dreadnought, was developed in secret on Terra, away from the pervasive oculars of the Mechanicum.

Its massive frame incorporates hybridised technologies, some dating back into the dim past of humanity. Towering over later Imperial combat walker patterns, this heavily armoured Dreadnought is savagely powerful.

It was designed for siege warfare and primarily armed with close combat and support weaponry that can rend buildings, vehicles and flesh alike; though it is no less effective when armed with the powerful and esoteric short-ranged weaponry uniquely developed for it.

The Leviathan's oversized Atomantic Reactor allows it to bear weapons more powerful than other classes of Dreadnought, and also powers reinforced energy fields that surpass those developed for the Contemptor Pattern Dreadnought.

Power has its cost though, and the systems of the Leviathan place a lethal level of strain on the minds of its occupants.

Space Marines who find themselves interred within a Leviathan will pay a heavy toll; either with their life, or their reason.

Those few examples of Relic Leviathan Dreadnoughts which survive into the late 41st Millennium are ancient and terrible relics, rarely spoken of and rarely deployed, dreaded as much as they are revered by those Chapters in whose armoury vaults they reside and stand empty until direst need.

The tormented and ravaged minds of those Astartes interred within are driven to the edge of madness by the little-understood mechanisms unique to the Leviathan, trapped in gore-soaked dreams of the lost Age of Darkness during the Horus Heresy which haunt the machines themselves, and soon suffer a final dissolution owing to the terrible strain the Leviathan inflicts on those who would dare to master it.

Only the full authority of a Master of the Chapter is sufficient to unleash these terrifying machines in war, as where they strike and what they kill is as often determined by their dark dreaming as it is the will of their commanders.

Developed in the highest secrecy not on Mars, but on Terra, the Leviathan was an alternative development of the highly successful Contemptor Dreadnought. It represents hybrid technologies, some of which it is believed date back to the Age of Strife, which rumours had it were created by the hand of the Emperor directly.

The resources required to produce one were immense, equal perhaps even to an Imperial Knight. Made available to the Legiones Astartes only in limited quantities before the outbreak of the Horus Heresy, they were highly valued and recognised as savagely powerful siege and hunter-killer units.

They placed an onerous and ultimately lethal strain upon their occupants, the Leviathan's incumbent burning brightly but briefly in their second life.

Many in the ancient Mechanicum were deeply uneasy over the design, seeing it as purpose-designed to match and indeed destroy the Mechanicum's own Battle-Automata in some future, unforeseen crisis or dispute between them and the wider Imperium.

During the Horus Heresy, Loyalists with access to Terra were able to obtain new Leviathan Dreadnoughts, although never many, while Traitors and isolated forces were reduced to marshalling their few Leviathans carefully or hunting down the relics of the dead from the battlefields to be re-commissioned.

A Relic Leviathan Pattern Dreadnought is armed and equipped with:

A Relic Leviathan Pattern Dreadnought may replace one or both of their Leviathan Siege Claws with built-in Meltaguns with any of these options:

During the Great Crusade and Horus Heresy the Leviathan Dreadnoughts of the Legiones Astartes featured different weapon loadout options than those relics still found during the 41st Millennium.

A Legion Leviathan Pattern Dreadnought is armed and equipped with:

A Legion Leviathan Pattern Dreadnought may replace one or both of their Leviathan Siege Claws with built-in Meltaguns with any of these options:

A Legion Leviathan Pattern Dreadnought may replace its torso-mounted Heavy Flamers with this option:

Legion Leviathan Pattern Dreadnoughts may also have a variety of equipment such as: 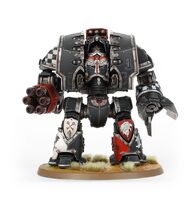 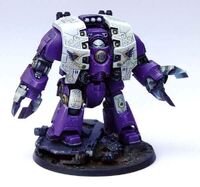 A Pre-Heresy Leviathan Pattern Siege Dreadnought of the Emperor's Children Legion with a pair of Leviathan Siege Claws. 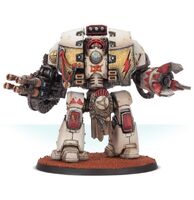 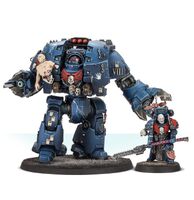 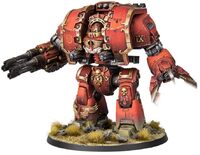 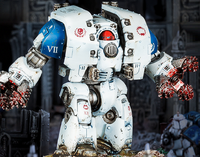 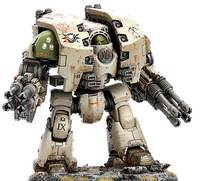 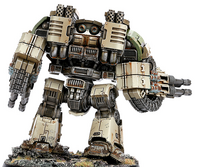 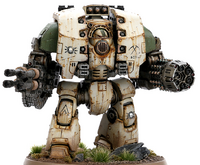 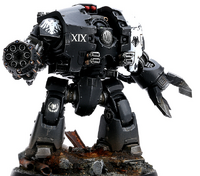 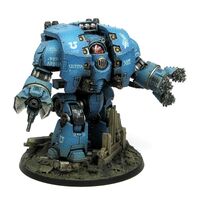 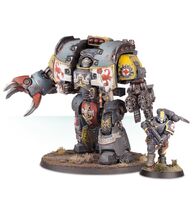 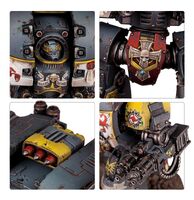 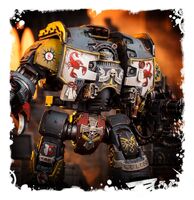 The Red Scorpions Relic Leviathan Dreadnought Carab Culln the Risen prepares to meet the foes of the Emperor in battle once more after his resurrection.

An ancient pict-capture of two Leviathan Pattern Siege Dreadnoughts of the Space Wolves Legion during the Battle of Prospero.
Español
Community content is available under CC-BY-SA unless otherwise noted.
Advertisement