The Imperial Leviathan is a super-heavy mobile command centre and assault transport that uses the same chassis as the massive Squat Colossus and Cyclops war-machines. The design of this monstrous vehicle was supplied to the Astra Militarum as part of the mutual exchange of materials and technologies between the Squat homeworlds and the Imperium.

The Imperium uses its Leviathans as gigantic mobile army group command centers for coordinating the vast numbers of men and vehicles found in Imperial Guard regiments. The Squats employed the Leviathan as a massive troop carrier to transport special "Ironbreaker" Brotherhoods of Squat warriors into combat protected by its four Titan-class Void Shields and metres-thick armoured walls. In essence, the Leviathan is a giant, land-based Battleship on treads.

Standing over 90 metres tall, the Leviathan has enough cargo room to hold over 2 full companies of Guardsmen and all their wargear. Each Leviathan contains extensive communication and surveillance equipment, including satellite uplink capabilities and mobile nanobots used for reconnaissance and espionage that allow an Astra Militarum Colonel and his command staff to coordinate the movements of an entire Astra Militarum regiment at the same time.

The Leviathan even features a rear deck landing pad for Imperial transport craft such as the Valkyrie and Aquila Lander. The vehicle is armed with a wide-variety of weaponry, including eight Battle Cannons and twelve sets of twin-linked Heavy Bolters.

The Leviathan's main weapon is an extremely powerful and massive ballistic Auto Weapon called a "Macrocannon," though it is also known as a "Doomsday Cannon." The Macrocannon is said to be big enough to fit a Leman Russ main battle tank inside of the barrel, and when fired its report is clearly audible from several Terran miles away, while the overpressure shockwave can be felt at similar distances. The Leviathan could be outfitted with Corvus Assault Ramps, turning the massive war machine into a siege tower, allowing its troops to climb onto the walls of enemy fortifications. 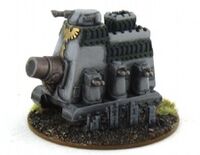 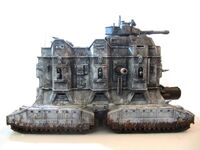