A Lernaean Terminator was a member of an elite formation of Astartes warriors used exclusively by the Alpha Legion Space Marine Legion during the Great Crusade and Horus Heresy eras in the 30th and 31st Millennia. Though the Alpha Legion maintained and fielded the entire spectrum of Legiones Astartes unit configurations, few knew of the Lernaean Terminator Squads. This was not because they sought to obscure their existence, but rather because they rarely left behind any witnesses of their deeds.

The Lernaeans were, like the mythical beast that was their namesake and the icon of their Legion, an unformed legend and the object of shrouded dread. They were the grinding jaws of the many-headed hydra, the furious assault from the unexpected quarter. And like the beast of myth, they were all but impossible to slay. Clad in Cataphractii Pattern Terminator Armour chased with baroque finery and armed with Volkite Chargers, they were fearsome close combat assault and vanguard spearhead units against which few enemies could stand.

In battle they advanced relentlessly upon the foe, descending with controlled fury and slaying any enemy driven to rout before them. Having secured their objective, they held it stubbornly against all counterattacks like a great beast with its jaws clamped firmly about its doomed prey. It is unknown if this formation still exists in the Alpha Legion of the 41st Millennium.

The specially designated elite formation known as the "Lernaean" was derived from ancient Terran myth by the Alpha Legion. This cognomen appeared to have been given to the XX Legion's most expert shock assault troops, particularly to dedicated Terminator companies and in some instances Legion Breacher Siege Squads and Dreadnoughts. In particular, battle recordings of certain Lernaean Terminator units marked them as being equipped with advanced teleportation assault capacity and specialised heavy weaponry such as compact Conversion Beam Weapons and phase-field generator gear.

The foremost task of the Lernaean was to swiftly isolate and destroy the most powerful frontline troops and potent battlefield assets a foe possessed, and to do so in such an emphatic and bloody manner that not only was a potential threat to the Alpha Legion's attack eroded, but the psychological shock of their attack would further damage enemy morale. Such was the calculated cruelty and cold brutality employed by the Lernaean Terminators that their reputation quickly spread beyond the Alpha Legion itself. 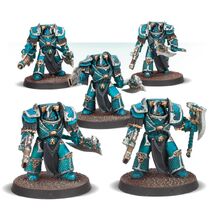 An Alpha Legion Lernaean Terminator Squad armed predominantly with Volkite Chargers and Power Axes; one of the warriors is armed with a Conversion Beamer and a Power Axe. 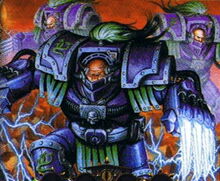 A trio of Lernaean Terminators unexpectedly teleport amidst the foe.
Add a photo to this gallery
Retrieved from "https://warhammer40k.fandom.com/wiki/Lernaean_Terminator?oldid=330762"
Community content is available under CC-BY-SA unless otherwise noted.