The Leman Russ Incinerator is a Leman Russ Tank variant rarely seen in the late 41st Millennium. During the Great Crusade and Horus Heresy eras of the 30th and early 31st Millennium, the Incinerator was one of the most powerful versions of the tank available to the regiments of the Imperial Army.

The elite cohorts of the Solar Auxilia in particular were known to field the Incinerator in large numbers as infantry support or to accompany armour-borne assault thrusts. The twin-linked Volkite Demi-Culverin with which the Incinerator was armed was a rare and highly prized weapon more commonly seen on the war machines of the Legiones Astartes, and they had to be painstakingly calibrated and intensively ministered to by Tech-priests assigned to the cohort to ensure their continued operation. This particular pattern pf the Leman Russ tank is almost unheard of in the armies of the late 41st Millennium, having been replaced by the more versatile Hellhound.

The Leman Russ main battle tank was first developed some time during the Great Crusade in the late 30th Millennium. The Leman Russ proved to be a reliable and proven armoured vehicle named after the Primarch of the Space Wolves Space Marine Legion in honour of his savage ferocity in war. Amongst the forces of the nascent Imperium that utilised the resilient and ubiquitous battle tank was the elite Solar Auxilia.

Numerous sub-patterns mounted a wide array of weapons in service of the elite armoured formations of the Solar Auxilia, and were often enhanced to the "Solar Pattern," fitted with supplementary survival and exploration systems. Leman Russ tanks in Solar Auxilia strike squadrons were fitted with extended fuel reserves and their engines enhanced with forced induction chargers. These combined to increase the tanks' speed and operational range substantially.

Leman Russ assault squadrons consisted of heavily armoured variants of the Solar Pattern -- re-configured for direct assault against fortified enemies. They lacked the speed of the Leman Russ strike squadrons but were formidably durable. Their main weapons were comparatively short-ranged in relation to the artillery batteries, but they were used in a direct assault role or in close support of the infantry Tercios. The rare Leman Russ Incinerator was one of the rarest and most devastating variants of Leman Russ battle tank accessible to the regiments of the Imperial Army during Mankind's conquest of the galaxy.

The Leman Russ Incinerator mounted a terrifying twin-linked Volkite Demi-Culverin, a powerful weapon from the Age of Technology that could tear through infantry squads with ease. Like all Volkite Weapons it produces a deflagrating attack, in which subsonic combustion caused by a beam of thermal energy is propagated through the target by thermodynamic heat transfer, so that hot burning material heats the next layer of cold substrate and ignites it. In this regard, the Incinerator's weapon-system only proved inferior to the mighty Volkite Carronade mounted on the Glaive Super-Heavy Special Weapons Tanks of the Legiones Astartes, but it still remained more then capable enough for burning entire squads of enemy infantry to ashes in a blink of an eye.

Due to its painstaking calibration-process and intensive need for maintenance, the Leman Russ Incinerator has progressively vanished, the technological know-how and expertise required to maintain its complicated and delicate weapon-system becoming ever rarer. In the armies of the late 41st Millennium, the role of the Leman Russ Incinerator has since been taken over by the more versatile Hellhound, and only a very few venerable Astra Militarum regiments will still maintain a few of these rare but vastly powerful relic machines.

The Adeptus Mechanicus has not made the technical specifications of the Leman Russ Incinerator publicly available. 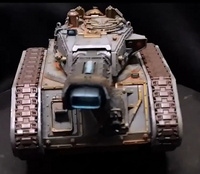 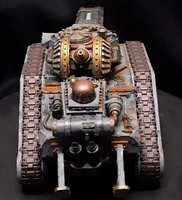 Leman Russ Incinerator (rear view)
Add a photo to this gallery
Retrieved from "https://warhammer40k.fandom.com/wiki/Leman_Russ_Incinerator?oldid=326980"
Community content is available under CC-BY-SA unless otherwise noted.