A Legion Outrider Squad was a specialised unit of the ancient Space Marine Legions that was employed during the Great Crusade and Horus Heresy eras in the late 30th and early 31st Millennia. These mechanised Space Marine reconnaissance squads took to the field mounted on all-terrain Assault Bikes and were responsible for performing scouting missions and conducting guerrilla attacks behind enemy lines. It was from these formations that the later Adeptus Astartes Bike Squads were created after the Second Founding in the early 31st Millennium.

Legion Outrider Squads were formed from experienced Space Marines expert in operating independently and often deep behind enemy lines. These specialised troops were the eyes and ears of their Legion in the field. They took to the field mounted upon ruggedly constructed, all-terrain armoured ground bikes and scramblers. These squads were utilised for scouting missions and hit-and-run attacks deep behind enemy lines, the chief advantage of the Outriders being their speed. Their Assault Bikes enabled them to cover ground far quicker than infantry and go where heavier vehicles could not. 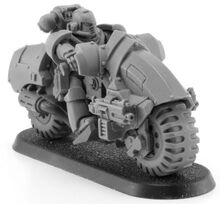 Legion Outrider - profile view, reversed
Add a photo to this gallery
Retrieved from "https://warhammer40k.fandom.com/wiki/Legion_Outrider_Squad?oldid=178368"
Community content is available under CC-BY-SA unless otherwise noted.