The Legion Medusa was a common variant of the standard Imperial Army Medusa Self-Propelled Siege-Mortar Tank that was used by the Space Marine Legions during the Great Crusade and Horus Heresy eras of the late 30th and early 31st Millennia. As cohesive fighting forces able to operate and conquer in any theatre of war, with or without support from the Imperial Army, the Space Marine Legions maintained their own mobile heavy artillery units. The long-range Legion Basilisk, Medusa Siege Mortar, and the Deimos Whirlwind were some of the most common artillery units used by the Legiones Astartes. These vehicles proved their effectiveness both for protracted bombardments and as a defensive weapons against enemy armoured vehicles. The Space Marine Legions made far less use of heavy artillery units such as the Medusa due in no small part to the fact that static warfare does not suit the character, strangths, or advantages of the Space Marines. However, those Legions who extensively practiced siege craft, most notably the Imperial Fists and Iron Warriors, had far more reliance and trust in the so-called "big guns." The Deimos Whirlwind was the most common type of artillery vehicle used in most of the Legions since it was lighter and built upon the Deimos Rhino chassis and therefore easier to repair and support in the field.

In the 41st Millennium the various Chapters of the Adeptus Astartes no longer make use of long-range artillery tanks. Instead they use the Whirlwind Multiple Missile Tank almost exclusively as their ranged artillery support vehicle. Although no records are known to exist as proof, it is possible that some Chapters still maintain a cache of Legion Basilisks in their armouries, waiting for the day that they may again be of use to the Astartes.

The Legion Medusa, like the standard Imperial Army Medusa Self-Propelled Siege-Mortar Tank, was armed with a single Medusa Siege Gun. The weapon fires a heavier shell than the Earthshaker Cannon used by the Legion Basilisk at a lower velocity over a much shorter distance. The heavy shell has excellent destructive capabilities, but the Medusa cannot match the Earthshaker for its longer range and so is less useful for harassing fire and counter-battery fire missions. Instead, it is primarily used to destroy enemy fortifications, such as bunkers, pillboxes, walls and trenches. The Legion Basilsik is also armed with a single hull-mounted Heavy Bolter that can be used to engage enemy infantry forces that get too close, but the Medusa could also lower its main cannon to fire upon closer targets, though this tactic was rarely employed. The siege weapon could fire several different types of shell, depending on what would be most effective against the target. The vehicle could be upgraded with a Dozer Blade, an Auxiliary Drive System, Extra Armour Plating, a Hunter-Killer Missile Launcher, a Pintle-mounted twin-linked Bolter, a Searchlight, and Smoke Launchers. The Legion Basilisk could replace its Pintle-mounted twin-linked Bolter with a Combi-Weapon, a Heavy Bolter, a Heavy Flamer, a Multi-Melta, or a Havoc Missile Launcher. If the vehicle was a part of a Legion Artillery Tank Squadron it could also serve as a command tank.

A Legion Medusa of the Word Bearers Legion, right-side view 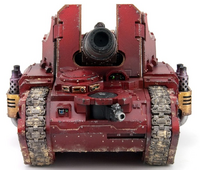 A Legion Medusa of the Word Bearers Legion, front view 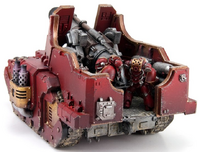 A Legion Medusa of the Word Bearers Legion, rear view 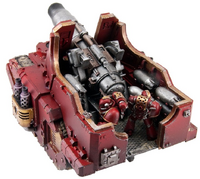 A Legion Medusa of the Word Bearers Legion, rear-deck view
Add a photo to this gallery
Retrieved from "https://warhammer40k.fandom.com/wiki/Legion_Medusa?oldid=301625"
Community content is available under CC-BY-SA unless otherwise noted.