A Legion Destroyer Squad was a special weapons formation of the ancient Space Marine Legions that saw action during the Unification Wars, the Great Crusade and Horus Heresy eras in the late 30th and early 31st Millennia.

Considered dishonourable by some of the Legions who made little use of them or eschewed their use altogether, the Destroyers were equipped with and expert in the use of otherwise proscribed and forbidden weaponry that made use of technology developed during the Age of Strife.

Though none could deny the effectiveness of such foul weapons of mass destruction, the Astartes who composed Destroyer cadres were often shunned by other Legionaries as being somehow morally or dishonourably tainted.

The origins of the Destroyer Squads lay in the conduct of the Unification Wars on Terra in the late 30th Millennium, but surprisingly not with the forces of the Emperor but with the armies of His enemies. Considered dishonourable by some Space Marine Legions who refused to their use outright, the Destroyers were equipped with and expert in the use of otherwise proscribed and forbidden weaponry, including certain weapons of mass destruction like chemical and tactical nuclear weapons.

Alongside certain factions of the Mechanicum, only Astartes Destroyer Squads were sanctioned to use such forbidden weapons within the forces of the Imperium by the Emperor's command. Radiation-based weapons, bio-alchemical munitions and the burning horror of Phospex were amongst the components that comprised the Destroyers' dark arsenal -- weapons which irrevocably tainted the ground on which they were used. During the long nightmare of the Age of Strife, such weapons of mass destruction rendered many once life-sustaining human colonies uninhabitable charnel houses.

Destroyers were marked by their fire-blackened and chem-scalded Power Armour. These Space Marines were often shunned and deemed somehow tainted by their fellow Battle-Brothers in many Legions. This was because Destroyers were considered only a necessary evil of the Great Crusade, although the effectiveness of their relic-weapons in wiping out particularly difficult foes could not be denied.

The drawbacks of using such deadly weaponry was the inevitable physical toll it took on a Legionary's body. Despite their genetically-enhanced Astartes physiology, Destroyer Squad Space Marines often displayed the physical affects of long-term use and proximity to such toxic weaponry, including: radiation-induced cellular degeneration, abnormally pale skin that displayed unhealthy lightning-storms of veins and blood-bruises staining the flesh, yellowed-jaundiced eyes, and aggressive and rare forms of cancer which often resulted in the replacement of the affected organs with augmetic replacements.

It is of note that the Death Guard Legion under their Primarch Mortarion quickly became associated with the use of alchemical and radiation weaponry to a greater extent than any other Legion, further darkening the Death Guard's reputation with their Battle-Brothers. Simply put, the use of toxic gas, crawl-burning Phosphex and contaminated rad-shells did not rankle their Legion's honour as it did for some, while Mortarion himself was a master of such weapons and student of the most horrific arts of war, and had no compunction in their use against any foe that threatened humanity.

Furthermore, the Death Guard's Astartes physiology, based on Mortarion's genome, were engineered to be even more resilient to toxic environments than the Space Marines of other Legions. This led the XIVth Legion to be more and more frequently deployed into battle in warzones where hellish and lethal conditions were present, and in which they would then excel.

This in turn resulted in a kind of self-fulfilling fate for the Death Guard, as they were ever more associated with the most nightmarish of wars and in them the use of the most terrible weapons. A timbre of horror and charnel taint seemed to adhere to the Death Guard then, long before the Horus Heresy was born, and they came to be to some extent shunned and suspected by their fellow Legions in a way the Dusk Raiders had never been.

A pair of Night Lords Legion Destroyer Squad members bearing the weapons of their trade. 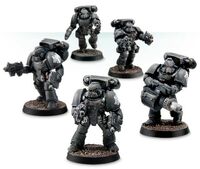 White Scars Legion Destroyer of the infamous Karaoghlanlar or the "Dark Sons of Death."

Ultramarines Legion, Legionary Kletos, 2nd Destroyer Company, 22nd Chapter. Note that the markings on the forearms are highly idiosyncratic and have only been observed in use amongst the Destroyer cadres of the Ultramarines, Emperor's Children and Raven Guard Legions. 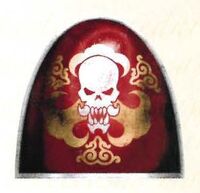 White Scars Armourial with Karaoghlanlar insignia associated with the Destroyer units of the V Legion. 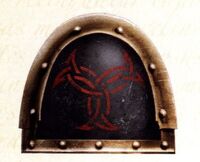 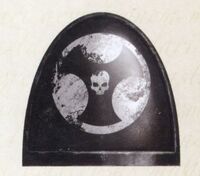 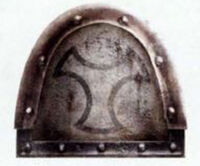 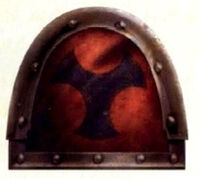 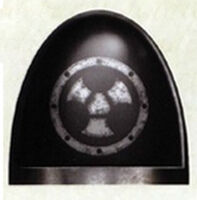