The Legio Vulpa ("Death Stalkers") is a Traitor Titan Legion of the Dark Mechanicum that repudiated its oaths to the Emperor of Mankind and followed the Warmaster Horus into the service of the Ruinous Powers during the Horus Heresy.

The Legio Vulpa was originally based on the Forge World of Anvillus. Its current location is unknown.

The Legio Vulpa's personnel valued the honour of close quarters battle, where they could see the eyes of their foes -- or in the case of Titan warfare their armoured heads -- and feel the concussive force as their weapons smashed into them.

The Legio Vulpa always had a reputation for excessive cruelty, and their fall to Chaos has only made them more deadly.

A killing fury is common to many Titan princeps, the thrill of a felled foe echoed by a raging Machine Spirit (artificial intelligence) and feeding back through the neural link of the Titan's MIU. Death Stalkers princeps often give into this battle madness, riding the wave of exhilaration and letting their attacks become almost instinctive.

The cognomen of "Death Stalkers" remains an aptly chosen honorific for the Legio Vulpa, for the ancient Titan Legion has an extensive reputation as expert hunters possessed of great savagery and cruelty. The founding of the Titan Legion was undertaken during the Age of Strife upon the Forge World of Anvillus shortly after its colonisation, motivated by the appearance of the Jindarii, a species of nomadic bio-mechanical hunters that had, centuries before Mankind's arrival to Anvillus, established a proving ground in the neighbouring sub-sectors. Records indicate that the Human colonisation of Anvillus galvanised the local Jindarii tribes into enacting frequent raids against the ancient Mechanicum enclave.

The conflict between the Jindarii and the Legio Vulpa did much to shape the ethos of the Titan Legion, for the xenos proved immensely cunning and highly adaptable. When faced with a threat far beyond the skill of their normal warriors, the Jindarii began a programme of experimentation and genetic manipulation, implanting the bodies of its most seasoned warriors into gene-wrought organic constructs that rivalled the strength and size of a god-engine. The archive of Anvillus, which maintained detailed records on the threat of the Jindarii, highlight that the initial Jindarii Titan analogues compensated for a distinct lack of ranged weaponry with stealth and speed at odds with their size.

With the advent of the Jindarii's new weapons, the conflict entered a new phase, resulting in seven solar decades of war, during which the military minds of the Legio Vulpa conceived and published the first edition of its Libraxus Tacticae Vulpa, the Titan Legion's battle bible. Heavily influenced by the hunting tactics of the Jindarii, the Legio Vulpa favoured tactical deployments that involved direct engagement with the foe, utilising bold assaults combined with misdirection and calculated manoeuvring to entrap enemies and slaughter them without mercy.

Thoughthe exact date of the war's conclusion is lost to time, the archives of Anvillus record the final battle between the Jindarii and the Legio Vulpa being fought on the moon of Yythe, located in the third closest star system to Anvillus. There, a demi-legio of 32 Legio Vulpa Titans achieved a decisive victory over the Grand Matriarch of the Hyzebaru tribe of the Jindarii; Legio Vulpa legends state the matriarch, who had led the Jindarii war effort against the Titan Legions for two solar decades, stood 43 metres tall and slew seven god-engines before being slain in turn.

Soon after, the Jindarii surrounding Anvillus withdrew in full, no doubt departing for richer, less troublesome hunting grounds. Their departure was marked by a two-kilometre line of Jindarii skulls left along one of Yythe's great rivers, each one engraved with a stanza that, translated, ended with the line, "Here our greatest blades rest, firm in belief they knew death's art, taught instead by those who stalk beneath its shroud." From that day forth, the Legio Vulpa bore the name of "Death Stalkers" with pride.

In the centuries following the great victory of the Legio Vulpa, the Titan Legion proved instrumental in the expansion of Anvillus' domain, increasing the Forge World's holdings to include dozens of worlds including the Knight Worlds of Niagmarr and Slestra and the ore-rich world of the Anvil Reach. The wide dominion controlled by the magi of Anvillus proved a valuable asset to the Great Crusade upon contact between the Imperium and the far-flung Mechanicum fragment. Though negotiations began tersely, an agreement was achieved with little discord, treaties ensuring Anvillus retained the worlds it laid claim to.

In concordance with the agreed upon pacts, the principal strength of the Legio Vulpa was deployed to the forefront of the Great Crusade while Anvillus became a crucial part of the crusade's supply chain, with tithe records showing that the Forge World and its holdings produced nearly one-fifth of all materiel supplied to expeditionary fleets deployed within the Ultima Segmentum.

Rated as a Primus-grade Titan Legion, the strength of the Legio Vulpa was readily welcomed amongst the hard-pressed expeditionary fleets expanding the boundaries of the Imperium in the galactic east. Such sentiments soon gave way to concerns about the practices of the Titan Legion and the aggressive mien of its princeps, who were vocal in their desire to crush any deemed too weak to survive. Numerous acts of callous cruelty are attributed to the Legio Vulpa during their time serving in the Great Crusade with perhaps the most infamous example occurring during the Imperial Compliance action on the world of Dendritica -- in service alongside the Legio Solaria, the Death Stalkers refused offers of negotiation while besieging the city of Biphex.

Instead, the Legio Vulpa fell upon the city despite the objections of their fellow Titan Legion, burning it to the ground and slaughtering its inhabitants as they fled. In doing so, the Death Stalkers earnt the undying enmity of the Legio Solaria. Clashes with other Titan Legions proved a common recurrence for the Legio Vulpa; on Mars, the Death Stalkers seeking to expand the honorary holdings they had been gifted by the fabricator-general by encroaching on the forge-fane of the Legio Honorum.

Shadowed by a grim reputation for cruelty the bellicose and savage Legio Vulpa were easily subverted by the Dark Mechanicum, willingly turning against the Emperor. Indeed, the Death Stalkers proved eager to hunt their fellow Titan Legions, its princeps frequently sporting trophies claimed from fallen Titans upon the carapace of their own god-engines.

While the Legio Vulpa wholly committed itself to the cause of the Warmaster Horus, the Forge World of Anvillus fell into civil war, cutting off the Death Stalkers from their ancestral home. Few sightings of the Legio Vulpa Titans were recorded within the boundaries of the Anvillus Forge Empire during the Horus Heresy, suggesting a distinct lack of interest in the domestic affairs within the Titan Legion's ranks. Indeed, the savagery of the Legio Vulpa grew more debased during the conflict, its princeps becoming consumed by bloodlust and a thirst for battle.

Innumerable war zones suffered the predations of the Death Stalkers, its number becoming increasingly scattered as it carved a bloody path across the galaxy.

When the Schism of Mars erupted, the Traitors of the Dark Mechanicum sent the Legio Vulpa to eliminate their rivals the Legio Honorum, who had remained loyal to the man they believed to be the Omnissiah.

The Traitor Legio launched a devastating surprise assault upon the Death Bolts' Legio fortress in which the Loyalists lost 19 of their Titans, though the Legio Honorum managed to ultimately escape destruction and survive to fight on in the Emperor's name.

As the Horus Heresy progressed, the personnel of the Legio Vulpa hearkened to the teachings of the Word Bearers Dark Apostle Vorrjuk Kraal, and ultimately dedicated themselves to the worship of the Blood God Khorne, whose savage theology most closely matched their own aggressive tendencies and desires for close-ranged melee combat between god-engines. Blood sacrifices and dark rituals soon became commonplace among the Death Stalkers.

Imperial Divisio Militaris records, detailing the strength of the Legio Vulpa following the incorporation of Anvillus into the Imperium, rate the Death Stalkers as maintaining a strength of 154 god-engines, making it a Primus (Minoris)-grade Legio.

The principal strength of the Legio Vulpa was invested in Reaver and Warlord-class Battle Titans, supported by numerous examples of esoteric Titans, including several Nemesis-class Titans and at least two examples of Imperator-class designs.

Despite the notable hunting ethos of the Legio Vulpa, the Titan Legion made use of only minimal numbers of Warhound Titans, preferring hard-hitting direct methods of war to hit-and-run tactics. Commonly, Death Stalker god-engines would wield close-ranged Titan-grade weaponry such as turbo-lasers, chainfists and Arioch power claws, its preference for such Titan-grade melee armaments increasing during the course of the Horus Heresy as the hold of the Blood God increased upon the Legio's princeps.

The god-engines of the Legio Vulpa march in rust red and purple with bone trim.

As the Horus Heresy drew the Death Stalkers deeper into the blood madness of Khorne, their Titans were often coated in the rust red remains of their murderous exploits.

The heraldry of the Legio Vulpa is dominated by the Vorpus Sabrefang, its skeletal frame clad in armour. The Libraxus Tacticae Vulpa, the battle bible of the Death Stalkers, often references this ancient extinct beast as the epitome of the hunter's virtues -- cunning in its pursuit and savage when it strikes. Its prominence within the iconography of the Legio Vulpa lies in the important role it played in cementing the Death Stalker' demeanour following victory over the Jindarii.

The Sabrefang itself was not in fact native to Anvillus but rather the nearby moon of Yythe, recorded as once possessing a humid climate and numerous jungles in which Sabrefangs made their lairs.

Recognised as the final battleground of the war between the Forge Empire of Anvillus and the alien Jindarii cadres, Yythe was later established as a protected hunting ground for the Legio Vulpa. An early practice of the Legio Vulpa involved prospective princeps hunting down a Sabrefang to one of two ends; slaying the beast and returning with its pelt or capturing it alive. In all instances, the princeps would complete their task on foot, denied all but the most rudimentary of tools and required to scavenge from tech-caches deposited on the moon.

Less than half of those that took up the task would return victorious and of those only a rare few would return with a living beast -- those who did so quickly rose in prominence amongst the Titan Legion.

By the time of the Great Crusade, the Vorpus Sabrefang had long been extinct, no doubt as a consequence of overhunting. Nevertheless, the elite of the Legio's princeps seniores were known to keep facsimile versions of the Sabrefang as pets, creations of bio-manipulation and cybernetic-crafting that prowled around the princeps' feet or coiled around the base of their command throne.

So pervasive is the iconography of the Sabrefang among the Death Stalkers that its skulls are incorporated into the signum mobilis or banner of its maniples and used as decorations on the edges of its heraldry and even armour plating. 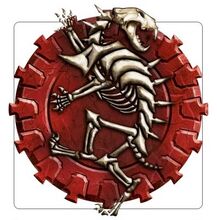 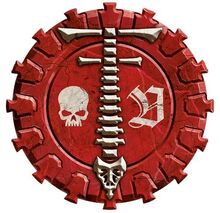 A Legio Vulpa Titan badge that depicts the stylised letter "T" of the Adeptus Titanicus as well as the letter "V," which represents the Legio Vulpa. 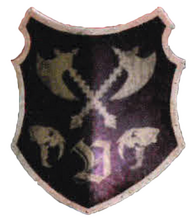 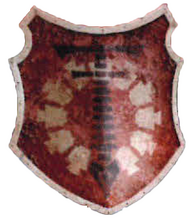 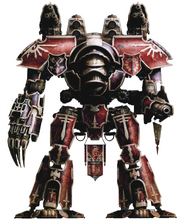 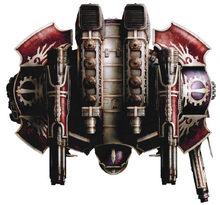 The Legio Vulpa Warlord-class Titan Iconoclast and its heraldry as seen from above. 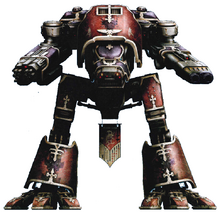