No apparent uniform colour scheme (Post-Heresy)
Black, Teal and Yellow Trim (Pre-Heresy)
The Legio Vulcanum I ("Dark Fire") is a Traitor Titan Legion of the Dark Mechanicum that repudiated its oaths to the Emperor of Mankind and followed the Warmaster Horus into the service of the Ruinous Powers during the Horus Heresy.

There is very little information in Imperial records about this Titan Legion's founding, though it is believed that it was founded before the Age of the Imperium during the Age of Strife.

The Legio Vulcanum I, alongside the Legio Vulcanum II, the "Lords of Ruin," hailed from within the Vulcanis System upon the Forge World of Stygies VIII in the Ultima Segmentum, a large moon orbiting a massive ringed gas giant on the outer fringes of the star system.

These two Legios once stood sentinel near the tear in reality known as the Eye of Terror, guarding against invaders from the galactic north.

But when the Warmaster turned upon the Emperor, the majority of both of the Forge World's Titan Legions were fighting at Horus' side in the Great Crusade, and they quickly swore their allegiance to him, following the Archt-traitor into damnation.

Located close to the ruinous hole in reality known as the Eye of Terror, the Legios stood watch against invaders from the galactic north. While unusual for a single star system to support two full Titan Legions, it is far from unknown, as Mars itself supports three.

Stygies VIII was granted two Legios due to its close proximity to the Eye of Terror and the attendant risks of Chaos attack on this important Forge World.

Most of the twin Legios' war engines were on crusade with the Warmaster Horus when the Horus Heresy began. In a series of bloody surprise attacks, a core of Chaos Cultists back on Stygies VIII seized control of the Forge World's manufactorum facilities.

Reduced to a small group of Loyalist Tech-priests, these valiant defenders protected the planet's Temple of Knowledge against the robed cultists and the hastily-improvised berserker machines that they had produced.

Trapped and on their own, the Loyalists expected that death would eventually follow, but unanticipated liberation came on the thirty-first day of the siege in the form of the graceful Aeldari Titans and hundreds of Jetbike-mounted warriors of the Saim-Hann Craftworld who smashed the servants of Chaos.

They had not come to help the Mon-keigh, but to deny to the forces of Chaos such a strategically potent manufacturing world so close to the Eye of Terror.

When the Horus Heresy finally ended, both of the Traitor Titan Legions of Stygies VIII fled into exile within the Eye of Terror. The planet is now home to a third Titan Legion, the Legio Honorum, which was brought to restore the Forge World's honour in the eyes of the Emperor.

The Dark Fire and the Lords of Ruin Legios had a long history of competition with each other. This was fuelled by the shared genetic ancestry of their princeps, who were created using ancient cloning techniques, and saw in their brothers and sisters dark reflections of themselves.

Following their fall to Chaos, corrupted clone crews linked a Legio Vulcanum maniple together in a disturbing way mere technology could not, and each Titan that fell in battle was keenly felt by its brothers and sisters.

So interlinked were the two Legios that their command structure blended together, and in battle, princeps seniores could share tactical information and guide each other's battlegroup without fear of becoming subsumed by another Titan Legion.

Before their fall to Chaos, the Legio Vulcanum I primarily coloured their Titans in black and teal, trimmed in yellowish brass trim.

After their corruption, and time spent in the Warp over several millennia, the Titans of the Legio Vulcanum I seem to no longer follow any single colour scheme.

Some Titans of the Legio bear olive green colours with details in yellow and black, while others have graphite hulls with golden lining.

Some war engines of the Legio, particularly those bearing the Mark of Khorne, have a red colour scheme.

The Legio Vulcanum's badge reflects the dual nature of the Legio itself.

On the right side, the symbol represents the Legio Vulcanum II (Lords of Ruin), consisting of a pair of black skulls, facing away from one another, centered upon a white circlet. The overall symbol is centered upon a field of teal.

To differentiate themselves from the counterparts in the Lords of Ruin, Titans of the Dark Fire will often utilise a simplified form of their main symbol upon a livery shield affixed to their god-engine's hull.

This symbol consists of a black burning brazier, centred within a white circlet. This central symbol is centred upon a black triangle, representing a mountain, which is surrounded by gold coloured laurels.

The overall symbol is centered upon a field of teal. 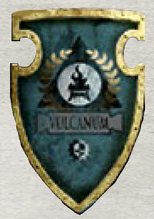 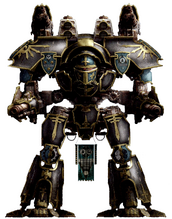 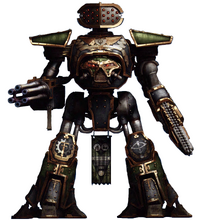 Pre-Heresy colour scheme of the Legio Vulcanum as displayed by the Reaver-class Titan Encroaching Fury. 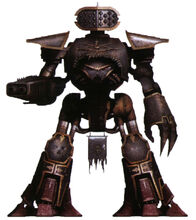 Chaos Reaver-class Titan Night Maw of the Legio Vulcanum I 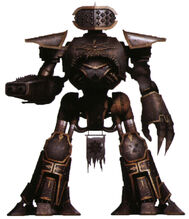 Chaos Reaver-class Titan World Burner of the Legio Vulcanum I 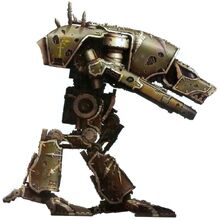 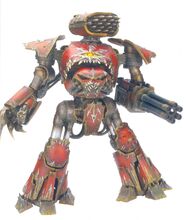 The Mori Incunabula, a Reaver-class Titan of the Legio Vulcanum I, possibly belonging to the first of these brother Legios.
Español
Community content is available under CC-BY-SA unless otherwise noted.
Advertisement