"For the alien, nothing!"

The Legio Victorum ("Foe Slayers") was a Loyalist Titan Legion of the Collegia Titanica, one of the military arms of the Adeptus Mechanicus. There is very little information in Imperial records about this Titan Legion's founding, though it is known that it was founded during the Age of the Imperium, in the days of the Great Crusade.

When the Schism of Mars occurred during the opening days of the Horus Heresy, the first Titans of the Legio Victorum were still present on Mars awaiting transport to other war zones within the Great Crusade when the civil war erupted between the Loyalist Mechanicum and the Traitor Fabricator-General's Dark Mechanicum forces. The Legio Victorum fought valiantly on the Red Planet until it was relieved by Imperial forces after Horus' defeat in the Siege of Terra.

Nothing else appears in the historical records concerning this Titan Legion until ten millennia later. When the dire threat of the Tyranid Hive Fleet Kraken threatened the Ultima Segmentum in 992.M41, the Legion's home Forge World of Triplex Phall came under the Great Devourer's shadow. The Legio Victorum survived the onslaught of the Kraken, though it cost was undoubtedly high, as they would later take part in the Third War for Armageddon in 998.M41.

The Legio Victorum has never wavered in its devotion to the Emperor. It revered Him as the Omnissiah, the Machine God incarnate, and as such considers him embodied in the dominating presence of each Titan. The Foe Slayers Legion crewmen, through their indoctrination to the Legion, all have one thing in common -- the belief that Mankind has the sole right of existence in the galaxy.

The fighting men of the Legion do not tolerate the alien in any shape or form. Their dedication to this goal of eradication has extinguished many races that the Adeptus Terra originally designated as harmless and has left more powerful alien races, such as the Eldar, extremely wary of the Legion's presence in any theatre of war.

The Titans of the Legio Victorum are renowned for their blitz tactics that are capable of shattering armies of a much greater size. In battle, their Princeps are adept at working with other Imperial units and coordinating attacks to cause the maximum amount of damage in the shortest possible time.

Typically, the Legion's Titans are armed for medium to long-ranged combat with devastating weapons batteries and super-heavy weapons predominantly featured, though a few Princeps have dedicated themselves to assault, arming their Titans with a variety of close combat weapons that very few enemy war machines can withstand.

The Legio Victorum was first formed on Mars when its first Titan, the Primus Malachi, was forged. The Legion was created with the intention of being sent to join Battlegroup Zara on an Imperial Crusade to the alien-infested galactic core. This never came to be, as the Foe Slayers found themselves embroiled in the civil war that spread over the Red Planet, the Schism of Mars, which occurred when the Warmaster Horus betrayed the Emperor during the grim days of the Horus Heresy

The newly born Titan Legion fought fiercely during the Schism for the forge cities that had created it, although there was only eight Titans in the Legion and it was hard-pressed by the Traitors. The Legion was not able to find transports to ferry it to Terra, and thus was prevented from taking part in the defence of the Imperial Palace. Instead, they continued to fight the Heretics on Mars, which remained under constant assault by the Traitors for the duration of the Heresy.

At the height of this conflict, the Legio Victorum found itself assailed by three entire Traitor Titan Legions that had nearly obliterated the Foe Slayers' remaining allies. Though the Legio 's Titans were battered by the Traitor war-engines, the Tech-priests laboured incessantly to repair any and all damage the god-machines under their care had sustained, and the Titan crews seldom left their mounts, resting within their cockpits only when the machines returned to the forges to be repaired by the Tech-priests.

The turning point of this uneven struggle came with the creation of the Imperious Cathedra, an Imperator-class Titan, one of the few which the Loyalists had managed to forge during the fighting. The Imperious Cathedra possessed the firepower of an entire battlegroup of smaller Titans, and enabled the Legio Victorum to fight the rebels on Mars until the Warmaster's defeat drove his forces from the Sol System.

After the Heresy, the Legion was taken to Triplex Phall, a Forge World located in the Eastern Fringes in the Ultima Segmentum, which would become its new homeworld. From there, the Legio Victorum started to amass an enviable Roll of Honour as its ranks swelled with newly constructed Titans. Though the Legion has had losses in its ten thousand year history, it is a matter of some pride that the oldest of its Titans, the Primus Malachi, is still fighting against the enemies of the Machine God.

The Legio Victorum's colours are blue with gold, bronze, and yellow details. The hulls of the Titans are dark blue and lined with gold, while the weapon extremities are bright yellow, or in the case of older Titans, bronze.

The Legio Victorum 's badge is a clenched golden-armoured fist, with a scroll below the central symbol that reads Victorum. Below the scroll is the half black/white skull symbol of the Adeptus Mechanicus centered on top of two criss-crossed lightning bolts.

Imperial Armour Volume One lists the Legio Victorum 's home Forge World as being Triplex Phall, located in the Segmentum Ultima, although older publications describe it as being Galatia in the Segmentum Pacificus, as well as providing a moderately detailed overview of the world. It is unknown if the information pertaining to Galatia has any relevance in regards to Triplex Phall, or whether another Titan Legion now calls Galatia home. 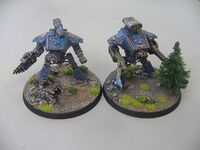