"What is the point of crushing something that is ugly and base; far better to crush the greatest cities, smash the finest art and tear down the most glorious empires ever wrought by the hand of Mankind."

Age of Strife, in service to the Martian Mechanicum

The Legio Suturvora, or as it later became more commonly and widely known during the latter stages of the Great Crusade, the Legio Infernus ("Fire Masters"), is a Traitor Titan Legion of the Dark Mechanicum that repudiated its members' oaths to the Emperor of Mankind and followed the Warmaster Horus into the service of the Ruinous Powers of Chaos during the Horus Heresy.

The Fire Masters were an active and much renowned Titan Legion with an enviable record at the forefront of the wars to reclaim the galaxy for Humanity.

Its first loyalty, however, was always to the overlords of Mars, a home from which it had been all but exiled since the first days of the Emperor's wars of conquest and liberation.

So it was that when the Horus Heresy came and Kelbor-Hal, Fabricator-General of Mars, threw in his lot with the Arch-traitor Horus, the Legio did not hesitate in joining the Warmaster's cause alongside their lord.

It would be a fateful decision that would see them wielded as a weapon against their erstwhile comrades at the Battle of Calth when the Word Bearers Legion struck their blow against Primarch Roboute Guilliman' Ultramarines Legion and its allies, and it would cost the Legio Suturvora dearly.

Caught up as a pawn in a war of powers they could not comprehend or control, the Legio Suturvora would suffer dire injury and loss which would wound them for the rest of the war, and see them eventually turn even on their own Traitor kin before the Heresy came to an end, never to see the red sands of their birth world again.

At the conclusion of the Heresy, the Fire Masters, along with the Traitor Legions, were driven towards the Eye of Terror along with the rest of the forces of Chaos.

Their current whereabouts are unknown, though they did participate in the 13th Black Crusade in 999.M41, providing support to the servants of Chaos engaged in combat on the Fortress World of Cadia.

The Legio Suturvora owed its genesis to the legend-haunted and little-understood histories of Mars in the early centuries of the Age of Strife, when the Mechanicum itself first came into being as it is now understood.

Its foundation is attested to have been as part of the so-called "Era of Pathogenesis" when the earliest generation of three Martian Titan Legions, known as the Triad Ferrum Morgulus, were used as the template and seed for a second generation of Titan Legions, of which the Legio Suturova was one. The particular pattern for the creation of the Legio Suturvora was the bellicose and powerful Legio Ignatum.

The main purposes of these new Titan Legions, which effectively doubled the number of divisions of the Collegia Titanica, were to complete the domination of Mars by the ancient Mechanicum and crush the remaining holds of the cabalistic Cy-carnivora Mekwrights and their own gargantuan hunger-engines who stood rival to the Cult Mechanicus, and to pacify the remaining reaches of the Martian rad-wastes and wilderness.

To this end, the early Legio Suturvora was given for its first forge city the shattered temple-foundry of one such fallen enemy cult in the hollowed-out mountain of Mons Sutura, south of the Sea of Iron Curses, one of the most desolate and troubled regions of the red world near to Mars' northern polar wastes. It was from this lonely peak that the new Titan Legion took its name.

For centuries the Legio Suturvora stood its watch and destroyed such ancient threats that from time to time plagued its domain, risen up from the ancient spoil-slag drifts and unearthed in the deep caverns by prying magi prospecting for the lore of the ancients from the Age of Technology.

It was a task it fulfilled unflinchingly -- if not a little thanklessly as the politicking and power-mongering of the Mechanicum magi and cult factions which ruled Mars largely passed the isolated Titan Legion by.

Without significant political patronage of its own, it relied on the grace and favour of the distant Fabricator-General of the Mechanicum, the ultimate overlord of Mars, for its supply and writ of what it began to deem its Omnissiah-given duty.

Its isolation and singular duty over time made the culture of the Legion a stoic, militantly religious and doctrinally reactionary one, and the various princeps of the Legio Suturvora became famed as hardened traditionalists who saw some of their fellow Titan Legions as worldly, irreligious and overly ambitious for their own honour and glory. In return, many of their fellow Titan Legions saw them as prideful, backward and unstable.

When it was decreed that Mars would be united with Terra under the power of the Emperor, as part of the various accords and treaties that made this possible, the might of the Titan Legions was to be given up to the Great Crusade as part of this alliance.

In the case of the majority of the Titan Legions of Mars, this was to be a matter of service rather than absorption, and the domains on Mars to which they were tied were to remain.

But as part of this pact of iron, the Legio Suturvora, along with the Legio Tenerii, were ordered to quit Mars and be released to the Great Crusade in perpetuity until its work of the liberation of humanity was complete.

The Princeps of Suturvora took this exile with their customary stoicism and fervour, convinced by the arithmetic auguries of their Tech-priests that it was the Omnissiah's will. In their passing, their fane, now little more now than a cenotaph to past duty, was sealed in darkness.

Fighting at the forefront of the Great Crusade, the Legio Suturvora rapidly began to attain a respect and rank it had never possessed on Mars. Fighting alongside the Ist Legion (Dark Angels) and the Emperor Himself in the campaigns of the Ceti-Lacaille Scourging, such was the honour they gained for the Mechanicum by their actions that their losses were replaced and original strength more than exceeded by freshly-constructed Titans at the Fabricator-General's own order.

In the decades that followed, the mendicant Titan Legion, based entirely upon a series of barques and transport ships, fought alongside more than half of the different Legiones Astartes at one time or another, trampling countless cities under their iron tread and laying waste to whole worlds in the Great Crusade's name.

It was for this latter record they began to become known to the common warriors of the Imperialis Auxilia as the "masters of fire" for their scorched earth tactics and the icon of the eternal flame which they had carried since their earliest days.

It was a name the Legio began to carry as a badge of honour, an identity for which it was respected and a fame it was honoured to own. In response, liveried flames began to appear in their heraldry, and demonstrably the number of Inferno Cannons their Battle Titans commonly employed as a preferred close-quarter weapon began to increase, further augmenting their reputation.

But it was to distant Mars, now no more than a memory to the Legion, that their loyalty remained, becoming a fanaticism that only seemed to increase with distance and time.

Amongst its princeps, moderati and attached Tech-priests, hubris as to their calling and position grew, as did their intolerance for those not of the Machine Cult's faith, while their excesses of destruction carried out on the battlefield became more marked.

By the time Horus had been elevated to the rank of Warmaster, within certain circles of the Great Crusade's high command voices were raised at the wanton and wholesale incineration of cities that could have been conquered and kept for the Imperium by the Legio, which had now started to refer to itself, at least informally, not as the Legio Suturvora -- a name many of its younger princeps viewed as nothing more than a relic of a distant and inglorious past -- but instead as the Legio Infernus; the burners of worlds.

When the Traitors' plans were laid for the death-strokes against former brothers that would begin the Horus Heresy in earnest, at Kelbor-Hal's urgings, the Legio Suturvora had already enthusiastically joined their master's cause.

The Legion's first act in the Traitors' service was to strike down their former comrades of the Legio Praesagius at the muster at Calth, a gathering of force which the machinations of Horus all too easily arranged for the Legio's presence at.

The death-struggle that was to follow for the Legio during the wider Battle of Calth itself became known as the Battle for Ithraca after the Calthian city where they were deployed.

As that battlefield became subject to the influence of the maddening shadow of the Warp, the Legio Suturvora was to succumb to a mindless barbarity it had never known, even in its worst excesses.

The price for this descent into the maelstrom was to be near-crippling losses and a retreat from Calth's surface with less than half of its forces intact. Disabused and enraged, the Legio's survivors had nevertheless chained themselves to the Traitors' cause and there was now no going back.

Worse still, their losses made them even more dependent on the favour of new masters so far as they were from Mars. The seeds of bitterness and hatred against the Imperium had been yet further sown.

The early Imperium's Divisio Militaris records extant for the latter years of the Great Crusade rated the Legio Suturvora as a fully operational Titan Legion of the second or Secundus-grade, with an estimated 100-130 god-engines in active service at the outbreak of the Heresy.

The principal strength of the Fire Masters lay in a core of Mars and Lucius Pattern Warlord Titans around 70 strong, and crews of veteran calibre with particular expertise in urban warfare.

Expanding on this core, the Legion also fielded a sizable force of Warhound Scout Titans to serve as its outriders and reconnaissance units, and it relied on a detachment comprised of at least eight Nemesis-class fire-support Battle Titans and two Imperator Titans as its most powerful strategic reserve in heavy engagements.

Medium-class Battle Titans, such as the Reaver, were in the minority in the Legion, and were almost invariably its most ancient god-engines, dating back to its days on Mars before the Great Crusade.

Although originally largely impoverished in terms of battlefield support units, the Legio Suturvora was further augmented as the Great Crusade progressed, with several dedicated regiments of mechanised Skitarii and two sub-covenants of the Legio Cybernetica indentured to its service.

These support forces, however, also suffered severely during the disastrous battle at Ithraca on Calth, the survivors being amalgamated into a single composite force which became known as the Fraxanii or "Burned Ones."

The colours of the Legio Suturvora Titan Legion is sable outlined in brass, as well as some white, and fringed with flame iconography in homage to their cognomen.

The iconography of the Fire Masters Legion is a white hexagon-outline with a sable coloured trident in its centre, and an orange flame burning from it, on a field of sable, framed with orange coloured flame iconography.

A Legio Suturvora kill banner of the Reaver Battle Titan Calvara, marking the kills claimed by its Gatling Blaster which was controlled by Moderatus Kerner. 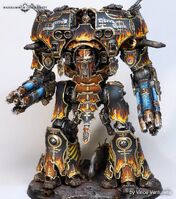 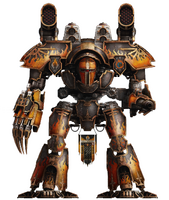 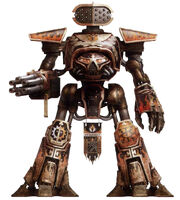 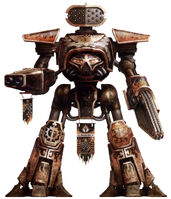 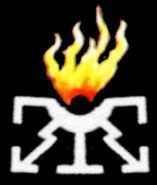 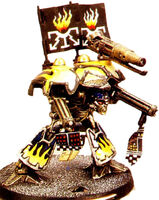