The Legio Solaria ("Imperial Hunters") are a Loyalist Titan Legion of the Collegia Titanica, one of the military arms of the Adeptus Mechanicus. The Legio Solaris is based on the Forge World of Tigrus.

This Titan Legion has a reputation for swift vanguard actions and devastating spearhead attacks. During the Great Crusade, this Titan Legion was often at the forefront of assaults upon rebel and alien worlds, its hunting packs of Warhound Titans running the enemy to ground or acting as scouting maniples for their brother Legions.

The Legio Solaria was founded by the aristocrat Mohana Mankata VI early in the Great Crusade after she was denied the right to pilot a suit of Knight armour on her homeworld, the Knight World of Procon, due to her gender. This was despite winning a horse-riding competition intended to decide which members of the Procon nobility could become Nobles of House Procon Vi.

Her skills nonetheless impressed the Tech-priests of the ancient Mechanicum, and she exiled herself to become the founder of a new Titan Legion based on the Forge World of Tigrus called the Legio Solaria with their aid.

Paying tribute to the traditions of the ancient Procon goddess of the hunt named Pahkmetris, the Legio Solaria went on to become an all-female Titan Legion, with vat-born, genetically-modified women serving as the Legion's princeps and moderati and the few number of males born into the Legion ordained as Tech-priests or converted into servitors.

The Legion became known for its embrace of its personnel's emotions and humane behavior in combat. It was renowned for its capacity to carry out ambushes and utilise hit-and-run tactics.

These tendencies put it at odds with the other military forces of the Mechanicum, which were known for their coldly logical and ruthless behaviour during battle. Under the leadership of Mankata, who was called "Great Mother," by her adopted "daughters," the Legio Solaria eventually developed the third best god-engine kill to loss ratio of any Titan Legion during the course of the Great Crusade.

In the final years of the Great Crusade, the Legio Solaria clashed with the Legio Vulpa after the Titans of Vulpa callously exterminated a city of 50,000 civilians during an Imperial Compliance action on the world of Dendrictia.

This attitude -- some would call it arrogance -- is bred into them following their induction into the Legion, including an aristocratic disdain for the "lower classes," even when said "lower classes" belong to other Legions of the Collegia Titanica.

However, this attitude also favours the Legion's integration into other battlegroups and Imperial Crusades, as the Imperial Hunters manifest none of the typical detachment prone to Adeptus Mechanicus-related military formations.

For instance, the Imperial Hunters' command structure does not include the position of Executor Fetial common to many Titan Legions, as each princeps and moderatus is well-versed in all manner of social etiquette.

Below the icon of the Legion, campaign honours and oaths of alliance are often shown, such as a star map depicting the warzones fought in by an individual Titan. Below this is the signum nobilis, or symbol of rank, that records the Titan's place within its maniple.

Livery shield with princeps personal heraldry of the Warlord-class Titan 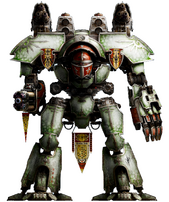 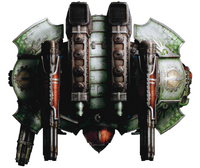 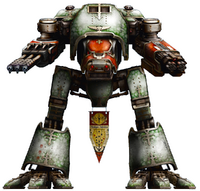 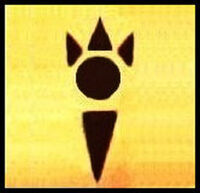 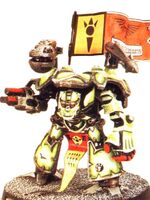