Warhammer 40k Wiki
Register
Don't have an account?
Sign In
in: I, Adeptus Mechanicus, Collegia Titanica,
and 3 more
English

The Legio Solaria ("Imperial Hunters") is a Loyalist Titan Legion of the Collegia Titanica, one of the military arms of the Adeptus Mechanicus. The Legio Solaris is based on the Forge World of Tigrus and its personnel are overwhelmingly female, a tradition established at the Legio's founding.

This Titan Legion has a reputation for swift vanguard actions and devastating spearhead attacks. During the Great Crusade, the Legio Solaria was often at the forefront of assaults upon rebel and alien worlds, its hunting packs of Warhound Titans running the enemy to ground or acting as scouting maniples for their brother Legios.

Like many Knight Worlds, Procon was rife with traditions and beliefs that harked back to its founding, lending support to a society far from egalitarian, where each person's status and role was determined more by blood than skill.

It was the ancient rites of Procon Vi, Knight household of Procon, that saw Mankata's victory in a horse-riding competition used to determine which members of the Procon nobility could become Nobles of House Procon Vi.

Instead of accolades, Mankata was rewarded with exile for having participated without permission. Punished by her own due to her perceived audacity, others were more forthcoming with praise and her skill attracted the attention of the ancient Mechanicum, who offered Mankata a place upon the Forge World of Tigrus.

Upon her arrival, she was proclaimed domina princeps of the newly-founded Legio Solaria, the first to join its ranks. By her edict, the princeps of the Titan Legion were drawn solely from the ranks of women, cultivated from her own genetic line, and the sole commanders of a god-engine drawn from Tigrus.

Paying tribute to the traditions of the ancient Procon goddess of the hunt named Pahkmetris, the Legio Solaria went on to become an all-female Titan Legion, with vat-born, genetically-modified women serving as the Legio's princeps and moderati and the few number of males born into the Legio ordained as tech-priests or converted into servitors.

In recognition both of her role as progenitor of the Legio Solaria and her leadership in the centuries following its founding, Mankata was given the title of the "Great Mother" by her princeps, holding almost divine status within the ranks of the Titan Legion.

Given the nature of the Legio Solaria's founding, born as it was from the pride of its Great Mother, it is perhaps unsurprising that the Titan Legion established a reputation for its bellicose and prideful princeps.

Nowhere was this more evident than in battle, for the princeps of the Legio Solaria would make great boasts in their search for glory while employing aggressive tactics that favoured the large number of Warhound-class Scout Titans the Titan Legion possessed.

There were some who served alongside the Legio Solaria who showed contempt for the seemingly blatant recklessness of the Titan Legion's tactics, yet many others were quick to praise its efforts upon the battlefield.

Regardless of opinion, the skill of the Titan Legion was undeniable when, during the latter decades of the Great Crusade, the Legio Solaria were recorded as possessing an engine kill to engine loss ratio greater than some of the largest and most ancient of Titan Legions, though such statistics varied as to the scale required for a slain foe to constitute an engine kill.

It was with great pride that the Legio Solaria accepted the title of "Imperial Hunters" bequeathed upon them, in part due to the impressive combat record they had amassed.

The nature of the Legio Solaria saw them forge strong bonds with Titan Legions of similar demeanour. Indeed, the Legio Gryphonicus was quick to offer praise to the younger Titan Legion, with both Legios noted as pushing each other to greater heights when sharing a battlefield, a circumstance attributed to the highly competitive nature of these Titan Legions.

Similarly, the aggressive tactics favoured by the Imperial Hunters saw them regularly paired with Space Marine Legions such as the White Scars and Space Wolves, with much of the Titan Legion's strength assigned to expeditionary fleets containing one or the other Legions.

The Imperial Hunters' service alongside others was not without incident, the most notable example being the long-held feud between the Legio Solaria and the Legio Vulpa, one that began during the Compliance of Dendrictia, when the Death Stalkers callously extinguished 50,000 lives in a single action.

Though naught but harsh words and official denouncements were exchanged, the two Titan Legions were bound together in hatred from that moment onwards, a rivalry that kept them apart during the Great Crusade and was reignited come the Horus Heresy.

The years following the appointment of Horus Lupercal as Warmaster brought much turmoil to the Legio Solaris, even before the Horus Heresy began. To outside observers, little changed in the Imperial Hunters' demeanour, yet, inwardly, the future of the Titan Legion proved unclear.

Much of this strife came from the degenerating health of the Great Mother and the expectancy of her approaching death. As founding domina princeps of the Legio Solaria, having commanded it since its creation, the anticipated loss of the Legio's foundation led to uncertainty amongst the ranks of the Imperial Hunters.

In some manner, the outbreak of the Horus Heresy brought a period of certainty to the Legio Solaria, for the conflict offered a new crucible in which the martial prowess of the Titan Legion was tested against that of more ancient Titan Legions and a place where old grudges could be settled.

Much of the Titan Legion's initial efforts to resist the Warmaster and his allies were focused on the Beta-Garmon cluster. It was there that the Great Mother committed the principal strength of the Legio Solaris, intent upon denying the Traitors access to the wider Segmentum Solar.

The unfolding conflict claimed the lives of dozens of Imperial Hunters Titans and eventually the life of Mohana Mankata VI herself, who fell in battle against the Traitor Titan Legions and the foul powers of the Warp they unleashed.

The Beta-Garmon campaign proved a turning point for the Legio Solaria, their numbers vastly reduced and the survivors deprived of the constant leadership they had enjoyed since their founding.

As Horus marched on Terra, the Legio Solaria fragmented, its number scattering across the galaxy during the frantic retreat from Beta-Garmon.

Many were to find their way to Terra under command of Esha Ani Mohana, the Great Mother's second-in-command, standing proud behind the walls of Terra in defiance of the approaching Traitors.

The remaining numbers of the Legio Solaria drifted across the stars, small battlegroups commanded by senior princeps awarded field command fighting on dozens of worlds, each striving to return once more to Tigrus and reunite with their sisters.

This attitude -- some would call it arrogance -- is bred into them following their induction into the Legio, including an aristocratic disdain for the "lower classes," even when said "lower classes" belong to other Legios of the Collegia Titanica.

However, this attitude also favours the Legio's integration into other battlegroups and Imperial Crusades, as the Imperial Hunters manifest none of the typical detachment prone to Adeptus Mechanicus-related military formations.

For instance, the Imperial Hunters' command structure does not include the position of executor fetial common to many Titan Legions, as each princeps and moderatus is well-versed in all manner of social etiquette.

Numerous descriptions of the Legio Solaria's tactical strength make note of the increased number of Warhound-class Scout Titans within its ranks, which far outnumbered that of any other Titan class.

Such instances were rare amongst Titan Legions and a census of the Legio Solaria's strength prior to its deployment to the Beta-Garmon cluster recorded a total of 104 god-engines of which 61 were Warhound class.

It should be noted that the strength mustered in the Beta-Garmon System was not the sole battlegroup of the Legio Solaria and several other Imperial Hunters battlegroups, of considerably smaller size, were unable to join up with the principal strength of the Titan Legion due to the effects of the Ruinstorm.

The Legio Solaris also held close bonds with the Knight house of Procon Vi, which hailed from the same world as the Great Mother. Over two dozen household banners were assembled alongside the Legio Solaria at the Beta-Garmon cluster, enhancing the Titan Legion's strength and tactical flexibility.

Below the icon of the Legio, campaign honours and oaths of alliance are often shown, such as a star map depicting the warzones fought in by an individual Titan. Below this is the signum nobilis, or symbol of rank, that records the Titan's place within its maniple. 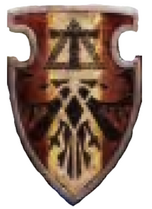 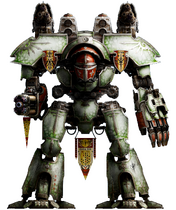 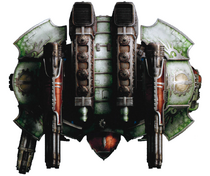 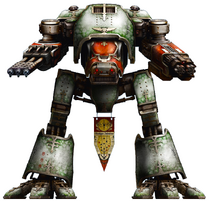 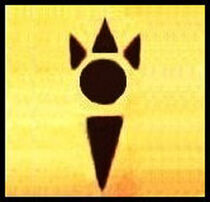 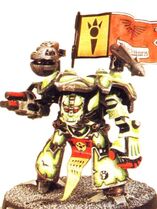