The Legio Oberon ("Death Bolts II") is a Titan Legion of the Collegia Titanica, one of the military arms of the Adeptus Mechanicus. Hailing from the Forge World of Anvari, the Legio Oberon were famed for wisdom beyond their years.

Despite joining the Great Crusade in its final days, they soon amassed a string of victories alongside the Ultramarines Legion, utilising the superior tactical knowledge of their princeps to unleash bold assaults intended to dismantle their opponents' tactics.

Years spent fighting alongside the Ultramarines during the Great Crusade saw the Death Bolts II's Princeps learn much from the thorough tactics of the XIII Legion. Legio Oberon often employs trained strategisers whose sole duty is to watch the enfolding battle and devise counters to enemy strategies.

When the Titans of this Legion march to war their battlegroups advance in tight formation, each Titan supporting the next to stand resolute in the face of incoming fire.

The prosecution of war is, to the Princeps of the Legio Oberon, an exercise in mental prowess, and their Princeps participated in games of strategy when not upon the field of battle.

The use of Warhound Titans proved a key element of battlefield tactics within the Legio Oberon during the campaigns of the Horus Heresy. When enemy movements were known, maniples of Warhounds would often be dispatched to strategic locations long before the Legio marched.

Operating as a hidden vanguard, the Warhounds would conceal themselves until the enemy line moved past their position. When the remainder of Legio Oberon engaged their foes in battle the Warhounds would emerge, assaulting the rear of the enemy, sowing disorder and panic in their ranks.

The Legio Oberon’s fleshsmiths and mechnicians had a penchant for augmenting their Skitarii’s arms with heavy rotary cannons.

The Titans of the Legio Oberon are primarily painted orange with black striping.

The sigil of the Legio Oberon is a black crown cleaved by a downwards striking thunder bolt. This symbol is centred within a white lozenge (diamond), outlined in gold. 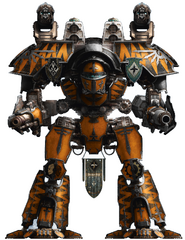 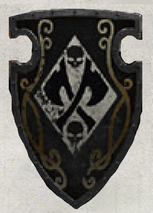 Legio Oberon livery shield with a Princeps' personal livery.
Add a photo to this gallery
Retrieved from "https://warhammer40k.fandom.com/wiki/Legio_Oberon?oldid=360795"
Community content is available under CC-BY-SA unless otherwise noted.