Black, Red, Silver and Gold (Pre-Heresy) / Green, Black and Silver (Post-Heresy)
The Legio Mortis ("Death's Heads") are a Traitor Titan Legion of the Dark Mechanicum that repudiated their oaths to the Emperor of Mankind and followed the Warmaster Horus into the service of the Ruinous Powers during the Horus Heresy.

Even before the Horus Heresy, the princeps of the Legio Mortis were known for their cold and calculating demeanour, keeping meticulous kill tallies, and often filling their command decks with servitor-choirs that droned out an endless list of all of their victims.

This cacophony of the vanquished drove the Titan's crew to methodical acts of destruction, each fresh kill adding another name to the chant.

There is very little information in Imperial records about the founding of this Titan Legion, though they are known to have been raised before the Age of the Imperium, during the Age of Strife, in the early days of the Cult Mechanicus' conquest of Mars.

The name of the Legio Mortis was feared and distrusted by many within the Imperium long before the betrayal and horror of the Horus Heresy was to unfold.

Originating in the pre-Imperial Age of Strife the Legio Mortis was, according to the legends of the Martian Lexmechanics, one of the Triad Ferrum Morgulus -- the three originating Titan Legions created by the besieged Cult Mechanicum during the bloody wars to take back the Red Planet from the degenerate hordes of Cy-carnivora and mutant scavers that had overwhelmed Mars after the fall of the first Human interstellar civilisation at the end of the Age of Technology.

The Legio Mortis served in this august body alongside the Legio Ignatum ("Fire Wasps") and the Legio Tempestus ("Storm Lords").

As was recorded in the iconography of their seal, the purpose of the Legio Mortis' creation was two-fold: firstly, to stand sentinel at the gates of the fabricator-general's domain as tireless guardians, and second, the annihilation of all life that would threaten the Machine Cult. As such, the Legio Mortis served as both sentry and exterminator.

Grim, dour and secretive, the Legio had gained a dark repute during the conquest of Mars as merciless and sinister that would only grow as the centuries passed, and it is now lost in time whether they gained their common name, "Death's Heads," from their iconography, the ritual onyx skull masks and sable robes their princeps wore, or their long practice of arraying the skeletal remains of those they had slain across the armoured pediments of their war machines as trophies.

Bound they were by rite and tradition in personal loyalty to the office of the fabricator-general of Mars, and many times were they used both against their enemies in war (for Mars was not truly pacified until the coming of the Emperor), and as a weapon to maintain the fabricator-general's authority among the tech-priests and punish recalcitrant magi and even other Titan Legions when needed.

This history garnered them few friends or allies and their long-standing rivalry with their fellow members of the Triad Ferrum Morgulus, most notably the Legio Ignatum, and their contempt for the "upstart" Titan Legions of other Forge Worlds than Mars was well-known.

In particular, the Legio Venator could not be trusted to fight alongside them without the threat of civil conflict erupting after the events of the Accatran Compliance during the Great Crusade.

Their reputation as an infamously fractious and insular force -- whose allegiance many within the Imperium's military staff believed remained solely to the fabricator-general and to the Emperor not at all -- resulted in the tragic irony of the Legio Mortis ' assignment to the personal flag of the Primarch Horus Lupercal of the Luna Wolves Legion for the purpose of guaranteeing and deepening the Titan Legion's loyalty to the Imperium.

Notwithstanding smaller battlegroups assigned to the Legio Mortis forge-fortress on Mars and to the blockade of the Uhn Holdfast, the bulk of the Titan Legion's active strength was assigned as the Titan backbone of the 63rd Expeditionary Fleet under Horus.

With that charismatic and deadly primarch they fought in over one hundred campaigns in the later decades of the Great Crusade, and the ashes of countless worlds and the bones of scores of different alien races adorned their god-engines.

During these years of blood and battle a new loyalty was indeed forged for the Legio Mortis, but it was not to the distant Emperor of Mankind but rather to Horus, and they became pledged to his standard above all, and followed him willingly into treachery.

Ironically, the Death's Heads would become corrupted by the Chaos God of decay, Nurgle -- a deity whose undead servants they had once fought against on Davin's moon, where Horus had been mortally wounded.

After the Warmaster's "miraculous" recovery from his wounds following his corruption by the Chaos Gods in the Temple of the Serpent Lodge, he began his rebellion against the Imperium by unleashing Life-eater Virus Bombs upon the world of Isstvan III, seeking to destroy elements of the Traitor Legions that were still steadfastly devoted to the Emperor of Mankind.

Elements of the Titan Legion had already descended to the surface where what few elements of the Legio that were not trusted were quickly purged.

It was to the Legio Mortis in their sealed war engines that Horus' plan had given the coup-de-grâce to the few Loyalist Astartes expected to survive the initial virus bombardment, but as matters transpired, what was to be an extermination to scour the survivors evolved into a wholesale battle.

Horus ordered the full Titan Legion deployed to smash the husks of the Isstvanian cities and break the Loyalists' resistance, and for the first time the Legiones Astartes met the Adeptus Titanicus in open conflict.

Some claim that mutated strains of the Life-Eater virus brought about their final corruption, while others say that the madness wrought by the sight of billions of putrefying corpses turned the Legio's faces to Chaos.

When the Horus Heresy became a full-blown insurrection, on Mars the traitorous Fabricator-General Kelbor-Hal of the Mechanicum decided to take the Warmaster's side in the conflict. The Legio Mortis supported the fabricator-general, being one of the first Titan Legions to fight in the service of the Ruinous Powers.

Open hostilities erupted all over the Red Planet as the civil war within the Mechanicum that became known as the Schism of Mars began. Loyalist and Traitor forces alike brought forth forbidden technologies to use against one another.

The Dark Mechanicum-aligned Legio Mortis eventually fought the Legio Tempestus in open warfare near Mars' Magma City, but these contingents of Death's Heads Titans were wiped out by the Loyalist Titan Legion that defended the forge city.

By the time the Legio Mortis landed on Terra to take part in the siege of the Imperial Palace during the Siege of Terra, its Titans had been warped and mutated beyond all recognition -- their adamantium hulls pockmarked and bubbling with fetid vapours.

The twisted flesh and metal of great tentacles lashed to and fro, spiked tails whipping about. The once-noble skull-faced heads adorning the Legio's Titans had now been transformed by the eldritch powers of Chaos into rancorous visages of drooling Daemons filled with malice, their engines roaring like angry beasts.

The Warmaster granted the Legio Mortis the singular honour of breaching the outer walls of the Imperial Palace. Using Wreckers, Power Rams, Warp Missiles and their own fiendish bravery they managed to accomplish this near-suicidal task despite suffering the loss of over thirty Titans in one evening of intense fighting.

The walls of the Imperial Palace finally broke under the onslaught by the Death's Heads Titan Legion -- the huge Warlord-class Titans of the Legion smashed their way through the last few metres of the bastion and unleashed a flood of Traitors into the inner courtyard of the Palace.

But despite their efforts, ultimately the Siege of Terra failed and Horus was laid low by the Emperor Himself. The remnants of the Legio Mortis fled from Terra hunted and pursued, system by system, to the Eye of Terror.

There, where the Warp and realspace overlap, time has flowed differently for the Death's Heads. They remain trapped in servitude to the Ruinous Powers, fighting the Long War against the forces of the Corpse Emperor that began ten millennia before, building their strength and testing the Imperium's defences for the time when they shall return and wreak terrible vengeance on all living things for the defeat of their beloved Warmaster.

Thanks to its ancient history and its close ties to the fabricator-general of Mars and his coterie, the Legio Mortis was one of the numerically largest and best-equipped of all of the Titan Legions at the outbreak of the Horus Heresy.

Conservative estimates place their disposition at or around 200 Titans in active service, as well as having 2 battalions of specialised support armour, 5 Skitarii Auxilia Legions and a close air-support phalanx of 9 squadrons bound to their service.

Only the Legio Destructor is believed to have been able to put more Battle Titans into the field at the civil war's outbreak. In particular, the Legio Mortis was known to possess a strong contingent of the most powerful classes of Titan: the Imperator, Nemesis and at least one Apocalypse Pattern war engine.

While the bulk of the Legion's Titans were Warlord, Reaver and Nightgaunt classes, Scout Titans such as the Warhound were represented in relatively small proportions to the whole.

The allied Knight houses whose Knights often served alongside the Legio Mortis include House Morbidia, House Ju'll and House Senica. During the Battle of Beta-Garmon the Legio Mortis was supported by House Devine, House Gotrith, House Oroborn, House Vextrix and House Xerathon.

The Pre-Heresy colours of the Legio Mortis were black, red, silver and gold.

Now that they are the corrupted followers of Nurgle, their Titans no longer resemble the once-proud war machines of the past.

They display the outwards signs of their allegiance to the Plague God, and are covered in all manner of putrescence, decay and filth.

The Legio Mortis badge is a skull centred in front of a gate with chains dangling from it. Half of the Cult Mechanicus cog symbol sits atop the gate. This symbolises the Legio's ancient mission of both standing sentinel at the fabricator-general's gates as the personal protectors of their domain, and annihilating all life that would threaten the Machine Cult, for the Legio Mortis served as both sentry and exterminator.

A variant of the Legion's badge is a horned death's head in front of a red-outlined blue delta (triangle) on a field of black. Below the death's head are rows of skulls, symbolising the Legio's skill at bringing death to its enemies. 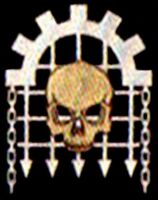 Icon of the Legio Mortis 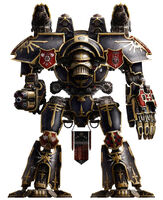 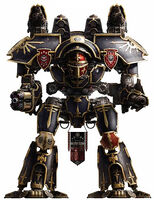 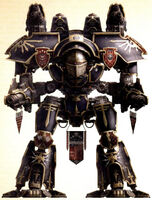 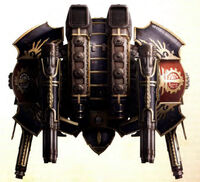 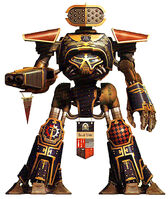 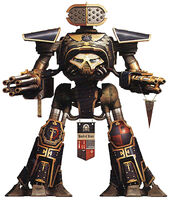 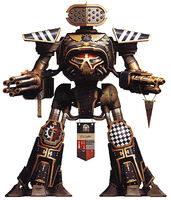 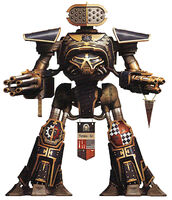 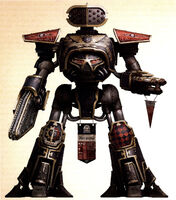 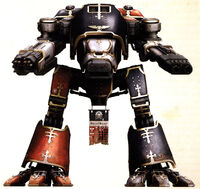 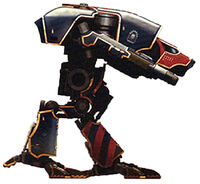 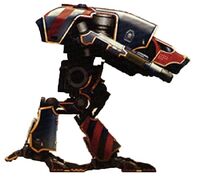 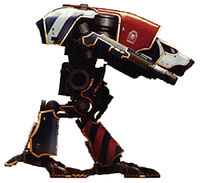