The Legio Metalica ("Iron Skulls") is one of the oldest and most esteemed Titan Legions within the Collegia Titanica, one of the military arms of the Adeptus Mechanicus.

It is believed that the Legio Metalica was founded before the Age of the Imperium, during the Age of Strife.

The Iron Skulls are veterans of centuries of conflict, predating even the Unification Wars of Terra and the Great Crusade.

During the Horus Heresy, at least part of the Legion turned to Chaos and the service of the Warmaster Horus at the Battle of Cruciatus Primus and still serves as a Traitor Titan Legion.

The Iron Skulls' home Forge World of Metalica lies within the Ultima Segmentum, situated in one of the most dangerous parts of the galaxy, near the Ork Empire of Charadon. They live in a constant state of readiness as they are always threatened by war.

The portion of the Legio Metalica that turned to the service of the Ruinous Powers during the Horus Heresy also fought in multiple campaigns against the servants of the Emepror over the centuries.

The Legio Metalica's colours are red, black, white and yellow.

The Legio Metalica's badge is a skull wearing a helm. Sometimes it is portrayed as a winged skull with lightning bolts behind it. 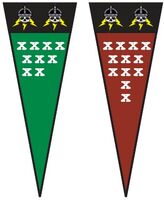 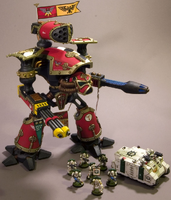 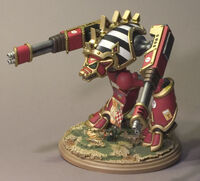